A New Hampshire track and field coach was fired after refusing to enforce a mask policy requiring students to mask outdoors while engaging in sport activities.

Coach Bradley Keyes was working at Pembroke Academy when the school introduced a mask policy that he called, “senseless, irrational, cowardice bullsh*t.”

In a letter to the school board Keyes explained why he would not enforce the policy.

“I will not stand up in front of the kids and lie to them and tell them that these masks are doing anything worthwhile out in an open field with wind blowing and the sun shining. These insane policies are robbing kids of once in a lifetime opportunities for no valid reason other than irrational fears and going along with the sheep.” – Bradley Keyes

Keyes told the school they could fire him, but that he was not backing down. The school did end up firing him.

“One of the fundamental parts of all of this is learning to play by the rules. The rules supposedly put in place in order to create a fair and level playing field, to let everyone know what is expected and allowed, and then to let the best man, woman, or team win. Except now we are adding arbitrary, senseless, ill-thought rules.” – Bradley Keyes

Interestingly the W.H.O. had put out this photo in July 2020 stating that wearing masks while exercising could potentially be dangerous 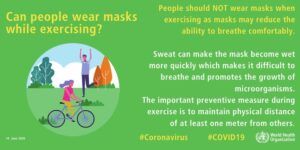 Biden: If You Don’t Get Vaccine, You Are “Lazy” and Could Kill People