EXCLUSIVE INFO: Just how well organized were the rioters in Minnesota?

The siege on law enforcement in this country has been ongoing for almost a year now.  The recent trial of Derek Chauvin and the shooting of Daunte Wright turned the Minneapolis region into a powder keg, ripe for crime.  Law enforcement is under attack from all sides including protestors, media, politicians, professional athletes, woke corporations and even their own administrations.

Recently, an anonymous source inside of law enforcement in the Minneapolis area has provided documentation to ‘Patriotically Correct Radio’ here at Red Voice Media showing just how bad it has become. They did so because they feel their voices aren’t being heard, and they are not getting any support from their departments.

The protests that have often evolved into violence and property damage were not spontaneous events. These crime sprees had planning, used tactics, rioters traveled in from all over the country, and they even used surveillance techniques to obtain information from law enforcement.  This is the first release of documentation, more to come soon.

There is evidence of protestors arriving in Minnesota from all over the country to engage in criminal activity in the name of “justice.”

Information was obtained about a “New Orleans-based individual posting on social media being in the area of the unrest in the overnight hours of 12 April to 13 April. The individual is reporting to be “able to move a crowd” and is making calls to action to her supporters to get to Minneapolis throughout the next two weeks.”

From a document, “On 12 April, a citizen tip came into law enforcement indicating a Chicago-based subject booked a flight, claiming that they “Missed the Last Looting”…”Shidd Ian Missing this one.. Minnesota Here I Come” with a screenshot of air travel information. 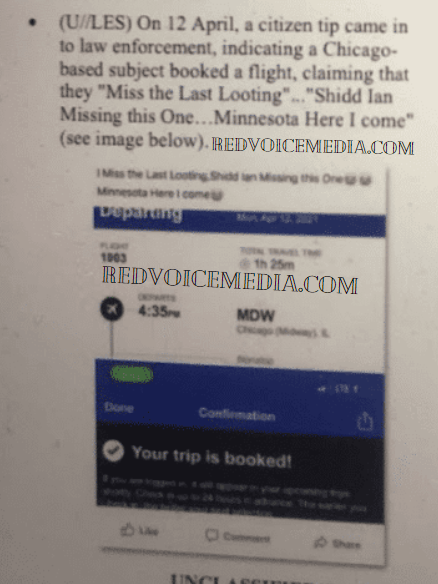 Just how many out-of-state rioters were there? We can only judge by arrest stats. In a document obtained, law enforcement reported 73 arrests on April 13 in the Brooklyn Center area. Of the 73 arrests, 10 were made from out of state.

From another image obtained, “On 12 April, a Twitter post reported on State Patrol’s movements based on radio traffic being monitored.”  The Tweet read, “scanner at 19:00 state patrol is going to come up from the south and east and they will issue the dispersal orders at that time. they will try and disapate* the crowd to the north, after the announcements have been given multiple times, we’ll keep pushing them north…”

Why do “peaceful protestors” need to monitor law enforcement communications?

How well organized were the rioters?

From a law enforcement document provided to us, “An individual posted an image online that pictured approximately 28 gas masks and offered them to “Black organizers who plan to be protesting tonight” along with the following image. 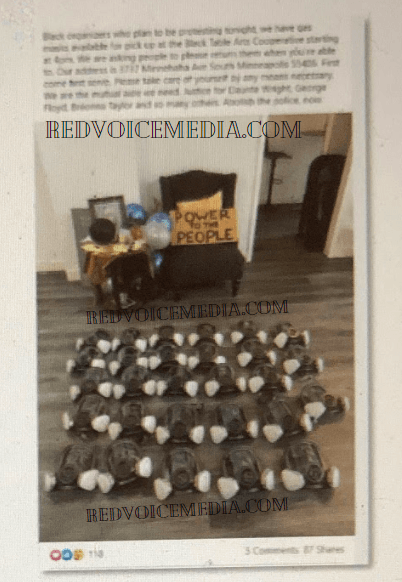 From another document, “On 13 April, a local activist group posted the image (pictured below), guiding followers on what to wear to protests to stay safe.” The image shows respirators, impact/chemical goggles, black umbrellas, balaclava, helmet, and heat resistant gloves. 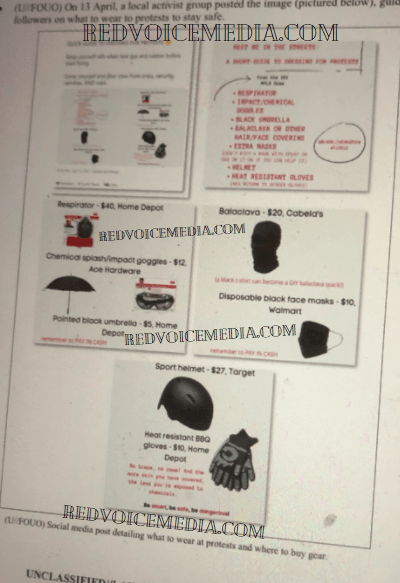 From an April 11 law enforcement bulletin, “Supplies for demonstrators were placed across the street from BCPD. Included in supplies are milk, water bottles, helmets, goggles, and hand warmer.” 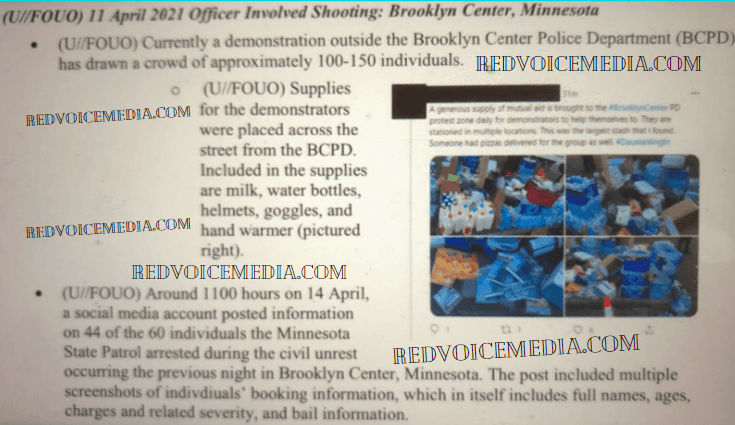 Fundraising was done to get more people into the Minneapolis area to “protest.”  From another law enforcement bulletin, “On 14 April, a GoFundMe account was created for a Black Lives Matter organization out of Florida requesting donations to fund the member’s travels to MN to “support the Wright family and stand with them as they fight for justice for Daunte.”