EXCLUSIVE: Assaults On Law Enforcement, Witness Intimidation, And A Look At The Aftermath

Police are under attack in Minnesota, and the public isn’t being told about much of it.

Recently, an anonymous source inside of law enforcement in the Minneapolis area has provided documentation to ‘Patriotically Correct Radio’ here at Red Voice Media showing just how bad it has become. They did so because they feel their voices aren’t being heard, and they are not getting any support from their departments.

From the document, “On 04/13/2021, at 2231 hours, a SPPD (*Saint Paul Police Department) sergeant was working in a detail of unmarked SUV, while wearing street clothing and was stopped momentarily in the area of Hoyt/Barclay.  The sergeant noticed a vehicle behind him, although the vehicle pulled into a driveway nearby.  A short time later a suspect from the vehicle that had pulled into the driveway fired multiple rounds striking the unmarked SUV. The suspect vehicle then fled southbound Barclay to an unknown location. Barns 10mm AUTO casings were recovered at the scene.”

This seems like a serious attack on law enforcement, I wonder why it wasn’t all over the media? 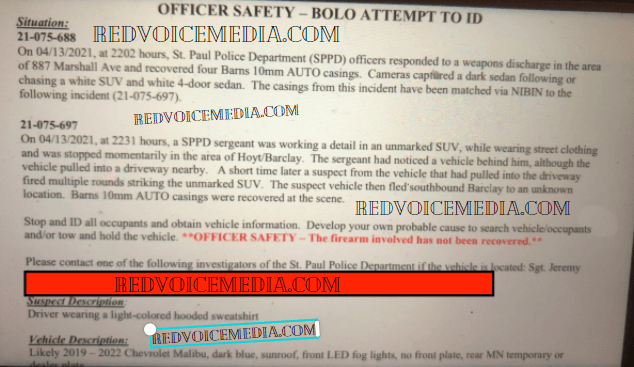 From a document, “Following the testimony of Hennepin County Medical Examiner Dr. Andrew Baker on Friday, 09 April, threats to the medical examiner began to appear online. In June 2020, Dr. Baker ruled Floyd’s death a homicide; he stated during his testimony that although fentanyl and methamphetamine levels may have played a role in Floyd’s death, they were not the direct cause and that his opinion regarding the manner of death remains unchanged.  At the time of this reporting, the threats appear unfounded.”

A social media post attached read, “I’m sorry, but Dr Andrew Baker, is dead meat walking.  Floyd died from murder not drugs, not heart disease, not anything else. Let those who want to fix you, fix you.  You’re part of the police plan over the years.  This must come to end NOW, starting with you!” 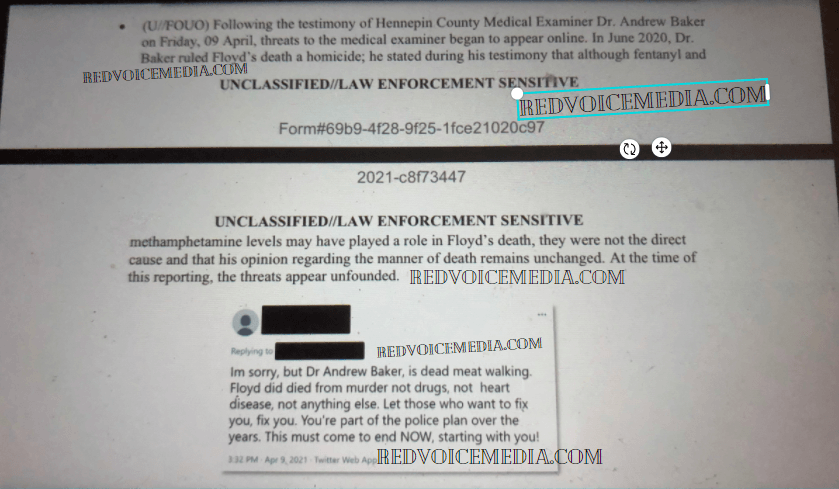 During the mostly peaceful protests at the Brooklyn Center Police Department on April 13, there was an attempt to breach the gate of the station.  From the document, “On 13 April, at approximately 2120 hours, a vehicle attempted to breach the gate at BPCD.  A chemical irritant was dispersed into the vehicle in order to gain compliance, and the suspect was taken into custody.  No known injuries to any officer(s).” 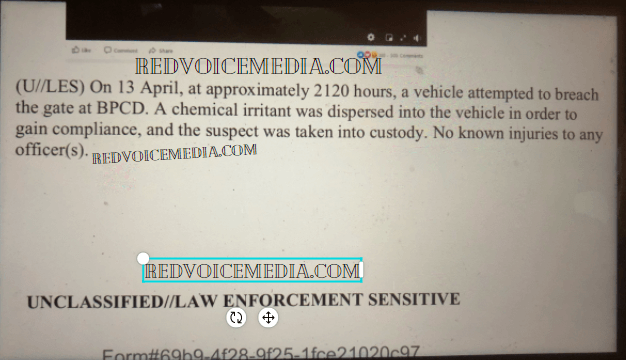 So how much damage was done in the Minneapolis metro areas? This document details the damage, and shows locations of 76 buildings that have reported damage and/or vandalism as a result of “current civil unrest” as of 8:50AM on April 13. 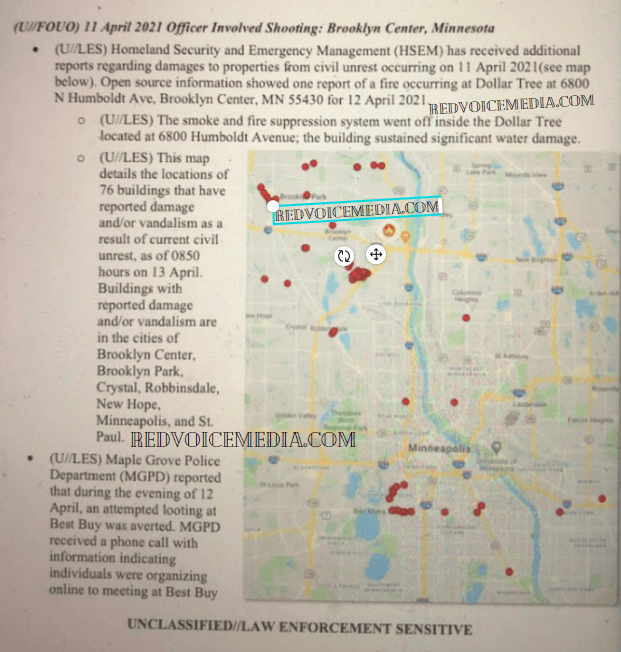 We published the first set of leaked law enforcement documents detailing the planning, organization, out of state travel and funding of rioters. Read it here.  Have a tip and want to keep it confidential? [email protected]