Why does the media promote criminals in the name of 'social justice'?

Minnesota media darling and BLM activist Chaz Neal was arrested on April 9 for a warrant stemming from a conviction in an unlawful sex with a minor case.  The warrant was issued by a Fillmore County Judge for failing to register as a sex offender.

Chaz Neal has been an outspoken BLM activist who has placed himself in the center of the fight for ‘social justice.’  Media such as USA Today, Axios, Star Tribune, Vice, and The Guardian have all run stories including Neal in their joint fight against ‘systemic racism.’

See Chaz Neal’s latest arrest occurred in Hennepin County on April 9th, and he has since been transferred to Fillmore County and is in custody.

Neal was also arrested on April 1 for a trespassing charge, but was released to the Hennepin County Medical Center.

Chaz Neal does not hide the fact he is a registered sex offender. He openly admits it in his Facebook page named “Chaz Neal For Human Rights Commission‘ where he has titled himself a “community activist.”  Neal has used this platform to attack local police leaders accusing them of racism and has also appeared and made comments at Pine Island City Council meetings seeking to have the city establish a “human rights commission.” It is unclear at this time if the city has some type of  “Sex Predator Victim Commission,” but Red Voice Media is looking into that.

Inside of the Facebook “Chaz neal for human rights commission” group we found a post from Neal: 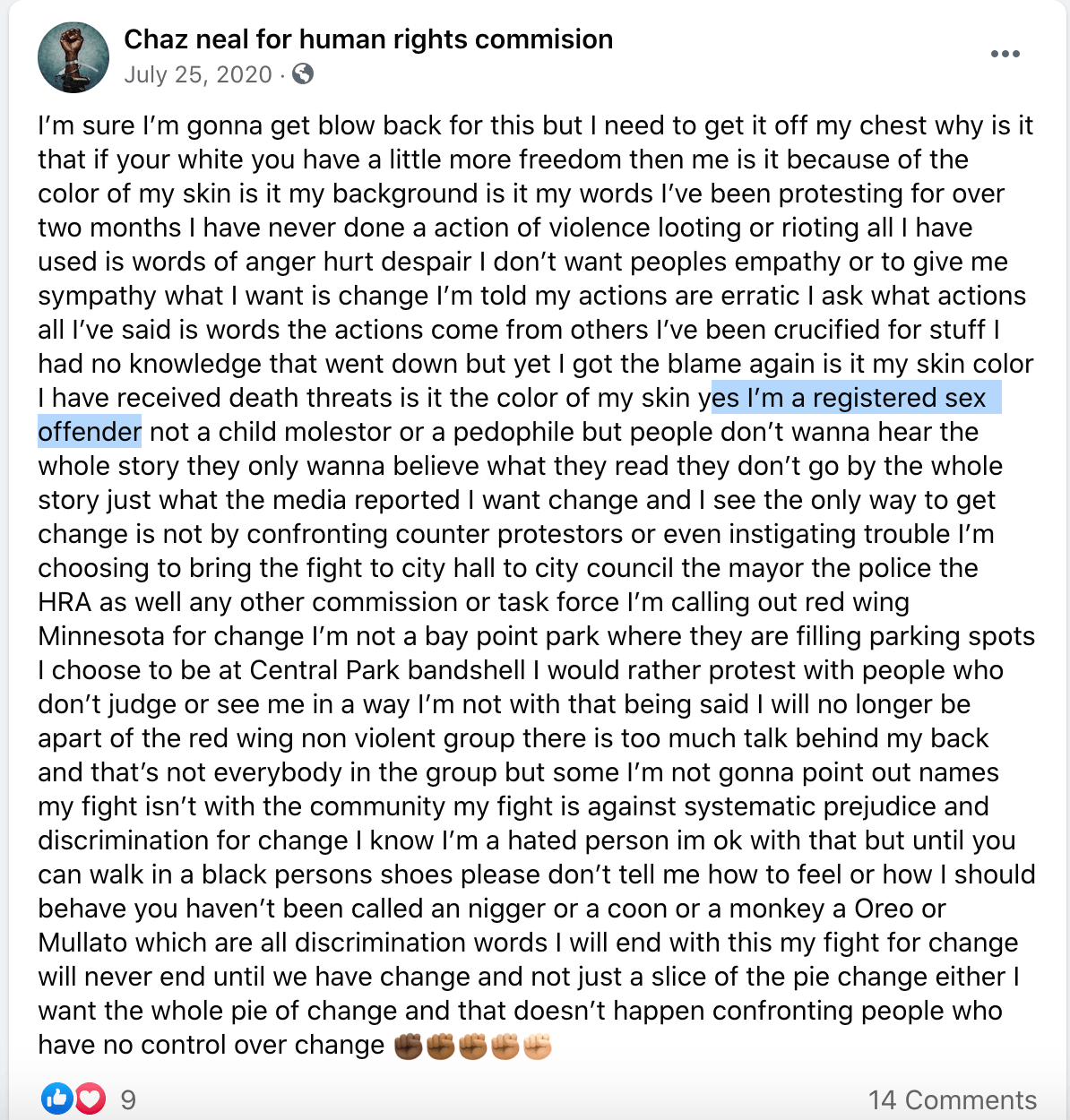 Apparently Neal feels people need to hear the “whole story” about his sex offender status, that may change things.  Looking at Chaz Neal’s public criminal record, which took a while, revealed the following CONVICTIONS in Minnesota:

First, the original sex crime charge he was convicted for under Section 609.344.1b – Criminal Sexual Conduct In The Third Degree, defined as:

(1) A person who engages in sexual penetration with another person is guilty of criminal sexual conduct in the third degree if any of the following circumstances exists:

Neal has been convicted THREE TIMES for failing to register as a sexual predator, which was also the same charge in his most recent arrest.  The rest of the highlight reel for Chaz Neal criminal convictions are: damage to property, theft, disorderly conduct twice,  deprive parental rights twice,  offering forged checks, financial card fraud, and 5th degree domestic assault.

It seems Neal is proud of his arrests, as he posted this detention on his Twitter account:

This me yesterday morning I was arrested and let go after about a hour I was silently sitting in the street with my sign for justice and peaceful protest but Minneapolis police have other plans and want to keep violating our first amendment rights https://t.co/vgxjqFdrM1

So the question is, how does a self-admitted, self-promoted convicted sexual predator get so much media attention? In looking at recent coverage Neal has received, we found he has been featured and quoted multiple times in the last six weeks in national media outlets.

In The Guardian Neal was featured by both photo and a quote, in Vice he was again quoted with a picture, both the Star Tribune and Axios published his photo, and USA Today quoted him as well.

Why does the leftist media feature convicted criminals and thugs as heroes in a fight against social justice? Look at how they portray George Floyd as a martyr and hero, but in truth he was a career criminal and drug addict.  Duante Wright from Brooklyn Center had been arrested for both illegally possessing a firearm and an attempt robbery where he allegedly choked a woman.  In Chicago, where 13-year-old Adam Toledo who is a gang member on the street known as ‘Lil Homicide,’ was shot and killed by Chicago Police after allegedly running from police with a gun in his hand. The media paints Toledo as a ‘good boy’ who was sweet and innocent.

The list goes on and on. The media will spin and massage the truth about these violent criminals police encounter to turn public opinion against the police, no matter what the facts are. They feature and platform sexual predators and criminals in their fight to install ‘justice’ against ‘systemic racism.’

It starts from the top. Black Lives Matter is a corrupt Marxist organization ran by corrupt leadership. Their Co-Founder, Patrisse Khan-Cullors, has been in the news recently as reports of her real estate spending sprees come to light, reportedly spending $3.2 million on real estate alone in just the last two years.  Apparently oppression pays very well.

As for Chaz Neal? I’m sure he won’t be in custody long and will be back on the streets fighting against ‘police racism’ and failing to register as a sex offender, look for him on the front page of a leftist rag.