An anonymous source inside of law enforcement in the Minneapolis area has provided police intelligence documents to ‘Patriotically Correct Radio’ here at Red Voice Media detailing the extent of the chaos that has occurred in Minnesota recently. They did so because they feel their voices aren’t being heard, and they are not getting any support from their departments, politicians, the community, and definitely not the media.

The previous leaked documents we published detailed how organized rioters have become, as well as threats against law enforcement that were not reported by the media. In this document release, we detail even more chaos that you probably never knew about. You can download this new set of documents here.

Surveillance On, And Threats Against Law Enforcement

In this section, a look at police intelligence reveals Pro-Al Qa’ida social media accounts encouraging rioters, individuals attempting to stage photographs depicting the National Guard in a negative light, reports of 20 charter buses with BLM protestors, drones being used against law enforcement, people surveilling National Guard at the hotel they were staying at, bounties on law enforcement, equipment such as armor vests found at the airport connected to Portland rioters, threats to kill law enforcement, and protestors showing up at police calls after listening to dispatch broadcasts.

“On 20 April around 1300 hours, a Soldier on duty at Nicollet Ave. and 7th St. S. in Minneapolis was approached by an unknown individual (…) After having a conversation, the unknown individual dropped to their knees and held their hands over their head for a few moments.  The Soldier witnessed a photographer across the street capturing the event, possibly in an attempt to negatively portray the MN National Guard.”

“On 2o April, A Twitter user claimed a truck driver friend was on I-90 headed from South Dakota to Minnesota and witnessed “over 20 fancy charter buses of people with BLM”

From a Tweet, “A truck driver friend of mine is on interstate 90 I believe he said. He’s in South Dakota heading east toward Minnesota.  He said he saw over 20 fancy charter buses of people with BLM posters heading into Minnesota just minutes ago.”

“A white male was observed setting up to launch a drone in the area of 3rd ave / 7th st, but instead packed it up and moved along without launching.”

“On 21 April, law enforcement reported that a Minnesota-plated Black Dodge has been seen circulating the parking lot at Double Tree Hotel for the past three days…  The Double Tree Hotel is one of the two locations that is housing the National Guard.”

“An unattended bag was located at the MSP airport on 19 April 2021. The bag contained a gas mask, body armor, and various other items.  The bag belonged to an individual traveling from Oregon.”

“The co-traveller of that individual, Alonna Christine Mitsch, had a prior arrest in Portland, OR, for failure to comply with directions during a protest in November 2020.  At that time she was in possession of a concealed handgun.”

“On 19 April, law enforcement received reporting that gang members in Minneapolis-area are putting bounties on law enforcement.  This information remains unconfirmed and unvalidated at this time, however, it is being shared for situational awareness. ” 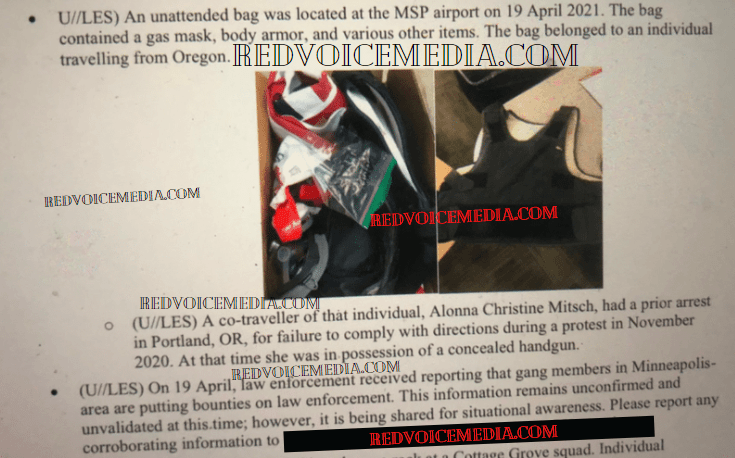 “OFFICER SAFETY – MSU229 Maroon 2000 Saturn LS2, Driver Jonathan Andrew White, 6/9/1992, shot his girlfriend in St Paul and made suicidal statements saying he is looking for an armed confrontation with officers and would approach officer and have a shootout. Blk handgun NOT recovered.”

“…Red or maroon Ford F150 with a red topper. Vehicle was following State Patrol and driving recklessly, passing in front of the troopers by less than a foot, indicating that intent to strike the troopers…” 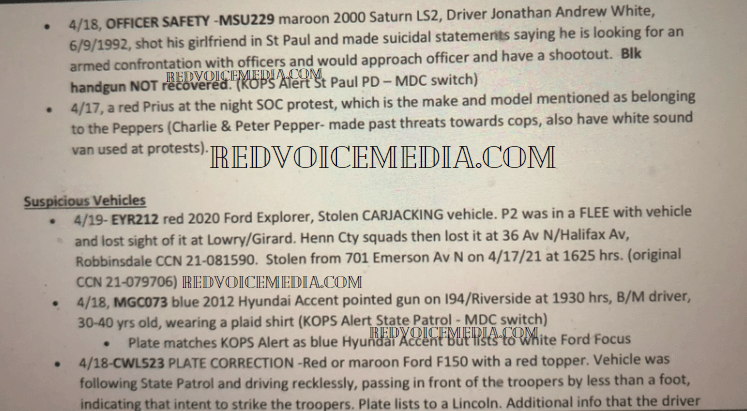 “4/20, Parties in the area of 39/Park Shooting have been listening to the radio and responding to calls in P3.  So far not threatening at 2332 hrs from Squad 311.  Update from dispatch at 2336 hrs: “Per Car 9, due to community members and poss media apparently listening to scanners and responding to calls in the 3rd PCT, all Priority Calls in PCT 3 and PCT 5 will be digitally dispatched until further notice.”

“Jermaine Alexander formerly identified as Jamal LNU has made threats that he wants to kill a police officer. Alexander is a felon, but it thought to be carrying a firearm.”

“On 19 April, between 0200 and 0430 hours, two DNR (Minnesota Department of Natural Resources) squads parked at Country Inn and Suites (…) in Shoreview, Minnesota, were broken into.  The incident resulted in smash squad windows, one missing rifle, and a missing brown squad leader bag.  The rifle was secured, but the lock was defeated.”

This section reveals the digital warfare against law enforcement, including a massive data hack against the City of Chicago and the Chicago Police Department and the doxxing of former Brooklyn Center Police Officer Kim Potter.

“According to open sources, the City of Chicago and the Chicago Police Department may have been hacked by the ransomware group known as C10p, with hundreds of thousands of official documents leaked on the dark net.  The act is speculated to be revenge for the killing of 13-year-old Adam Toledo.”

From the Tweet, “As revenge for the killing of Adam Toledo, #ddosecrets just hacked and leaked 200,000 emails, 50,000 documents, and nearly 750,000 images from the City of Chicago and Chicago Police Department.” 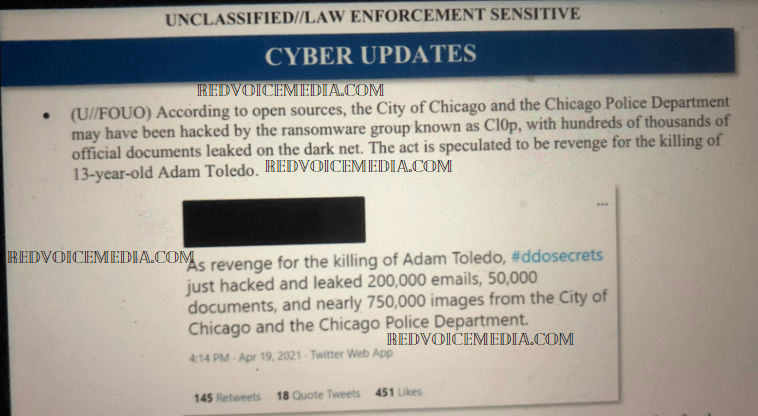 MORE NEWS: New Yorkers Fled To Florida In Droves During The Pandemic

“Several social media users continued to share the possible home address of former Officer Kim Potter, with one stating, “Kim Potter!!!!! You Next. Accountablity.” Multiple social media posts shared the sentiment that Kim Potter was “next.”

This section details high profile individuals entering the Minneapolis area such as the self-proclaimed leader of the “Trans BLM” from New York and James Barnes, who is tracked by the FBI.

“4/20 On 20 April 2021, James David Barnes III (…) booked a last minute flight from New York to Minneapolis, Minnesota.  Barnes is noted in NCIC as possibly armed and dangerous, though FBI has no information Barnes has exhibited any violent behavior or indicated he has access to weapons (the NCIC designation as armed and dangerous may be an administrative error).  Barnes traveled alone to Minneapolis and left the airport in a rideshare.  He is in NCIC and if encountered, a suspected terrorist handling code 3 record will appear for him.  FBI Minneapolis is coordinating with FBI New York regarding Barnes and his activities.” 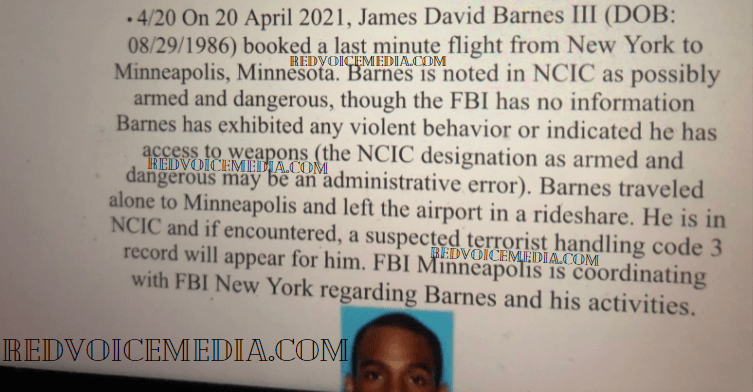 “4/20 From NYPD – Joe Rivera is known to be in Minneapolis.  He is a self-proclaimed leader of the Trans BLM in Manhattan.  He has been arrested several times for disorderly conduct and is know to be confrontational with police.” 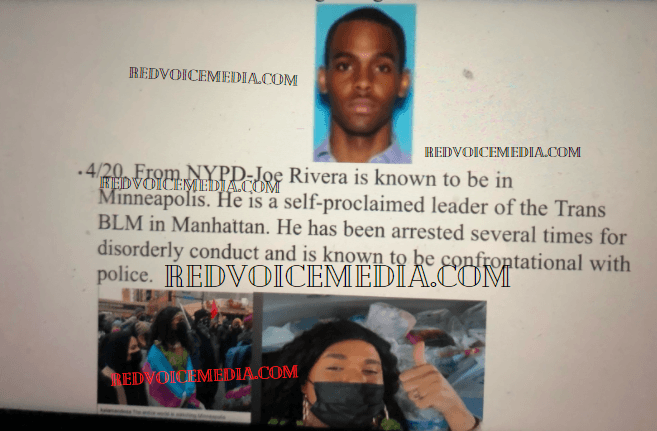 “An ad on Craigslist is calling for Minneapolis rioters and protestors to go on Facebook Marketplace and get all the bricks and glass blocks people are offering for free.  It is also suggested freezing water bottles, cheap ones, from HyVee to use. (…) Facebook released a statement indicating they have labeled Minneapolis “high-risk” and will remove posts from their platform that incite violence.” 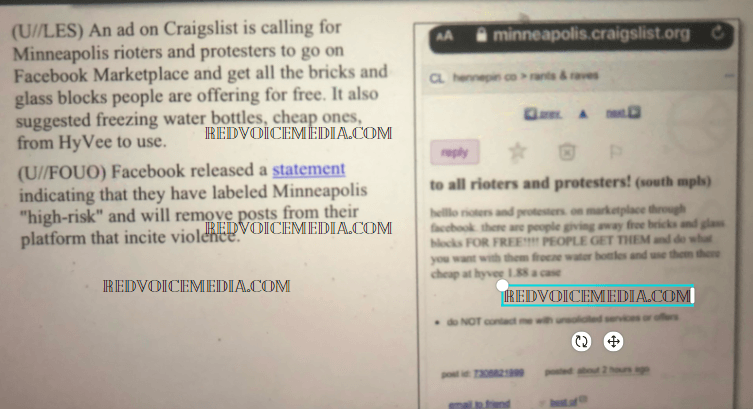 Intelligence documents reveal a fire was deliberately set at a church in Minneapolis.

Video from Sky4 earlier this evening of a 2-alarm fire at a church in northeast Minneapolis. Firefighters say no one was inside the church when they arrived. Much of the roof has since collapsed.

More on @WCCO at 10. pic.twitter.com/bCn6l8uRzL

“The ATF has confirmed that the fire on 19 April at Sacred Heart of Jesus Parish in Northeast Minneapolis was deliberately set.  An investigation by the ATF is ongoing.”

“Between 11 and 21 April 2021, state and local law enforcement in the FBI Minneapolis AOR arrested approximately 282 individuals for criminal acts following the 11 April officer involved shooting in Brooklyn Center, Minnesota, and in relation to the trial of former Minneapolis Police officer Derek Chauvin who was convicted for his role in the death of George Floyd.  Law enforcement arrested 30 (6%) individuals who were not Minnesota residents.”

While reporting on previous leaked information, Patriotically Correct’s Stew Peters had his YouTube channel demonetized after a hit piece was written by a Silicon Valley newspaper calling for the takedown of the video. We work every day to bring the truth you won’t see in mainstream media, and your support is always appreciated.

Have a tip? Email us at [email protected] in confidence.

New Yorkers Fled To Florida In Droves During The Pandemic