Mr. Biden Gets SLAMMED Over Vaccine and Mask Ultimatum To Americans | Tucker Carlson

The other day, Mr Biden Tweeted out an ultimatum to the American people: “After a year of hard work and so much sacrifice, the rule is now simple: get vaccinated or wear a mask until you do.” We’re not certain Mr. Biden has the cognitive ability to understand how that sounds to the American people, especially after trying to tell them how they can celebrate Independence Day recently.

Anyway, Tucker Carlson breaks it down…

Tucker wasn’t the only one who chimed in on Mr. Biden’s unconstitutional ultimatum. Twitter went wild and it proves once again that many American’s really don’t like being told what to do. Rep. Lauren Boebert and The Hodgetwins had a few words…

Alternatively, you could stop micro-managing our lives. https://t.co/2qyY5S7vY4

Take the Jab, or Muzzle for Life – The Ultimatum is NOT an Accident, and We Know Why!

MORE NEWS: Crazy Lady Punches McDonald’s Workers Over Her Slushie, Gets Her A** Beat

The Hodgetwins and Rep. Boebert weren’t the only ones. Many other lesser know people and everyday Americans also chimed in, many with some strong words, suggesting just how tired of all this BS people really are.

It’s not a rule, you disgusting megalomaniac. https://t.co/kNr3I1mkeA 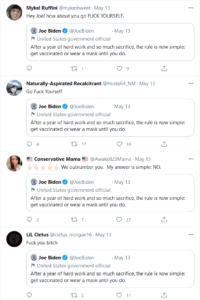 Crazy Lady Punches McDonald’s Workers Over Her Slushie, Gets Her A** Beat