A shocking bodycam video [1] released on Monday by Fox News reporter Bill Melugin showed a woman in a racist tirade against a hispanic Los Angeles County Sheriff’s Deputy.  In the video, the woman claimed to be a teacher in between her despicable ranting, which turned out to be true. Watch the original video, then you can meet the Professor.

The driver was identified by dozens of social media users as well as the TB Daily New [2]s as Kalunda-Rae Iwamizu, and alternate names she goes by: Kalunda Jenkins and “Kali Kross.”   Here’s a video without the blurred face so you can catch a better look:

A little digging by social media users enraged by the video revealed she is an assistant professor [3] of English at Los Angeles Southwest College.  Images published by TB Daily News show an initial search confirming Iwamizu is on staff at West LA College, but things change quickly on the internet…  later in the day she was removed from the same faculty and staff listing (below). 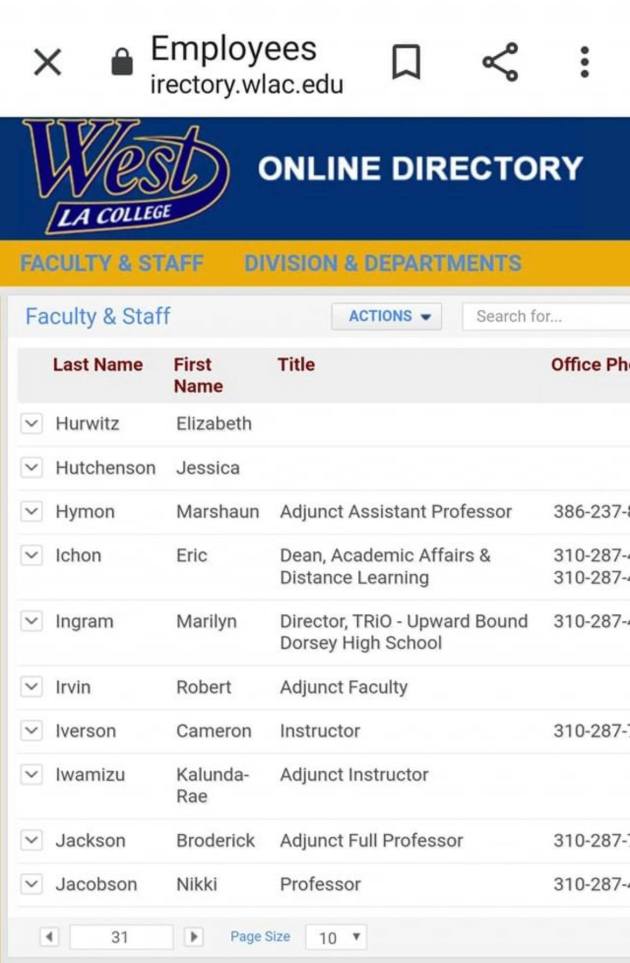 Now why would the school remove her from the directory? Feel free to call the school president, James Limbaugh, at his office to ask (310) 287-4325.

A check of public employee records at TransparentCalifornia.com revealed Iwamizu earns about $100,000 a year from public funds as an adjunct professor.  In the TB Daily News report [2], you can read through the screenshots of her anti-police posts, including all of the social media accounts she has since locked after her identity was revealed.

The deputy who recorded Iwamizu did it with his personally owned bodycam, since his station has yet to issue them.  Imagine if he hadn’t, would the LASD have taken the complaint she made after this stop seriously?  L.A. County Sheriff Alex Villanueva has praised the Deputy for his professionalism, weighing in here on Fox.

Sheriff Villanueva said, “She claims to be a teacher. I’m not so sure where she is teaching… but if she represents her profession, is that an indictment on her profession and the caliber of people?”  He continued, “You have one incident like George Floyd… but some people want to label the entire profession as if everyone was a Derek Chauvin. It shows you that bigotry, racism comes in all, colors and all ages — that’s proof of that right there. If you want to call all of the deputies murderers, unfortunately, you are doing the exact same thing you’re accusing other people of doing against your own kind.”

This incident raises the terrifying question, just how many professors hold these beliefs and spread them to their students every day in America?