Tucker Carlson: Candace Owens has been watching all of this. She understands that symbols do matter. She’s the host of Candace. She joins us tonight with a reaction to all of this. Chicago, Candace thanks so much for coming on, is really kind of a case study in what happens when you apply bad policy.

Candace Owens: That’s absolutely right and Lori Lightfoot, I mean she’s a disaster. And I think, first and foremost, people take a glance at her and the first thing you think is this is a woman who is an avowed racist. And you might look at that and say, well that’s obvious because she says she doesn’t want to speak to any White reporters and only Black reporters but I think actually Lori Lightfoot is abundantly racist towards Black Americans, right? So she pretends. Don’t pay attention to what she’s saying, pay attention to what she’s doing. She’s pretending that she represents Black people when she gets in front and says I only wanna speak to Black journalists. But that’s meant to be a distraction. Actually look at her track record. Who is it that she’s, have her policies lead to the mass homicide of? Black people. Black people are dying on the streets of Chicago. Black people are the people that are suffering when you know in the first quarter of this year, 34% homicide rate increase. It’s Black on Black crime and she has seen this through. The more important thing though, when you showed a clip of her earlier and she started talking about we need help. We need help. Do you recall, Tucker, a few months ago when I said to you that the entire Defund the Police movement, the entire purpose behind what the Democrats do, they don’t do anything without purpose. They are always taking up part and partial of a Machiavellian scheme. I said to you, Tucker, that they are going to start requesting, while the streets are getting bad enough until they say we now need Federal help. And at that moment you’re going to see them start talking about a Federal police. They’re going to want to see Federal policing happening on the grounds of these inner cities. I believe that has been the long game the Democrats have been playing. this is why they have been undermining the local police at every second. Because they are looking to give more power to the Federal government. This is what is happening in Biden’s America and I believe that this is just, really what we’re seeing is just a faster spread toward America shifting towards a Federalized police system in this country.

Tucker Carlson: I think that’s really smart. I hate to believe, and I remember when you said that I remember thinking boy I hope that’s not true because it’s just so awful that you would create chaos, to allow hundreds, thousands of people to die just so you become more powerful. But I think you’re absolutely right. And so in other words, they did, none of this accidental. They knew defunding the police get a lot of people killed. How could you not know that?

Candace Owens: Of course they knew that. And you look around, you have to study history and that’s why I’ve said you see them, they’re calling themselves Socialists. They’re hitting the ground. They’re demanding Socialism. Well lets actually take a look at what Socialism has been around the world. Socialism has lead to the death of 100,000,000 people all across the world. When you look at Communist/Socialist regimes of the past, this is what you see. The Federal government needs more and more power and they need to make sure they take it away from local. So they are taking this away from locals. So the Democrats put this plan into place and now it’s speeding up. So she’s not helpless. She’s saying we need help from the Federal government, we need help from the Federal government so that eventually people on the streets are gonna say please, anybody help us. And you’re going to start to see real crimes from the Federal government when they put their boots on the ground and start saying okay, now we have complete and utter control. It is not chaos. From chaos, dictatorship arises. That is the lesson of human history.

Tucker Carlson: It’s amazing. You make it, I’m completely sold. Chris Wray, we’re gong to need to expand FBI by, you know, 3X so they can keep order in Chicago. Candance Owens, thank you.

Tucker Carlson: HAAAA… Every day! Tell me that 14 more times and I’ll believe you with some exclamation points. Candace Owens, great to see you.

If you missed the joke at the end of that segment, Mayor Lori Lightfoot had sent a ridiculous office email where she repeatedly repeated herself… 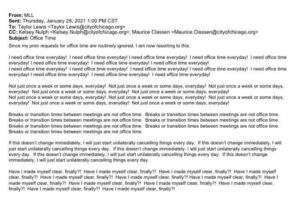