Lauren Boebert took to the House floor on Tuesday and delivered a speech that hilariously took down the Anti Freedom loving Democrats in defense of the Second Amendment.

***JOIN US ON TELEGRAM***
“Madam speaker i want to begin this evening by thanking my democrat colleagues for their outstanding work and encouraging millions of Americans to celebrate their second amendment rights by purchasing their first, second, or even 100th firearm. From the Left’s riots and cities across America to Biden’s threats to strip away our basic constitutional rights. Democrats are single-handedly responsible for the sale of tens of millions of firearms. Bravo. Well done and I hear that the interest has begun to pique when it comes to the sale of F-15s now. I have some questions for these freedom haters. When are you going to call on the chief executive, the basement dweller, to hold his own son accountable for his gun crimes? Hunter Biden lied on a federal firearms application which is punishable by up to 10 years and a $250,000 fine of which ten percent will not be going to the big guy. Rules for thee but not for my crackhead Parmesan smoking gun criminal son. What about the disposal of Hunter Biden’s gun in a back alley dumpster? And why was the Secret Service involved in locating this firearm? Can you just imagine for half a second if Donald Trump Jr was involved in firearms crimes and his dad ordered the Secret Service to cover it up? That’s just the start of the hypocrisy. Biden will call widely purchased firearms weapons of war but then he’ll tell you that you need an F-15 or a nuke to keep the federal government in check. He will target so-called merchants of death but celebrate the 600 abortion clinics across America. This regime will encourage riots, defund the police and try to take away American’s right to self-defense. Madam Speaker, the American people are not on board with the Biden regime’s hypocritical gun grabbing. Instead they are buying guns at a record rate. So my colleagues from the other side, they can keep running their mouths and we will keep adding to our arsenals. Thank you gentlemen. I yield back.” – Lauren Boebert 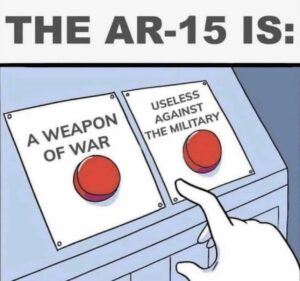