Senator Sends Threatening Email to Voter, “I know where you live” In Response to Request for Audit

Breaking today on the program, the real insurrectionists have been identified, and their currently on the run attempting to unlawfully flee to avoid arrest and prosecution. The criminally corrupt FBI has been weaponized against 80 million Americans, simply because those 80 million of us are the political enemies to progressive radicals, communists, Marxists or any other cute name or identifier you’d like to assign to the globalist tyrannical authoritarians attempting to topple our political system and genocide anyone that gets in the way of the execution of their agenda to force complete subservience to the deep state cabal.

Every system at their disposal has now been weaponized against you, and we’re now finding out the complexity of relationships between individuals, the collusion and concerted efforts from allied countries that we have now been able to clearly identify as adversaries of the United States, attackers of freedom, enemies of liberty, destroyers of justice. They’re murderous criminals, pedophiles, drug and human trafficking terrorists, and they’re not living in caves in Afghanistan, carefully placing IED’s in the desert, beheading people on internationally broadcasted internet videos in the name of Allah or aiming nuclear warheads at America from Russia. They’re right here, in the United States, disguised as elected representatives, law enforcement officials, intelligence officers, military commanders and inside of the people’s house at 1600 Pennsylvania Avenue.

If there’s one thing we have failed to do in times past it’s give credit to the enemy for their ability to plan and orchestrate, stick together, maintain a narrative, project propaganda and slowly infiltrate every aspect of your life without firing a single shot, without being detected and while acting like termites as their quiet little infestation has now become a catastrophic complication as the foundation of our structure is now compromised making it impossible for the larger structure to stand without an immediate intervention.

Your place of work has been infiltrated with woke transgender pushers, muzzling mandates in the name of health and safety and the choice to fall in line or lose your income.

Law firms are scared to take any case that stands against these tyrants, making it nearly impossible for the globalists’ victims to stand up for their civil rights.

Your kids’ schools have been overtaken by indoctrinators that are sexualizing them, brainwashing them, convincing them that they’re racist, convincing them to repent for the color of their skin, and ultimately join the force of evil to assist in eradicating their own race, if they happen to be white.

Law enforcement agencies do not protect law-abiding citizens. They protect criminals as command staffs have been politicized, become woke, sympathizers to criminal anarchists and stand down while your neighborhoods burn, innocents are targeted and intimidated, assaulted, raped, robbed and killed. The same so-called police leaders have actually turned on their own rank and file, eliminating good cops by refusing to support them and actually throwing them to the wolves in the event of any use of force situation, even the most justifiable police action, forcing a mass exodus and replacing those vacancies with like-minded insurgents akin to those that stood down while $12 billion in damage was inflicted upon major cities across the country over a period of just a couple of months. Nobody was held responsible then, and nobody is being jailed now allowing it to continue. These cities are under siege, and nobody is reporting it.

As a side note, Mayor Lori Lightfoot has weaponized race, despite the fact that she’s the most openly racist mayor on record in this country who was unashamed to deny any white reporters access to her for any interviews. Now, she’s spending tens of millions of taxpayer dollars as she has announced that racism is a public health issue. I’m sorry, but I missed the story about droves of roving gangs of white supremacists executing blacks on the streets of Chicago. But the media will not hold her accountable, and if you pay taxes in that cesspool of a city, you’re just screwed. Pay up or leave.

That’s because the media has also been infiltrated. The very people that are supposed to bring all of this to the court of public opinion and be the watchdog for you and me has abandoned us as they’re paid to do so by six corporations, all funded by the Satanist globalists that we have identified over and over again right here on this show. The media is the weaponized enemy of the people, as properly identified by President Trump.

The military is not for you, and the commanders responsible for our last line of defense are not concerned with defending the Constitution or the citizens of the United States against enemies both foreign and domestic, because instead they’re assisting in the purge of those ranks, advocating for a mandate that would force every soldier to read an Ibram X Kendi book, convincing them that the armed forces is a racist institution and should be responsible for rooting out white supremacy in America, although when asked, the author of that book can’t even define the word ‘racism’.

Your personal healthcare system has become weaponized against you as those in lab coats are acting like, in the words of Dr. Jane Ruby, Zombies as they willfully inject you and your loved ones with a substance that nobody can identify, including them. The inserts on these shots being referred to as ‘vaccines’ are left intentionally blank, and none of them care to acknowledge the unprecedented amount of documented injuries or deaths as a result of their quest to inoculate everyone on the planet.

The list goes on and on. The point is, every system you have ever once had the comfort of relying on to protect you has now been aimed in your direction with the intent to destroy you.

So, where do you turn when you expect results? We do what the Constitution has told us to do. We act according to our free political system’s structure and we reach out to those that we elected to stand up for us. That’s their job. Their only function is to stand up and be the voice for their constituents. That’s why we put them there.

But what happens when those people openly admit that not only are they not there to protect you, but that you may actually need to protect yourself against them? What if you go to them with a reasonable request, and they respond from their iPhone after midnight to inform you that they have your address, birthdate and other personal information about your family, and that they’re adding you to a ‘list’?

Cynthia Fisher is a citizen of the State of Minnesota, specifically Stearns County and this is exactly what happened to her. Cynthia joined Stew today to tell her story and show the proof. 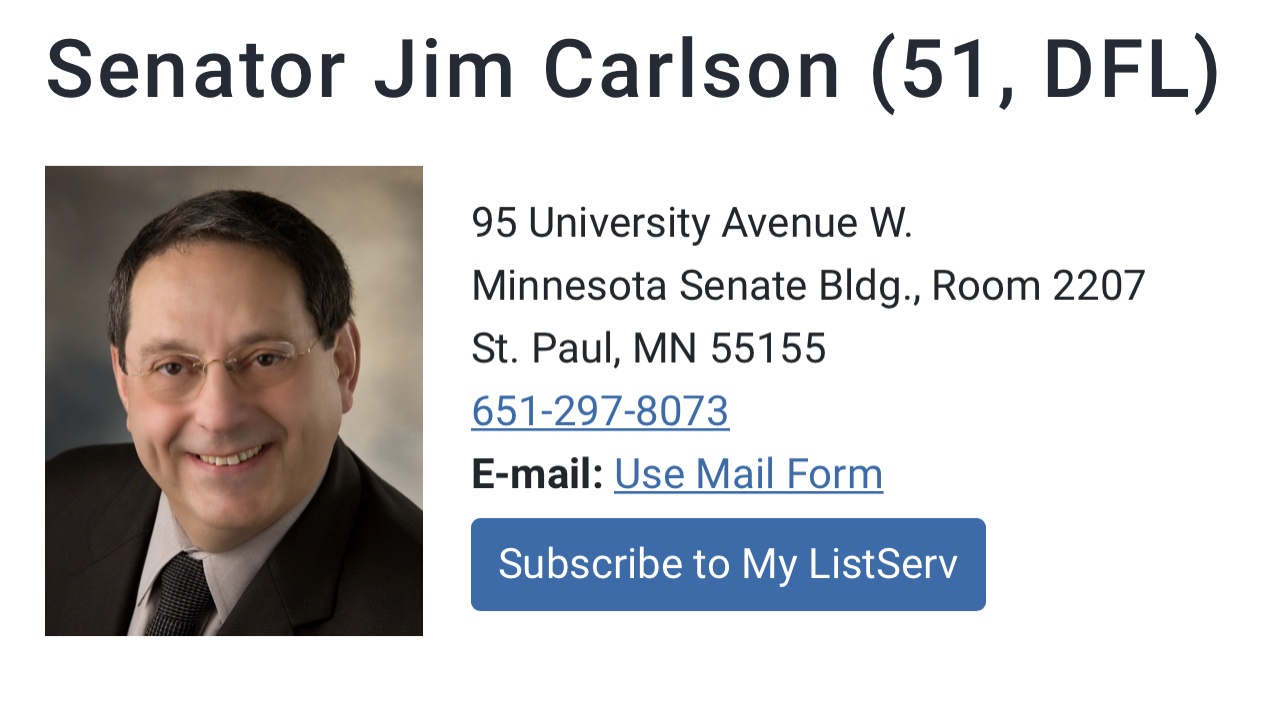 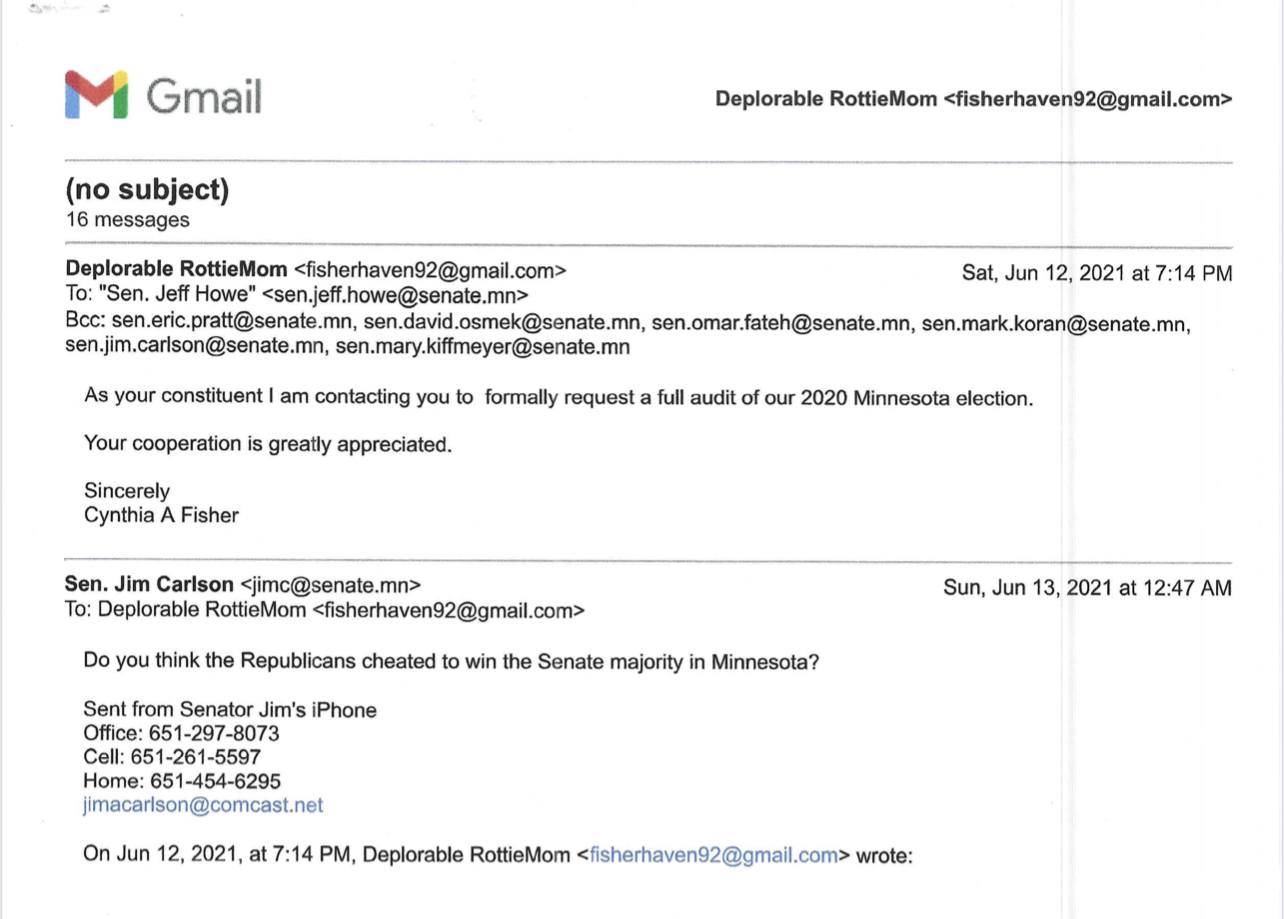 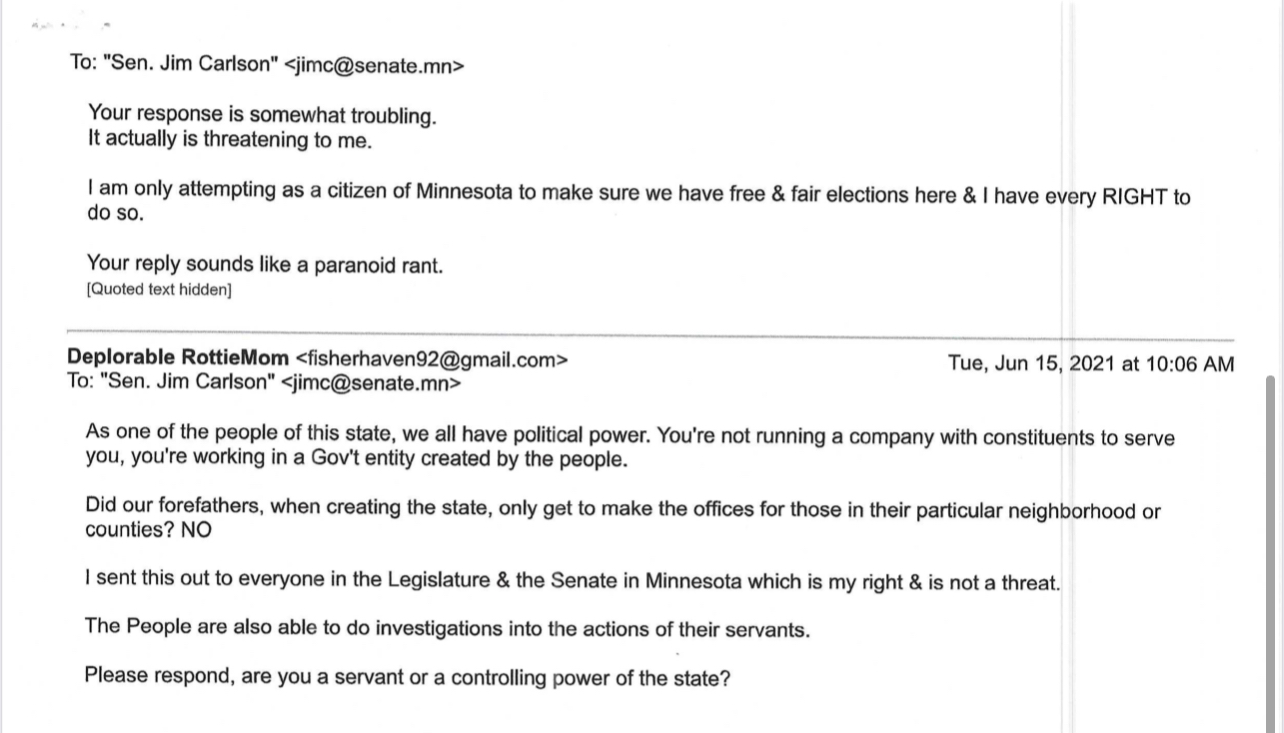 Minnesota Senator Jim Carlson seems to have forgotten that he works in a system put into place by the people, and is supposed to work for the people. If you feel the urge to remind him of his duty, you can reach the bureaucrat bully, directly at 651-454-6295 or email him at [email protected].

The Stew Peters Show can be found on Red Voice Media at StewPeters.TV