Despite what you’re seeing on the local or national news, cable outlets and on Google, airline pilots (at least with one major carrier) are absolutely being told they must be injected with these shots being called ‘vaccines’, or they’ll be grounded. I’m going to tell you why that puts you and your family in grave danger, and why you should be immediately concerned about flying, particularly with one specific airline, and the language you’re going to see in the leaked emails we have obtained is absolutely shocking, and the words came from the top.

We can all agree that since 9/11 getting on an airplane is just different. For everyone. It isn’t like the past, we all think about terrorists in the back of our mind, hijackings, bombs, out-of-control passengers, I mean the list goes on. There isn’t an American alive that doesn’t know about that day, and even if you aren’t old enough to remember that day, personally, there are constant reminders at every turn when you’re using major carriers to travel the friendly skies. Where you park, cement barricades outside of terminals, what you’re allowed to check in your baggage, limiting the amount of fluids, don’t you dare bring your shampoo, when you’re traveling for more than a couple of days it’s likely you’ll have to shop your destination city because of the strict limitations on size, capacity and quantity when it comes to so-called security protocol. The various screening techniques, x-rays, new-fangled quick scans that check your skin for explosives and pat downs that borderline sexual assault, I mean the reminders are constant. Air travel is risky, and those in charge of securing the safety of travelers don’t hold back on letting you know about it.

Added to all of the obvious risks is your personal health. Now, until recent times, it wasn’t widely known, or at least common knowledge among travelers, that you’re at a significantly higher risk of throwing a blood clot when you’re airborne. Probably not something you previously considered, and why would you, but recent headlines have opened the eyes of many air travelers, and at the center of the reason for the increased awareness to an extremely deadly scenario is the infamous COVID injections being called vaccines.

There have been reports of pilots from MULTIPLE airline carriers dying from blood clots, and we reported on a pilot that was removed from Canadian cargo plane after he was rendered unconscious. The common denominator in all of these events was that the victims had recently been injected with these shots being referred to as ‘vaccines’.

At first glance, the airline pilots association, along with specific carriers, like United Airlines as well as the so-called ‘media’ make it appear as though there is no mandate for pilots. It’s reported that the jab is strictly voluntary, and that no disciplinary or punitive action will be taken against pilots that exercise their medical freedom and decide against the inoculation, for whatever reason. Their reasons are none of our business, because one’s medical history, conditions, diagnosis, and treatments are meant to be kept confidential. It’s not your employer’s business, not your neighbor, your child’s teacher, your pastor, the lady handing you your movie theatre ticket, It’s none of anyone’s business. Period.

After a small amount of digging, the Stew Peters Show has uncovered the truth. What’s being broadcast publicly is not the truth, and the truth is being hidden from you to protect the bottom line for airline companies at the bottom of the food chain, and all the way up to corporate executives, the hedge funds that financially back the carriers, and those that manage and invest in those hedge funds. The point is, your life can be sacrificed and it really means absolutely nothing to these people, so long as the big bucks continue to flow, without interruption.

United Airlines and the Air Line Pilots Association have openly released a monetary ‘bonus’ for those that decide in favor of the jab, offering 13.5 hours of flight pay bonus, which ends up being anywhere between $2,500 and $4,800 depending on what seat the pilot occupies, and the level of their seniority.

What United Airlines does NOT want you to know, is that a letter of agreement between United Air Lines, Inc. and pilots represented by the airline pilots association international paints a completely different picture than what they’ve represented to the media and to the public. The truth is United Airlines is going to give pilots the choice: get jabbed, or be grounded, essentially giving pilots an ultimatum to get ‘vaccinated’ or lose their income. This is incredibly dangerous for the pilots, and both United Air Lines and the Air Line Pilots Association have demonstrated that they don’t care, but what’s more alarming is the risk they’re passing on to YOU, and ignoring the risk to what TSA checkpoint travel numbers indicate are millions per day.

According to the letter of agreement, If a restricted city appears in an Unvaxed pilot’s monthly schedule, there are serious consequences. That pilot is removed from that trip, WITHOUT pay. Those days then become blocked, so the pilot is unable to pick up flights to an unrestricted city, and unable to make up for that loss of pay, and if that pilot wants to struggle to find trips to pick up in order to pay his or her bills, they must pick up trips that land on their days off. Senior unvaxed pilots ‘might’ be able to avoid restricted cities, but junior unvaxed pilots could receive a schedule with multiple restricted cities in it, meaning they would be sitting on the bench, riding the pine, at home on the couch with no available trips and no pay. Junior pilots get the last selection of the open trips, which they would require to take on their days off, and that’s because senior pilots are entitled to ‘first dibs’ on these particular flights, meaning there is an extremely high probability that since junior pilots will not have available trips to pick up, there’s an excellent chance junior unvaxed pilots will not be in a position to make up any loss of pay.

As I read on, the LOA indicates a small provision where if a trip becomes a ‘vaccine destination’ after the monthly schedule is released and inside two weeks before the trip segment, the unvaxed pilot will be removed from the trip, but pay protected and placed on standby for those days. To be clear, this is still medical harassment but to a lesser degree. It’s a lot to understand, and I’ll post that entire LOA at StewPeters.tv, but essentially all you need to know is that the policy is designed to force out ‘non-compliant’ senior pilots, and force junior pilots into the inoculation, or give up everything they’ve worked for. 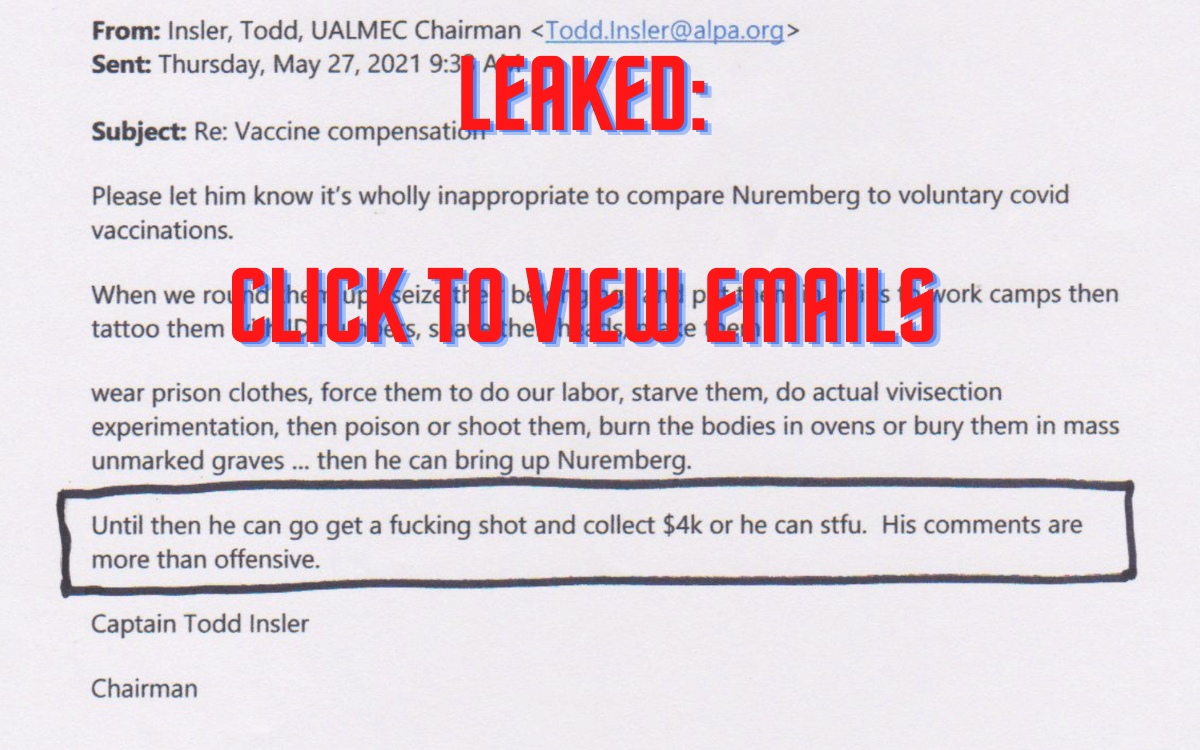 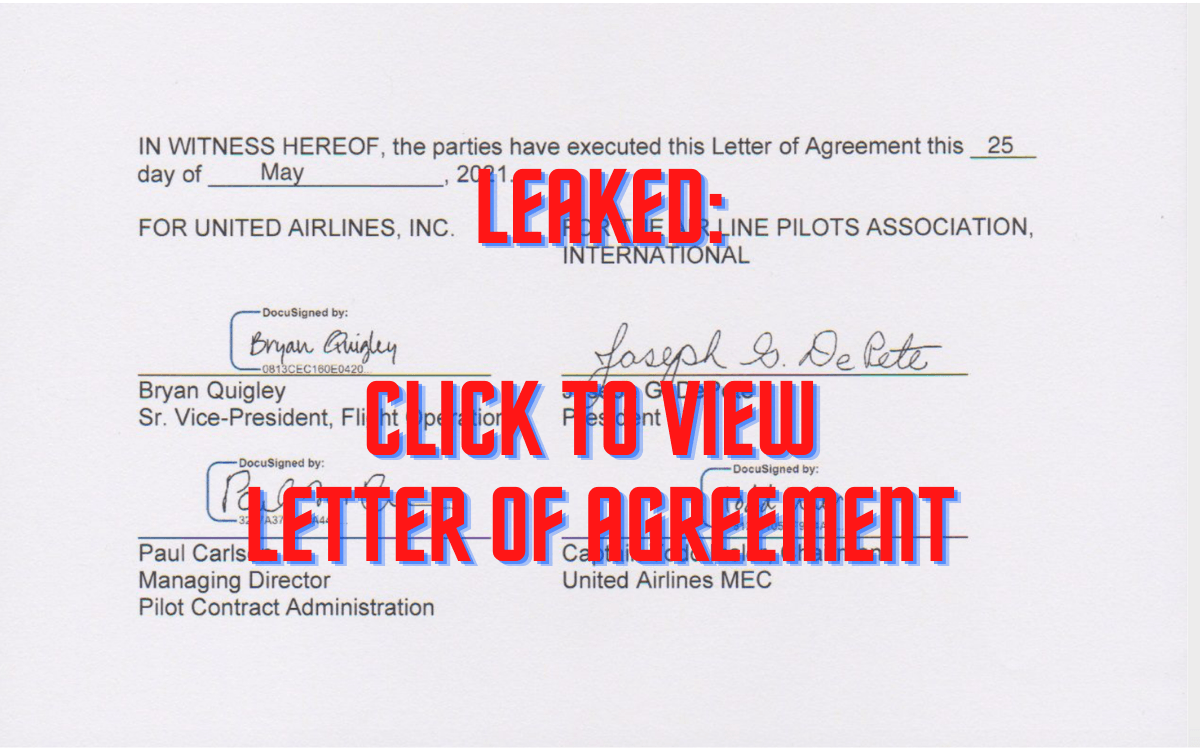 The Stew Peters Show can be found on Red Voice Media at StewPeters.TV. Follow Stew on Gab