A Florida preschooler who has been battling cancer had his dreams come true when he got to be an honorary deputy for a day. Carlton Palmore Elementary School faculty along with the Polk County Sheriff’s Office worked together so Merrick Lloyd could enjoy his special day as a Polk County Honorary Deputy. 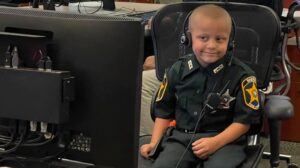 “The world needs hope and goodness right now. We are so thankful that Merrick was able to get his wish and become a deputy for a day. Merrick is one brave preschooler!” – Carlton Palmore Elementary School Principal Badonna Dardis

Merrick Lloyd has been battling cancer and undergoing chemotherapy and radiation treatments for about six months. Lloyd was ecstatic to be able to be a deputy for the day. The department went out of their way to make him feel special.

Throughout the day he got to meet various staff members of the sheriff’s officer, sit in the cockpits of a helicopter and plane, listen in on dispatch calls and was showered with gifts.  He was even given a uniform to wear and an honorary plaque. 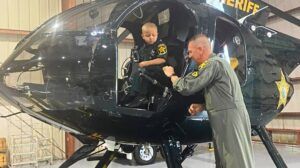 “He was excited to meet Sheriff Grady Judd, the 911 Dispatchers, and the Polk County SWAT Team! Thank you for your generosity and making one of our student’s dreams come true! You are the BEST,” – Principal Badonna Dardis

This piece was written by Zach Heilman on July 20, 2021. It originally appeared in ThinBlueLineTV.com and is used by permission.