Mike Daugherty, an Atlanta resident originally filed the suit contesting the certifications of Jon Ossoff and Raphael Warnock as the winners of the election. He is seeking a new election conducted on paper ballots under Georgia code 21-2-334. 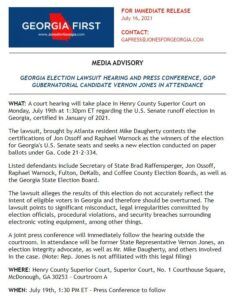 Multiple defendants are listed in the lawsuit including Secretary of State Brad Raffensperger, Jon Ossoff, Raphael Warnock, Fulton, DeKalb, and Coffee County Election Boards, and the Georgia State Election Board.

The lawsuit states the election should be overturned because it does not accurately reflect the intent of the eligible voters in Georgia. The lawsuit outlines numerous violations including legal irregularities committed by election officials, procedural violations, security breaches involving voting equipment, and significant misconduct.

After the hearing there will be several officials giving a press conference including Mike Daugherty, former State Representative Vernon Jones, and an election integrity advocate.