Gwen Berry Just Got Hit With a Truckload of Karma….Boy, That Was Fast…

The anti-American Olympian Gwen Berry, who turned her back on the National Anthem, is facing down a big ol’ cloud of KARMA that’s raining down all over her Marxist parade.

The woman who is so “progressive” and so “woke” just felt the kiss of death on her career as her violent, insensitive, racist, and vulgar past-tweets come back to haunt her.

The National Pulse found the tweets and did a report on them: Berry, whose participation in the U.S. Olympic trials for hammer throwing led to a viral photo of her turning her back to the flag, has also used her platform to advocate for left-wing causes including racial and social justice.

“Berry has become one of the most outspoken leaders in the sport fighting to bring awareness to issues of social injustice in the United States,” her personal bio boasts.

The National Pulse can now reveal several posts from Berry’s Twitter account containing racist comments against at odds with the issues she purports to combat.

“This lil white boy being bad as hell!! I would smack his ass then stomp him!! Smh #whitepplKids hella disrespectful,” she tweeted in 2011. Berry has also asserted that “white ppl” run their “damn mouths too much” and are “sooo retarded when they are drunk” among other unkind generalizations about the race:

Here are the tweets: 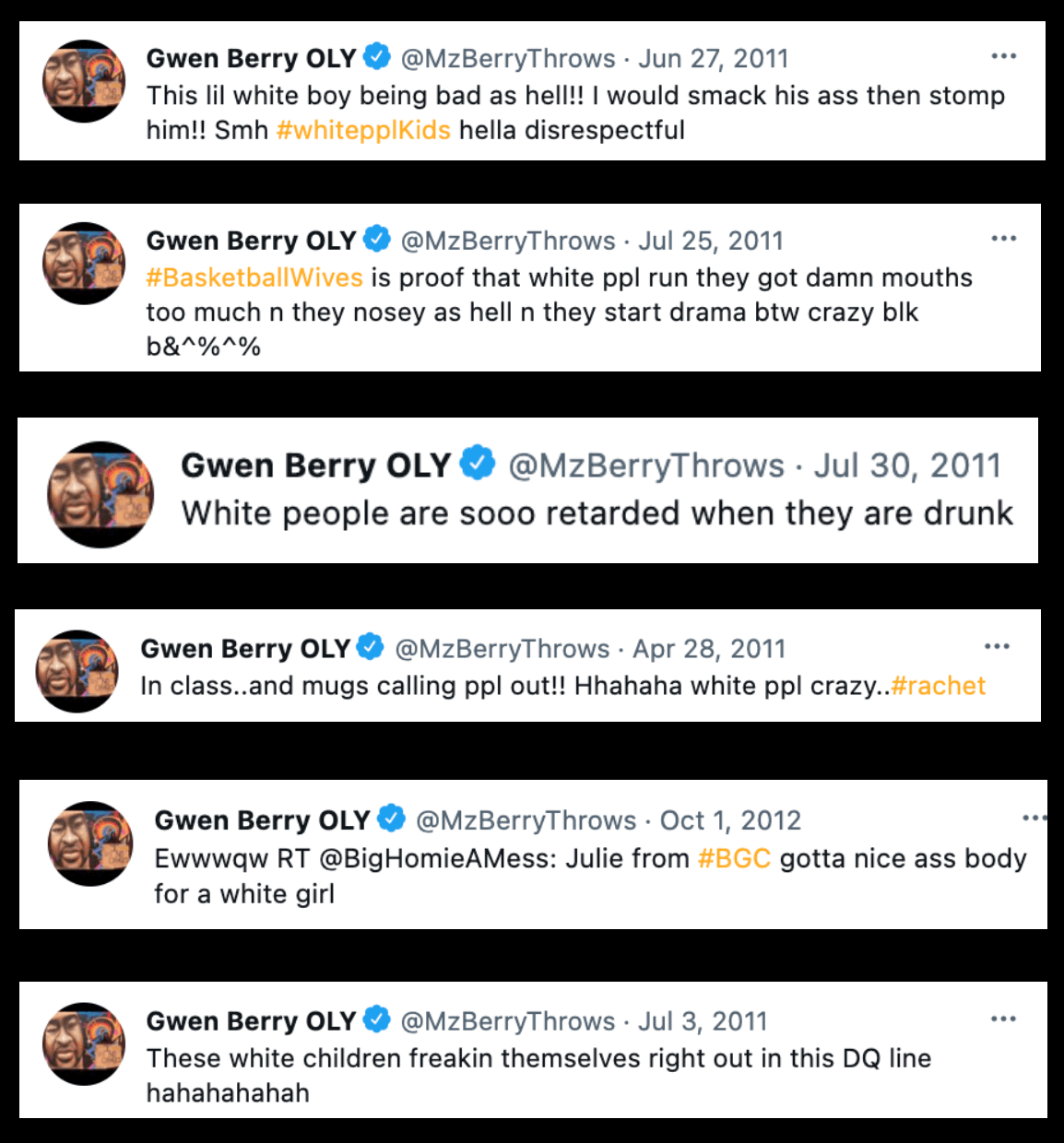 Maybe Gwen should worry less about the anthem and focus on the many people she’s been oppressing with her hate, violence, and racism?

Read more at WayneDupree.com:
Obama So Deeply Panicked, He’s Now Going on CNN Admitting He’s Worried About “2020 Election”
[VIDEO] Steve Bannon Just Revealed Something Very Interesting About Biden’s Poll Numbers…
Looks Like The Walls Are Actually “Closing in” On The Clintons Thanks to a Stunning New Court Ruling

[VIDEO] Brits Come to Blows Over Gas Shortages, After Unvax Truckers Walk Off the Job and Create Nationwide Shortage

[VIDEO] The F Joe Biden Chant Broke Out at Ryder Cup, Of All Places