Karma’s Not Done Quite Yet: Chrissy Teigen Just Stepped In it AGAIN…

I've never seen Karma have such a "field day" with one person in such a short span of time...

I will tell you what – I am convinced that Chrissy Teigen has a legit “personality disorder.”

It’s the only reason I can think of that she just can’t stop making things worse for herself.

The former supermodel is now online whining and complaining that she’s part of the “Cancel Club.”

Mind you, this is the woman who has urged several people to go and “kill themselves,” and who used her platform to destroy people’s lives and “cancel” everything they had worked for.

But you’re supposed to feel sorry for Chrissy because now she doesn’t get all the attention she used to form social media.

Once again, she’s “depressed” and she’s the “real victim” in all of this.

And how do we know this to be true?

Well, she posed a picture of her 7,000 dollars ripped-up jeans, while she lays on her 55,000 dollar couch after she just got back from a fancy two-week vacation in Italy.

Don’t you feel sorry for her?

Very depressed Chrissy Teigen wants to let us all know how depressed she is b/c she’s a hateful twat & now she can’t have fun being a twat on social media anymore. She also said she needs time off her couch even though she was just in Italy with family and friends for 2 weeks. 🤡 pic.twitter.com/q2y6xRBC9T 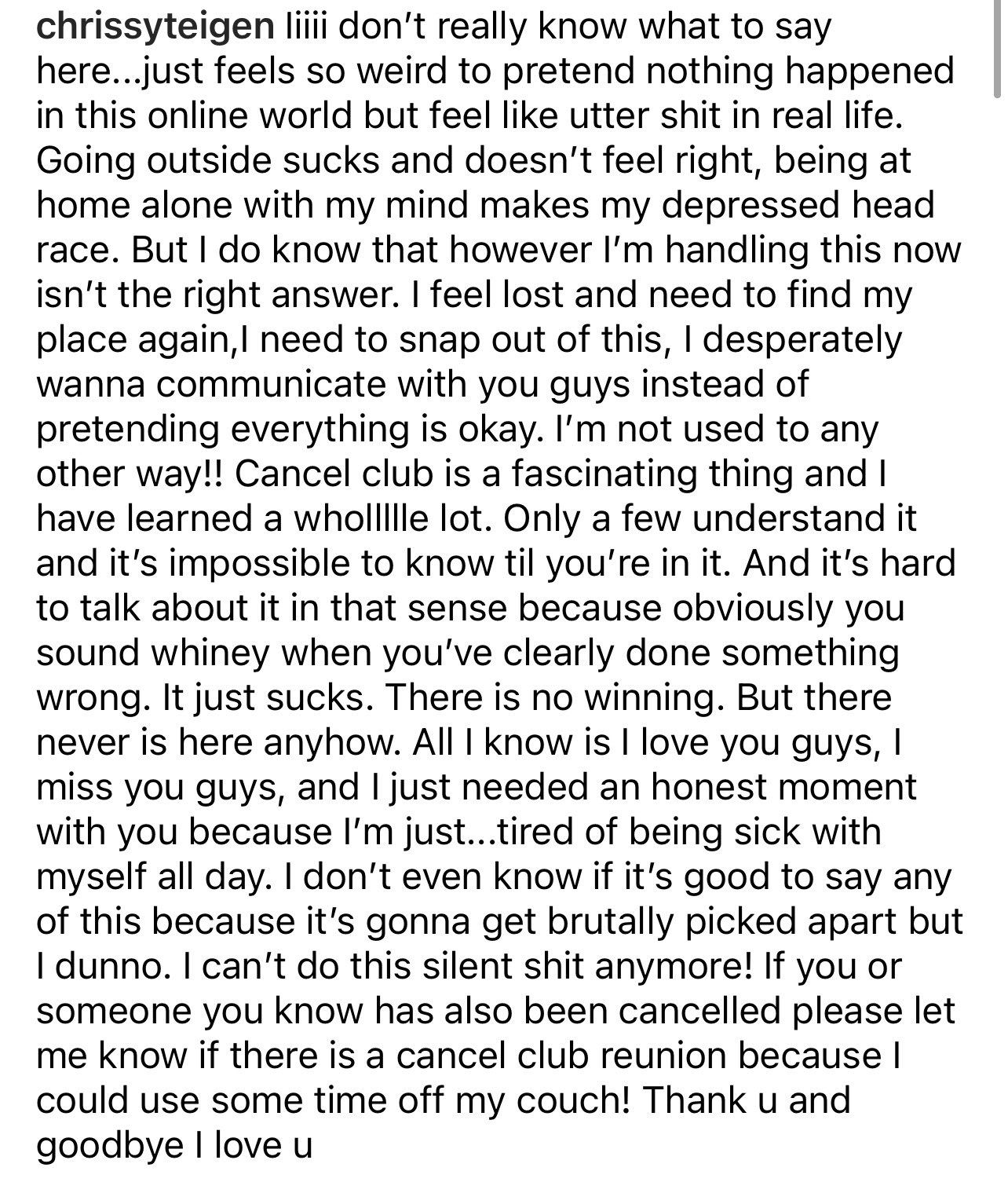 Trust me, this little “I’m the victim” selfish rich-girl rant did not go over well with her former fans:

“Cubans are being slaughtered by their government in the streets but did you know that Chrissy Teigen is sad because nobody is paying attention to her on Instagram anymore?”

“Chrissy Teigen has access to tons of shit, can travel anywhere in the world, rich ass friends, kids, a rich 4’8 hubby & yet she’s having a meltdown cause internet strangers aren’t kissing her ass 24/7.”

“How can Christy Teigen be that desperate for social media attention to the point of depression. Give me Chrissy Teigen‘s money. Y’all would NEVER see me again.“

“Chrissy Teigen has over 13 million followers on twitter and she’s penning letters about how sad she is to be canceled. The madness has to stop.”

“Chrissy Teigen is not a victim. The people on twitter she randomly, inexplicably, maliciously bullied were the victims.”

“Not just Chrissy Teigen, all these celebrities are weird! Y’all have millions of followers, ppl kissing the ground that you walk on but that’s not enough. Everyone has to love you, think you are the most beautiful , one was crying cos a random person called her ugly”

“The ONLY reason Chrissy Teigen is depressed she’s in a “Cancel club” is because she’s not making money. Girl, bye. She’s acting depressed with a pic of herself on a couch as if she just wasn’t in Italy last week”

“What do Chrissy Teigen and Jan. 6 have in common? Despite endless promoting, they’ll never be a thing.”

“Chrissy Teigen has a whole family, so funny that she needs to be here”

“chrissy teigen you don’t have to play hop scotch with dropped power lines in a thunderstorm you can just sip tea in your mansion, watch the rain tickle the infinity pool and try in vain to spend all your money”

As a former PR pro, my best advice to Chrissy is to literally deactivate all her social media accounts for one year.

Spend that time volunteering at suicide prevention and online bullying groups, and donate money to these causes, and get herself into therapy.

And at the end of the year, with a truly humble heart, pen an op-ed apology to every one of her victims, and talk only about how she hurt them (not how it hurt her or made her feel) and what she’s learned about suicide and social media bullying and how she’s going to turn what she did into a positive by helping others.

Then, she can do a “comeback” tour, not as “Chrissy” but as a reformed bully and newly heartfelt advocate for victims who’ve been bullied and harassed online.

That’s what she should do, but I don’t think she will.

Trump Trashes Biden Vaccine Mandates, Says Fauci Is Part Of The Furniture Of The Establishment [VIDEO]

Older Afghan Men Relocated To US With Child Brides

[VIDEO] Brits Come to Blows Over Gas Shortages, After Unvax Truckers Walk Off the Job and Create Nationwide Shortage