They probably don't want you to know this stuff...

Dr. Walensky finally dishes out the truth about the vaccine.

Apparently reports are showing that those who were vaccinated early are actually at increased risk of severe disease and now they are pushing for everyone to get the jab.

Here’s the screenshot from the very beginning of the video… 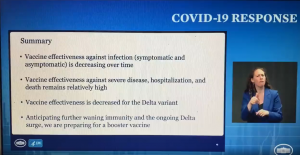 “Additionally reports from our international colleagues including Israel suggest increase risk of severe disease amongst those vaccinated early.”

Here’s what people from the online community have to say:

“So just for the record: I just tested positive and have what I would call typical cold symptoms despite being double Pfizer’d. It seems to me that the vaccines are bullshit and that this whole thing will be over when the virus is done with us.”

“This is because the vaccine was not tested fully, pushed out too quickly for a disease that 99% of people would naturally combat it. Now they stripped the immune response with fake immunity and it is going to get worse!”

“the reality is that the truth is going to come out. The goal is population reduction, how can you hide that? it’s just interesting that they picked Israel.”

“Because rather than admit that mass vaccination was a horrible idea they would rather triple down on their insanity until the house of cards collapses. It’s the equivalent of a pharmaceutical pyramid scheme.”