You recall when this Afghanistan nightmare first started and the Biden admin put out that bizarre photo of him, supposedly at Camp David, sitting all alone at a table in the “situation room” looking like the saddest and most lost old man on the planet, right?

It was the first of MANY bad PR moves by this clumsy and inept administration, and what made matters worse than just the optics of a feeble old man sitting alone, was that many people questioned the authenticity of that photo because the clocks on the wall were wrong.

Yahoo News reported on the dicey situation in the “situation room” by asking, why were the clocks wrong in the room?

A photo of President Joe Biden’s situation room showed the wrong times for London and Moscow, setting off a flurry of online theories.

The White House released a photo of Mr. Biden meeting virtually with his top national security advisers to discuss the deteriorating situation in Afghanistan.

The time difference between the cities has been three hours since the United Kingdom put its clocks forward in March.

Boris Epshteyn, a former adviser to Donald Trump’s 2020 election campaign, was among the first to notice the faulty time difference.

“Real question. Why is Moscow time wrong in this photo? Time difference between London and Moscow is only 2 hours, it hasn’t been 3 hours since March,” Mr Ephsteyn wrote on Twitter.

Twitter users quickly weighed in with conspiracy theories about whether the photo was staged, or if the photo was taken before March in order to maintain security.

The White House ended up issuing a statement that claimed they “forgot” to switch the clocks or something totally goofy and inept like that.

But now something else has come up about that photo…

People are now wondering why, on August 16th Joe Biden looks to have a pretty decent – albeit wispy head of a hair – but just over a week later, after his disastrous Afghanistan presser, he has a head full of peach fuzz and is almost completely bald in the back.

Did Joe Biden suddenly lose all of his wispy gray hair? He’s not nearly as bald in this Camp David pic supposedly from last week during his vacation as he is a couple days ago 🤔 pic.twitter.com/l7zVs1K4OE

Here’s a closer look at the photos: 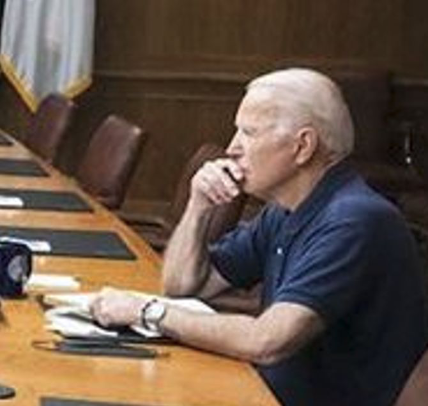 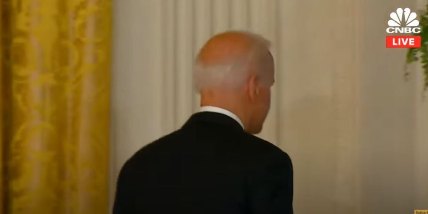 That’s quite a difference in just over a week, right?

And in the “Camp David” pic it certainly doesn’t look like he’s wearing some thick lush synthetic toupee or anything like that.

It looks like his natural, cruddy thinning hair, but there appears to be a HELLUVA lot more of it in the first photo.

Is the stress so bad for Joe that all of his hair fell out, and peach-fuzz grew back like “Chia seeds” on his head in record time, or is something else afoot?

MORE NEWS: Gab Vs. GETTR, Andrew Torba Vs. Jason Miller – A Side By Side Comparison On Tim Pool’s TimcastIRL [VIDEO]

Here’s what people online had to say:

“I think they have a double they roll out whenever JB isn’t lucid. Seen pics of him with brown eyes and blue eyes, different hairlines, and different gait.”

“Where did the fuzz go?”

While a lot of people think Joe has a “double,” I disagree.

If I had to propose a theory, I’d say this: when the Afghanistan situation broke out, Joe was sleeping or completely out of it, so his Handlers found an older photo of him sitting at the table, photoshopped Kamala and CIA in on the TVs (forgot to change the time) and passed it off as recent.

What do you think is going on?

Read more at WayneDupree.com:
[VIDEO] Just Hours After 13 US Service Members Were Killed, WH Was Struck By a Bolt of Lightening
[VIDEO] Trump Supporter Just Took Bill and Hillary’s Beach Picture and Made it Great Again LOL
OANN’s WH Source Describes Confused and “Paralyzed” Biden, As Reports On Kabul Bombing Came Rushing in

Finally, we come to the ultimate irony: an impostor impersonating an impostor. Where’s the real Joe Biden? Is he even alive? Who knows?

clones and look alikes and actors playing biden.
Early Biden has an attached earlobe, while biden actor clone has attached earlobe
who is the actor playing biden? clones and look alikes in government have been used for a very long time.
All the footage we see of the fake president that’s supposedly taken at the White House appears to be shot somewhere else.

There are shots of Joe supposedly sitting at the White House desk with elevated stage lights reflected in the windows, and other shots with a garbage truck visible outside the window.

Since when do garbage trucks hang out behind the White House?

White hat actor playing his part. That is not Joe Biden.

Check out his elbow on the table…..doesn’t line up with his forearm!!

NO KING BUT JESUS: Historian Bill Federer Explains Why Monarchy Would Kill USA

Gab Vs. GETTR, Andrew Torba Vs. Jason Miller – A Side By Side Comparison On Tim Pool’s TimcastIRL [VIDEO]

Whistleblower: Hospitals Killing For Organs, “This is Absolutely Evil And A Crime Against Humanity!”