Vaccine Mandate Protest In OK, 100’s Of ‘Potential Terror Threats’ Show Up And Then This Happens

Do these people look like 'potential terror threats'? Biden Admin thinks so

Hundred’s, if not thousand’s showed up and sang the National Anthem at the Oklahoma Freedom Rally against a COVID vaccine mandates and against being forced to wear a mask.

These are American’s using their First Amendment rights to voice their opinions on the vaccine and mask mandates.

The Biden Administration is labeling them as potential terror threats because they don’t want to be forced to take experimental drugs or wear diapers on their faces.

MORE NEWS: BLM: Where Are Its Leaders And What Happened To Millions Of Fundraised Dollars? 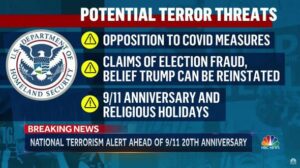 “Hundreds of people gathered at the state Capitol on Saturday for what they called the Oklahoma Freedom Rally, with many protesting against mandates on the COVID-19 vaccine and masks.

While hundreds of people made it inside the Capitol rotunda for the rally, hundreds more were still outside as of 5 p.m., waiting to get in. Some even held their own mini-rallies.

People inside the Capitol sang “America the Beautiful,” chanted “USA!” and recited the pledge of allegiance. Many held American flags and signs that said “no vaccine mandate,” “protect our freedom” and “mandate medical freedom.”

Peacefully singing the National Anthem = Terror Threat according to the Biden Administration?

Chanting USA! USA! = Terror Threat according to the Biden Administration?

Hello from the Oklahoma state Capitol where hundreds, if not more than a thousand, folks are protesting COVID vaccine mandates. Organizers say roughly, 1,500 people are still waiting to get inside

We The People are fed up and have had enough…

“DONT TREAD ON ME! the vaccine mandates, mask mandates, and tyrannical demonRAT dictators on a power trip, while funneling foreign funds!”

“Okies don’t put up with crap, some of my kin are from there, they are tough resilient people”

“When i see this, it makes me think this mandate push is really because their numbers are a lie, that the real number for the shotz is more like 25-30%. So this is why so many threats and coercions to live normal free American lives is happening so quickly.”

“Yes go Oklahoma! Other states do the same!”

“That’s Oklahoma, folks. This will not end well for the tyrants in the Blue states either. Americans have had enough. Don’t Tread on Me… not just a slogan anymore.”

“This ends when we say it ends! Fight for your freedom and let’s take our country back!”

BLM: Where Are Its Leaders And What Happened To Millions Of Fundraised Dollars?