You've seen a lot of BS news stories, but this one from Rolling Stone the KING KONG of "fake news"

It’s curious how every time a therapeutic is hailed as a possible “treatment” for COVID, the mainstream media and Democrats come out like mouth-frothing wild animals to attack it.

It almost feels like they’re an army of organized “bots” working to protect Big Pharma’s vaccine.

Because that “bot army” is writing and posting a slew of fake articles and fake narratives in order to scare the crap out of people if they even THINK of “treating” COVID versus taking the vaccine.

It all looks and feels a little suspicious and again, is yet another reason why there’s so much controversy and mistrust when it comes to this vaccine.

It’s definitely a “thou dost protest too much” vibe going on the way left-wing media comes out like banshees against any medicine suggested to “treat” COVID.

I guess for them it’s “Vaccine or Bust.”

And right now, their focus is on Ivermectin – an anti-parasitic drug whose inventor actually won a Nobel Prize in 2015.

This drug, like many other drugs humans take, is also used by vets – there’s an “animal” version and a “human” version – but the media is just focusing on the “animal” version in order to create this crazy “horse dewormer” narrative.

They’re claiming that people are ingesting a “horse dewormer” to “treat” COVID.

MORE NEWS: Are We Supplicants Or Americans?

It’s the same exact game-plan they did with the “fish tank cleaner” hysteria after President Trump suggested that Chloroquine could be used to treat COVID.

Ivermectin is actually an anti-parasitic drug that is used in humans all the time. As a matter of fact, many Afghan refugees are being given the drug as we speak for parasites.

Reuters reported that refugees are given Ivermectin for infections unrelated to the novel coronavirus.

But the left keeps talking about it as if it’s ONLY used as a horse dewormer and they’re creating this widespread fear over the medication, which is absurd, yet, predictable.

And the fake news that’s being pumped out on this medication is so over the top, it’s almost mind blowing.

Rolling Stone Magazine just published one of the most shameless fake news pieces we’ve seen yet…and it’s amazing, that even though their entire story has been completely and totally debunked top to bottom, the fact-checkers haven’t yet descended upon them.

The Rolling Stone piece claimed that a certain hospital in Oklahoma was so overwhelmed with people who had overdosed on the “horse dewormer” that gunshot victims couldn’t get in to see the ER doctors.

What? LOL, this sounds patently absurd just on the surface, imagine how goofy it gets when you delve in even deeper…

Well, for starters, let me show you the image Rolling Stone used for the piece. 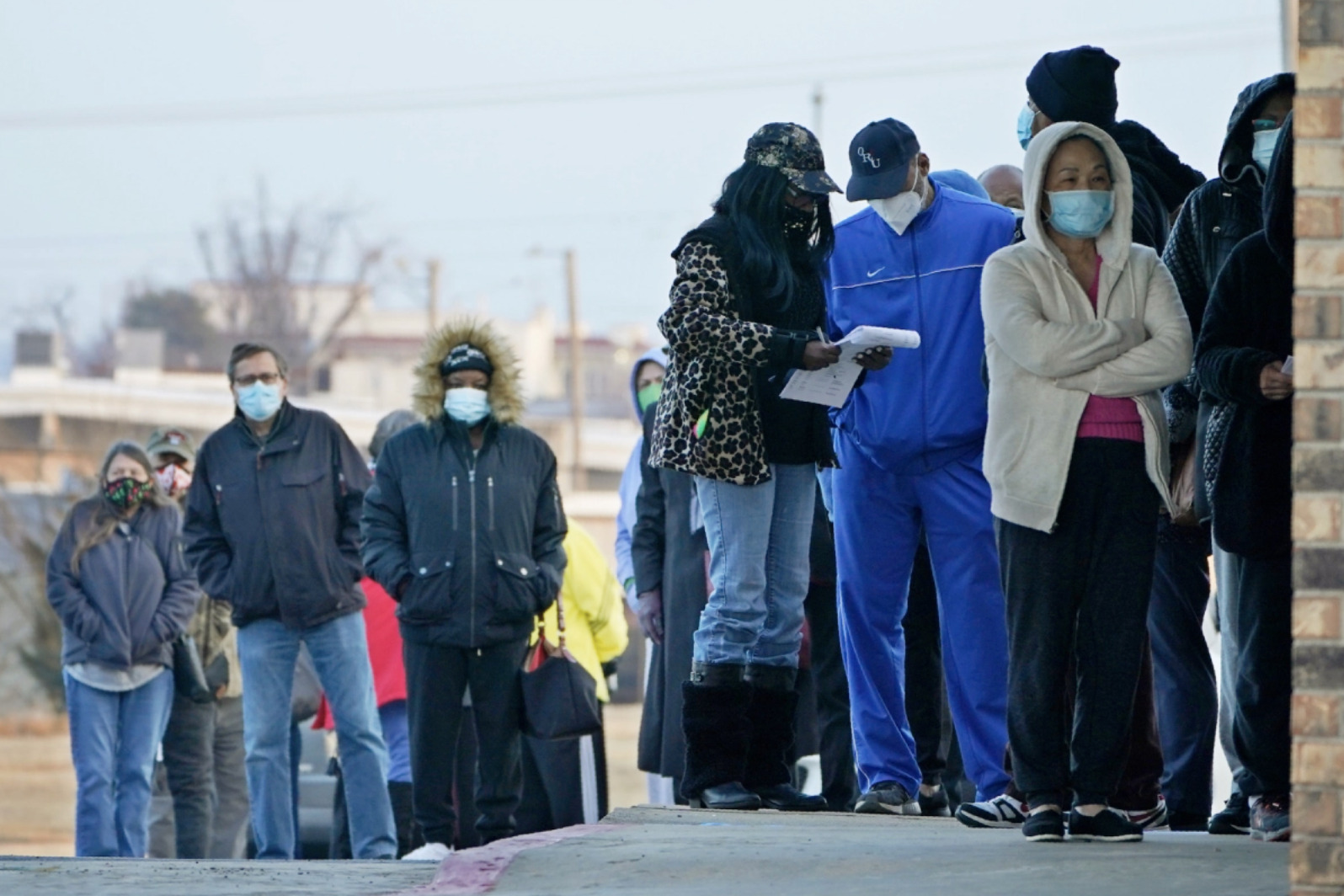 There are a few things wrong with this image. The first being that it’s September in Oklahoma and not a lot of people are bundled up in coats and hats when it’s 80+ degrees outside.

Also, most people seeking help at the ER, don’t form a line outside. They usually sit down inside the waiting room.

And finally, most “gunshot” victims don’t drive themselves to the ER and stand around waiting to get treated in their cute boots and legwarmers.

The photo that was used is a bad attempt at propaganda. It’s actually been updated in the piece to advise that it’s actually an AP photo of people waiting in line to get a COVID vax at an Oaklahoma church in January 2021.

The next problem with the article is everything that they claimed is untrue.

Without getting too deep into this piece of garbage reporting, Rolling Stone is claiming that a doctor by the name of Jason McElyea who works at NHS Sequoyah hospital reported that the rise in people using Ivermectin, an anti-parasitic drug usually reserved for deworming horses or livestock, as a treatment or preventative for Covid-19 has emergency rooms “so backed up that gunshot victims were having hard times getting” access to health facilities.

Here’s a so-called quote from the good doctor:

“The ERs are so backed up that gunshot victims were having hard times getting to facilities where they can get definitive care and be treated,” Dr. Jason McElyea said

The problem with that? Well, according to the hospital, that’s not true. They’re not treating anyone for taking Ivermectin, there are no “long wait times” at their ERs, and the doctor Rolling Stone quoted, hasn’t worked for the hospital in 2 months.

UPDATE: Northeastern Hospital System Sequoyah issued a statement: Although Dr. Jason McElyea is not an employee of NHS Sequoyah, he is affiliated with a medical staffing group that provides coverage for our emergency room. With that said, Dr. McElyea has not worked at our Sallisaw location in over 2 months. NHS Sequoyah has not treated any patients due to complications related to taking Ivermectin. This includes not treating any patients for ivermectin overdose. All patients who have visited our emergency room have received medical attention as appropriate. Our hospital has not had to turn away any patients seeking emergency care. We want to reassure our community that our staff is working hard to provide quality healthcare to all patients. We appreciate the opportunity to clarify this issue and as always, we value our community’s support.”

So, in short, Rolling Stone’s entire piece is garbage… the biggest fake news on the planet.

And boy, did they get hammered for it.

Here’s what people said about the fake news story:

“Winter coats show just how accurate this story is in September.”

“Turns out this article is completely false. @RollingStone is lying. The hospital in question put out a statement denying any of this is happening”

“Are you guys going to admit this story is complete bullshit now, or wait a few days?”

“We’re always wearing fall/winter clothing here in Okie land when it’s almost 100°F outside. Of all the pictures they could have used they use this…”

“This is awful and should be an Onion headline, not real life.”

“Surprisingly, there are no numbers given in the article, and veterinary preparations are being conflated with human prescription preparations. I see Rolling Stone is still holding to the same high standards of journalistic practices that we saw in the UVA story.”

“Well it certainly doesn’t help when MSM misleads people into thinking THAT is what Joe Rogan took rather than the human pill under the supervision of a doctor.”

“Shocking to see the amount of fake news being spread in MSM. Even the Hospital had to issue a statement to deny it. “

“That’s a whole lot of gunshot victims. Crazy how they line up like that. ”

“A hospital would not let gunshot victims waiting in the first place.”

“Oh yeah, I’m sure horse dewormed overdoses are the big reason hospitals are backed up. How gullible do you think people are? I guess very. Also the whole horse dewormer thing is a little tired now that most people who can read know it’s on the WHOs List of Essential (people) Meds”

Well, thanks to COVID and left-wing communists, the “medical industry” has also been officially “weaponized” as a political tool.

And I can’t think of anything scarier, can you?

Read more at WayneDupree.com:
Actress Rose McGowan Just Told Hillary Clinton She Was “With” Her Husband in a Hotel Room in Shocking Tweet
Jim Jordan Just Connected Adam Schiff to Afghanistan Debacle and Sent Him a Warning About What’s To Come
Babbit’s Legal Team Says They Have “Evidence” Showing Michael Byrd “Ambushed Ashli Without Warning”

LISTEN TO ME!
The JAB has NOTHING to do with a virus!
Let’s stop discussing the health angle.
It is just the LIE used to get you to accept the POPULATION CONTROL JAB!
If you’ve researched, you know this chemical cocktail KILLED all the animal test subjects!
THAT was the FEATURE the Globalists were looking for!
You’re a doomed fool IF you comply with the Master’s demands!

1 hour ago
Premium Plus

Are We Supplicants Or Americans?

Dr. Peter McCullough: Ivermectin, Early Treatment & What To Do If Your Doctor Refuses [VIDEOS]