Twitter announced a new policy banning the sharing of pictures or videos of individuals without their consent just one day after Parag Agrawal was named CEO. They have expanded their private information policy to include private media. However, it should come as no surprise once Agrawal became CEO that these changes were implemented. Agrawal has claimed in the past that Twitter should not focus on free speech. He has also been known to like tweets that focus on the radical left-wing agenda. 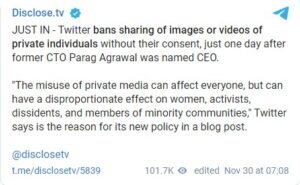 “There are growing concerns about the misuse of media and information that is not available elsewhere online as a tool to harass, intimidate, and reveal the identities of individuals. Sharing personal media, such as images or videos, can potentially violate a person’s privacy and may lead to emotional or physical harm.” – Twitter Safety.

Many people had concerns that the new policy would shut down voices from conservative media outlets that perform investigative journalism. The policy could also prevent individuals from sharing footage from violent BLM or Antifa protests.

"This policy is not applicable to media featuring public figures or individuals when media and accompanying Tweet text are shared in the public interest or add value to public discourse."

Guess who gets to decide whether or not it is in the public interest?

The following behaviors are also not permitted:

if people would drop the social media accounts maybe they would have more time see the evil rising around them. just a thought.