The first of many to come?

MUMBAI, INDIA – According to The Indian Bar Association, a criminal lawsuit has been filed in the High Court of Bombay against Bill Gates, his partner Adar Poonawalla, and several government officials in the death of a 23-year-old man following AstraZeneca’s COVID-19 jab, Covishield.

The $134 million lawsuit filed by the deceased’s mother, Kiran Yadav, states that her son believed the shot was safe and received it because he had to travel via the Railways, which required two doses. The respondents in the case are called “mass murderers” in the lawsuit. 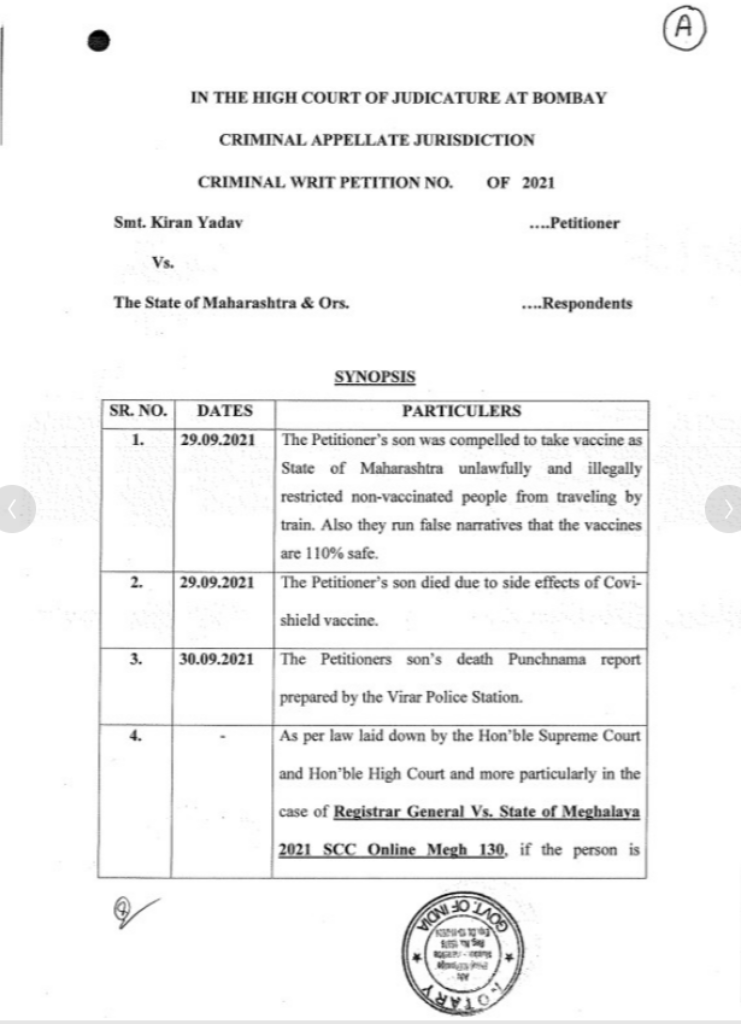 The Indian Bar Association wrote, “The Government of India’s AEFI (Adverse Event Following Immunisation) Committee has recently admitted that the death of Dr. Snehal Lunawat, was due to side effects of the Covishield vaccine. The said report has exposed the falsity of the claim made by vaccine syndicate that vaccines are totally safe.”

In addition to the monetary request, Yadav is also asking for Gates, et. al. to be put through a lie detector test and a narcotics analysis test. 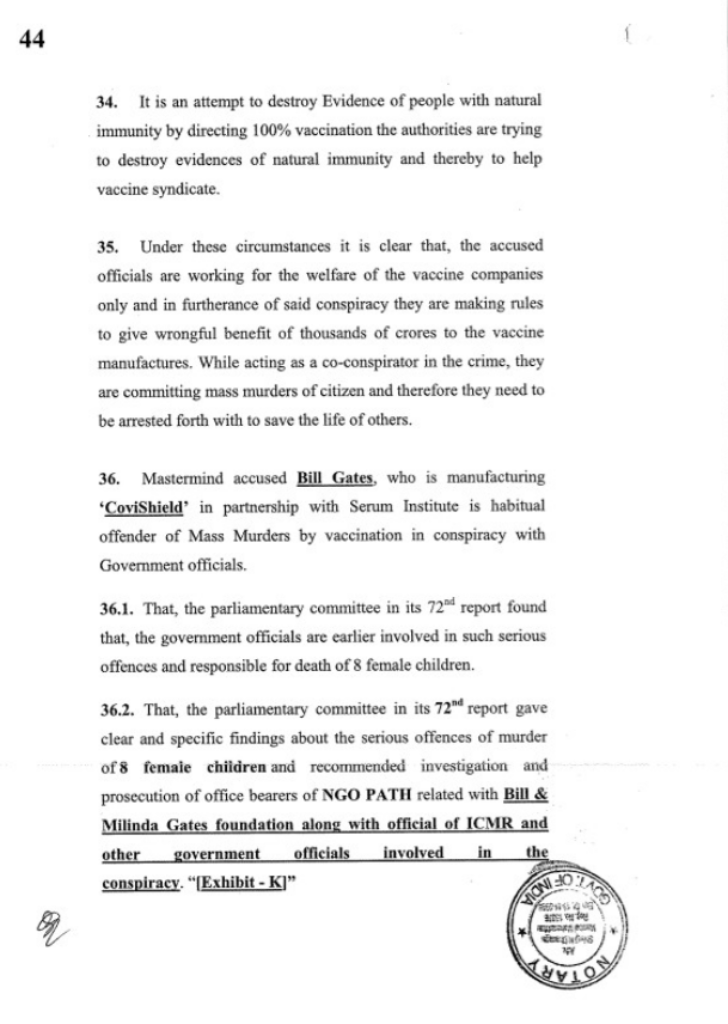 The lawsuit references previous allegations against Gates and his dealings with vaccinations in India, where he was accused of “killing 8 female children by unauthorized trial of HPV vaccines in India and judgment of Constitution Bench of the Supreme Court in Kalpana Mehta’s Case (2018) 7 SCC 1, which is a strong proof against Bill Gates and his vaccine syndicate.

“Petitioner has also referred to the proofs of sinister plan of Bill Gates in polio programme which spoiled the lives of 4.5 lakh [450,000] children in India as they suffered new type of paralysis. This is also an additional proof of Bill Gates’ pervert and criminal mindset.”

It was recently discovered that the death of 33-year-old Dr. Snehal Lunawat in New Delhi was a result of the side effects of the Covishield shot. Lunawat died of cerebral venous thrombosis, bleeding in the brain and thrombocytopenia less than two months after she received the shot. She went into the hospital several weeks prior to her death.

The doctor’s death was not properly reported to AEFI (India’s system similar to VAERS) even though the family attempted to make it so.

Although some in mainstream media will dub the report “debunked,” Robert Kennedy, Jr. uncovered some of Gates’ dealings in India and Nigeria. His report references some of the above regarding polio and HPV shots.

“In 2017, the World Health Organization (WHO) reluctantly admitted that the global explosion in polio is predominantly vaccine strain. The most frightening epidemics in Congo, Afghanistan, and the Philippines, are all linked to vaccines. In fact, by 2018, 70% of global polio cases were vaccine strain.

Further, Kennedy outlined Gates’ involvement with injuries and deaths due to “vaccines” for malaria and meningitis. He said, “In 2010, the Gates Foundation funded a phase 3 trial of GSK’s experimental malaria vaccine, killing 151 African infants and causing serious adverse effects including paralysis, seizure, and febrile convulsions to 1,048 of the 5,949 children.

Red Voice Media will bring you updates on this case as they become available.

I think this news is from two weeks ago. It’s a petition to file a criminal lawsuit. By itself, I don’t think it has any teeth.

Well I’m hoping it will. This is BS that our world’s health care folks, politics , and whom ever supports there agenda gets a free get out of jail card. I believe that the people of the world will win back their freedom and those baster(s) will pay for their tyrannical deeds.

Well, given the trends of the last 20 years (TWENTY YEARS!) I’m afraid things will only get worse.