On Saturday morning, Stew Peters announced on his Telegram channel that Scott Quiner [1], whose story we have been following as his wife, Anne, fought against a hospital wanting to allow him to die, has passed away.

“It’s not easy to bring you this news,” Stew posted. “Scott Quiner has passed, and is with Jesus, in Heaven.”

Tired of the ads? Go Ad-Free and Get EXCLUSIVE Content, Become a PREMIUM USER [2]

Scott was originally at Mercy Hospital in Coon Rapids, Minnesota, where doctors told Anne they were essentially going to stop treating him and allow him to die because his lungs were in such bad shape. Anne begged them to try other methods, such as Ivermectin, hydroxychloroquine, and increasing vitamins and nutrition.

The doctors there refused, and Anne sought the advice of an attorney. Stew got wind of this and brought the calvary to the Quiners, including attorney Thomas Renz [3], who had been fighting the narrative [4] that Covid shots are completely safe and effective.

Renz was able to get Scott moved to a hospital in Texas, who Anne had spoken with before and who would give Scott proper treatment.

Once there, the doctors said that Scott was the most undernourished patient they had ever seen. This is consistent with Anne’s account of Mercy doctors refusing to give him proper vitamins to help fight the virus. His other organs were working properly, but his lungs were still having major issues.

Those doctors were able to get Scott to the point of consciousness again. But, sadly, there had been too much injury to Scott from his mistreatment at Mercy. One doctor there, Dr. Linda Soucie [5], “vaccine shamed” Anne on the phone, telling her that Scott was in the condition he was in because he hadn’t received a Covid shot. This, combined with other statements and the hospital’s refusal to grant Scott the right to try other medicines, or to let Anne sign an Against Medical Advice form allowing her to bring Scott elsewhere (until Renz got involved), points to discriminatory practices by Mercy Hospital, mistreating Scott because of his “vaccination status.”

Red Voice Media spoke with Renz, who said that Scott’s death was an “avoidable tragedy.” Renz said, Scott Quiner’s passing was an avoidable tragedy that we believe directly resulted from a broken system in which hospitals are rewarded for the deteriorating health, and even the death of patients. We’re grateful for the work of the hospital and the physicians in Texas, but the damage done in Minnesota was apparently too severe.

“We pray for Scott’s family, and pray that our political leaders will step in and end the preventable deaths occurring in these hospitals.” 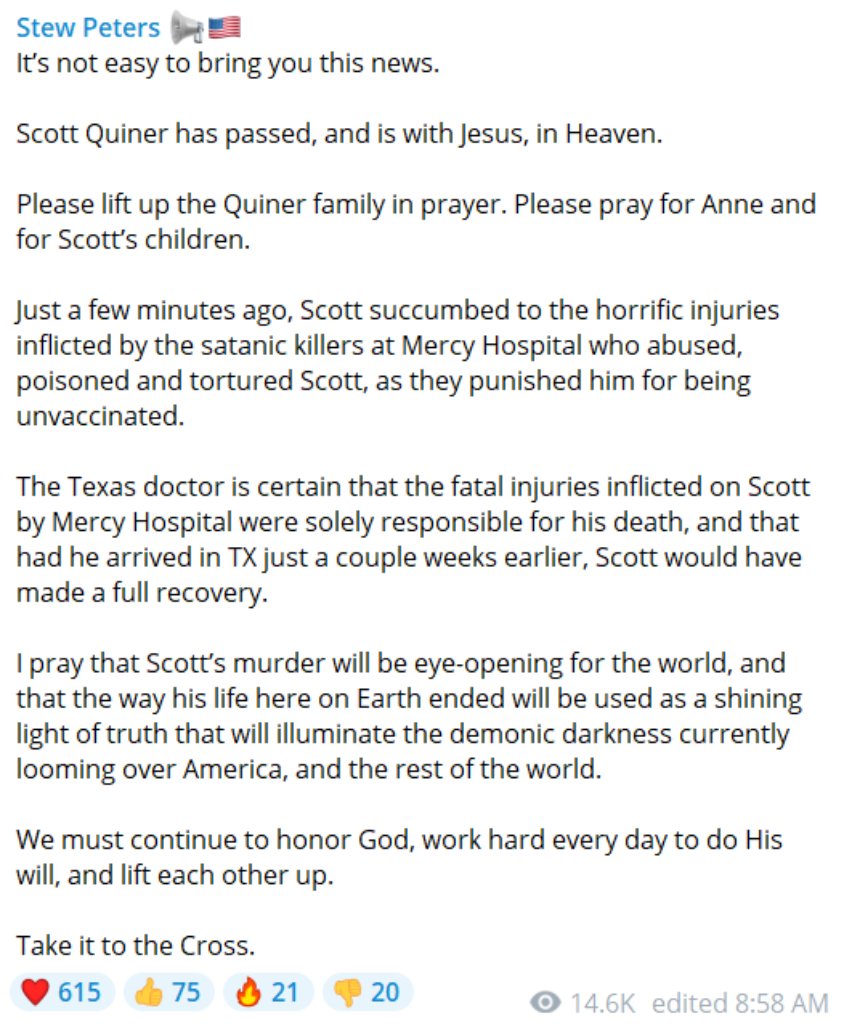 “Just a few minutes ago,” Stew continued, “Scott succumbed to the horrific injuries inflicted by the satanic killers at Mercy Hospital who abused, poisoned, and tortured Scott, as they punished him for being unvaccinated. The Texas doctor is certain that the fatal injuries inflicted on Scott by Mercy hospital were solely responsible for his death, and that had he arrived in TX just a couple weeks earlier, Scott would have made a full recovery.”