New Study: The Omicron Variant Numbers Are In, Vastly Different Than The Delta Numbers

According to a recent study, the Omicron variant of Covid has a 91 percent lower chance of causing death than the Delta variant. Kaiser Permanente in Southern California conducted the study, which has not yet been peer-reviewed. The study also found that individuals who get the Omicron variant are 74 percent less likely to end up in the ICU and 53 percent less likely to require hospitalization. 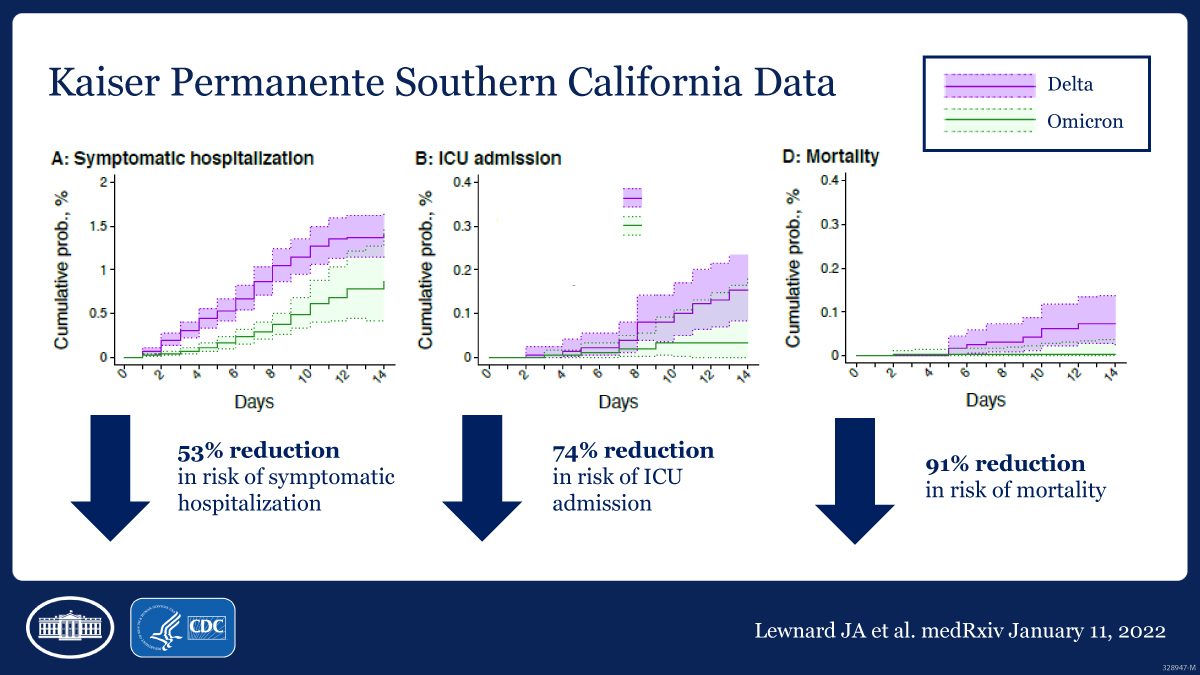 “The duration of hospital stays was approximately 70% shorter, with the median of stays being 1.5 days for Omicron, compared to about five days for Delta. Looking at all hospital admissions for Omicron, 90% of patients were expected to be discharged from the hospital in three days or less.” – Rochelle Walensky, Director of the Centers for Disease Control and Prevention.

Walensky did note that the Omicron variant is much more easily transmitted.

“While we are seeing early evidence that Omicron is less severe than Delta and that those infected are less likely to require hospitalization, it’s important to note that Omicron continues to be much more transmissible than Delta” – Rochelle Walensky.

The study looked at 52,297 Omicron cases and 16,982 Delta cases in Southern California between November 30 and January 1. The study also found that no Omicron cases required mechanical ventilation.

Currently, Omicron accounts for an overwhelming majority of the cases in the United States.

According to a report from the Daily Mail, “Health officials reported Tuesday morning that Omicron now accounts for an estimated 98 percent of COVID cases in the U.S., up from 95 percent last week, and meaning that nearly all cases in the U.S. are of the strain that was only discovered months ago,”

While Omicron is spreading rapidly, some scientists say that this could actually be good news due to people developing immunity to the Delta variant.

It is called a cold been around for thousands of years

I couldn’t agree more, Nancy. These days people run to the doctor for the slightest of things. I swear, that is where the inflated hospitalization numbers have come from.

Tucker: It’s Possible that Asking Questions Is a Patriotic Duty of Americans

Tucker Doubles Down on Blaming Biden For Nord Stream Blast: It’s About as Clear as It Gets