Arizona AG Sends Criminal Referral Charges For Secretary Of State, She Concedes Within A Day

If she didn't do anything wrong...

COCHISE COUNTY, AZ – Following a letter sent by the Arizona Attorney General to a Cochise County prosecutor referring Secretary of State Katie Hobbs for possible criminal charges regarding the takedown of an online petition portal for candidates, the portal managed to be put back online within a day of the letter being sent.

On March 29th, Arizona AG Mark Brnovich contacted Cochise County prosecutor Brian McIntyre about pursuing potential “civil and criminal” actions against Hobbs for taking down the E-Qual system in mid-March, citing the early takedown as being in violation of state law.

“I am writing to delegate my powers as Arizona Attorney General to you to investigate and take any appropriate enforcement actions (civil and criminal) regarding the Secretary of State (SOS) taking down the online E-Qual system beginning on or about March 17, 2022. The Scope of this delegation includes any actions or events prior to the March 17, 2022 take-down that are related to the SOS taking down the E-Qual system.”

The debacle surrounding this E-Qual system being taken offline resulted in some serious back-and-forth weeks before the system was actually taken down.

Back in January, Hobbs began making her intentions to shut down the online portal known. Assistant Attorney General Jennifer Wright warned her that doing so – even in the name of portal updates for redistricting purposes – could result in felony or misdemeanor charges.

By February, Hobbs wasn’t backing down and reiterated her intentions to shut down the online portal sometime in March. Hobbs even went so far as to ask a judge to block AG Brnovich’s office from pursuing legal action against her for it preemptively; Maricopa County Superior Court Judge Joan Sinclair ruled that she would not block the AG from pursing charges if his office so desired.

In AG Brnovich’s March 29th letter, he noted that as recently as December of 2021, Hobbs proclaimed that the online portal would remain up and running “through the end of the statutory signature-gathering period, which is April 4, 2022. However, the SOS later claimed that she would take down the system beginning March 6.”

AG Brnovich pointed to potential violations of ARS 16-1009, a class 3 misdemeanor, and ARS 16-1010, a class 6 felony, in the event Hobbs took down the online portal  – which she did anyway.

The state AG’s office reportedly “received multiple written complaints after March 17, 2022, when the SOS took down the E-Qual system,” and instructed McIntyre to determine “what actions are appropriate to resolve this matter.”

Within 24 hours of this correspondence being sent to the Cochise County prosecutor, the E-Qual system was miraculously put back online, which Hobbs boasted about on Twitter.

“Thanks to a colossal effort by SOS staff & county officials, E-Qual is back up ahead of schedule after necessary redistricting updates for Congressional & Legislative candidates. Voters can sign E-Qual petitions for Statewide, Legislative, Congressional, & some local candidates.” 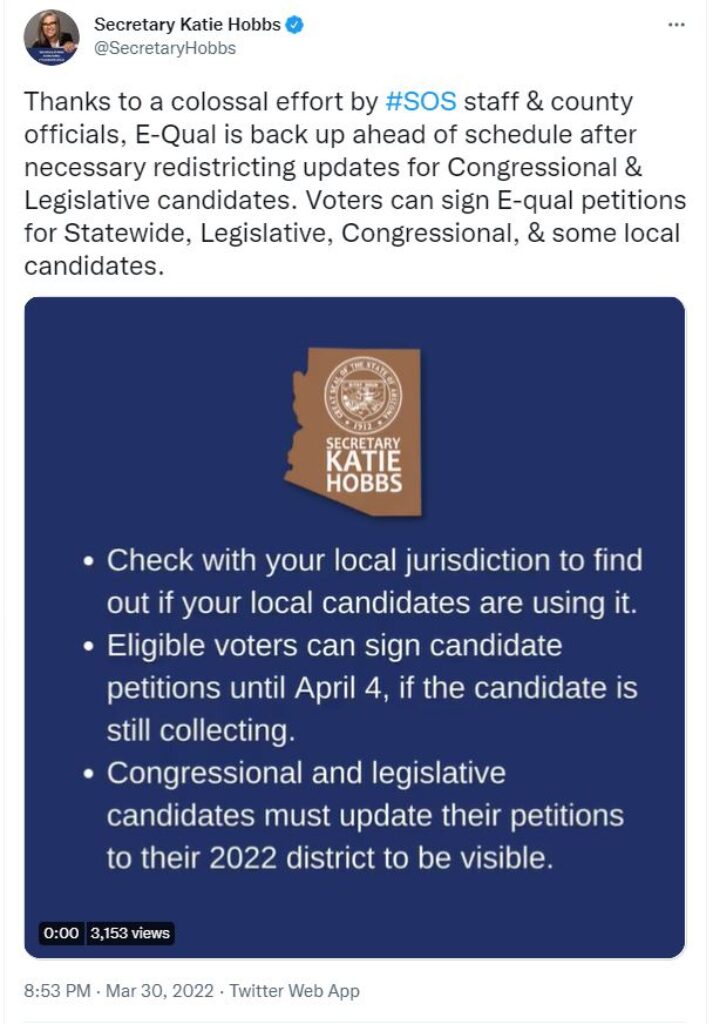 Rather convenient timing. Nonetheless, it’s unclear whether McIntyre will pursue anything for the approximate 13-day period the online portal was offline.

If only brnovich had stood against the fraudulent election and blatant crimes of Maricopa county when he was supposed to.

AG Brnovich has slow walked the known 2020 voter fraud proven by forensic audit. He has failed to hold Hobbs accountable for disappearing the modem used in the election that allowed Dominion internet voter fraud during the election. Hobbs committed several felonies but Brnovich is still “investigating”.

Where is the investigation for the fraudulent election? Brnovich is part of the fraud team and now he wants to join the swamp in D. C.! He is a liar and a traitor!