A former CIA officer recently took to Twitter to gleefully boast about how he took a “special pride” in his efforts to discredit the Hunter Biden laptop story as being part and parcel of Russian disinformation aided in “swinging” the 2020 election “away from Trump.”

The comments coming from this ex-CIA officer, John Sipher, stem from a back-and-forth between him and former Trump White House official Richard Grenell over the Hunter laptop discrediting efforts.

Sipher was one of many so-called intelligence experts who slapped their name and reputation on alleging that the Hunter Biden laptop story from the New York Post back in October of 2020 was part of a Russian disinformation campaign.

A March 18th report from the New York Post mentioned how Sipher was among those “officials” who’d “signed a letter saying that the laptop ‘has the classic earmarks of a Russian information operation.'”

Yet, these 51 purported intelligence experts didn’t have any evidence to back up their assertions at the time – they were merely operating off a convenient hunch that happened to behoove the Biden campaign right before the election.

This letter they’d all signed on to was published on October 19th of 2020, a mere five days after the New York Post dropped the bombshell story on the laptop that has since been validated by a myriad of outlets – to include the New York Times.

Clearly, the massive cover-up and attempts to discredit a valid report by clamoring about Russia during an election year had some consequences. 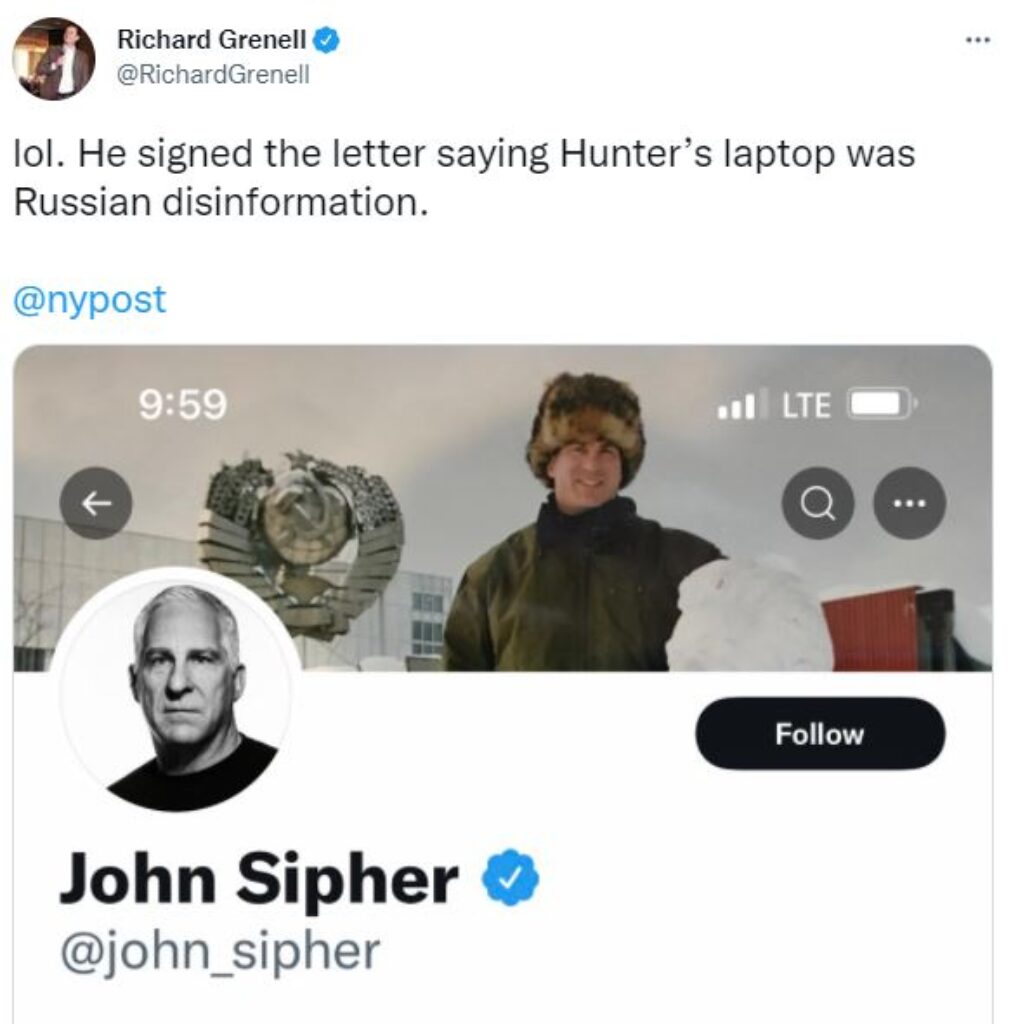 Sipher’s response seemed smug in nature, as he replied to Grenell stating that he bears a sense of pride that his own breed of disinformation resulted in impacting the election in Biden’s favor. 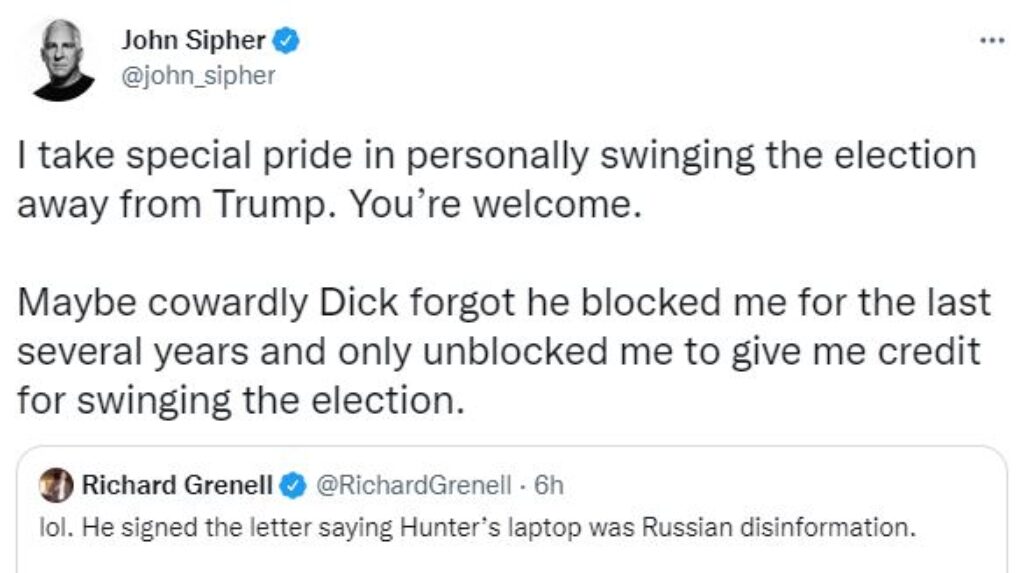 Of course, after smugly boasting about how he relishes the impacts caused by his and others’ false assertions regarding the Hunter Biden laptop story, he shared another post on Twitter trying to clean up his prior post.

“Just to be clear. Disingenuous Dick and his cronies are spinning this story by pretending the letter said something it didn’t say. Didn’t say the laptop wasn’t Biden’s but that Russia and the right-wing were exploring and amplifying the story for disinformation purposes.”

The irony of Sipher prefacing the post with “Just to be clear” to go on and deliver the most nonsensical art of the spin is the chef’s kiss in all this. Sipher is claiming that he and others didn’t claim “the laptop wasn’t Biden’s” but merely that “the story” was shared for “disinformation purposes.”

That makes zero sense considering the October 2020 report from the New York Post was about the Hunter Biden laptop and the contents and communications discovered on it. The laptop was the story – to call the “exploring and amplifying” of the report “disinformation” is to quite literally call the laptop itself a piece of disinformation.

All 51 are traitors who helped foist America’s demise on us.

In the novel the sonder spook always ends up as a fatality.

What is John Sipher’s real name?

Are any of them losing their jobs or going to jail? Or at least getting their assess kicked?

I believe those 51 liars should be looking for another job! How low can you go to destroy America. Might be time for another McCarthy purge of the communists that are running our government.

Unethical behaviour is never ever acceptable–and all the moreso from pathetic sh°ills that egregiou°sly self-serve profound €vil ‘as wholes’, such as the distastefully smarmy Bid€n crim€ family, €t al. . . Pffft! ⚡☝⚡

All need a military trial and then watch them sell their souls to keep from being hung.