“This lack of transparency by electronic voting machine companies has created a ‘black box’ system of voting which lacks credibility and integrity.”

Lake and Finchem contend that the use of these machines in our elections simply pose too many vulnerabilities, specifically in the realm of them being susceptible to hacking and the sort.

Parker also noted that the technology behind these machines have been kept secret from the public, citing, “This lack of transparency by electronic voting machine companies has created a ‘black box’ system of voting which lacks credibility and integrity.”

When it comes to technology of this caliber, the lawsuit claims that testing processes meant to assure that these voting machines are functioning properly – i.e., audits – does little to assuage vulnerability concerns because, it said, “All post-election audit procedures can be defeated by sophisticated manipulation of electronic voting machines.”

The call to action within the lawsuit is simple: End the use of these voting machine tabulators in Arizona and go back to the proven method of counting votes by hand.

Parker added in the suit that this legal effort does not intend to try and upend the results of the 2020 election but is meant to help secure all future elections within Arizona.

“It is only about the future — about upcoming elections that will employ voting machines designed and run by private companies, performing a crucial governmental function, that refuse to disclose their software and system components and subject them to neutral expert evaluation.

“It raises the profound constitutional issue: Can government avoid its obligation of democratic transparency and accountability by delegating a critical government function to private companies?”

The suit also mentioned that the use of electronic voting machines shouldn’t be banned forever outright within the state, but that they could potentially be reintroduced when “the electronic voting system is made open to the public and subjected to scientific analysis by objective experts to determine whether it is secure from manipulation or intrusion.”

Lake announced the filed suit on Twitter on April 24th, writing, “Both Democrats & Republicans are disturbed by the security & transparency issues w/Electronic Voting Machines used to count all of our votes in Arizona. It’s why I filed an Injunction to end the use of these easily corruptible machines.” 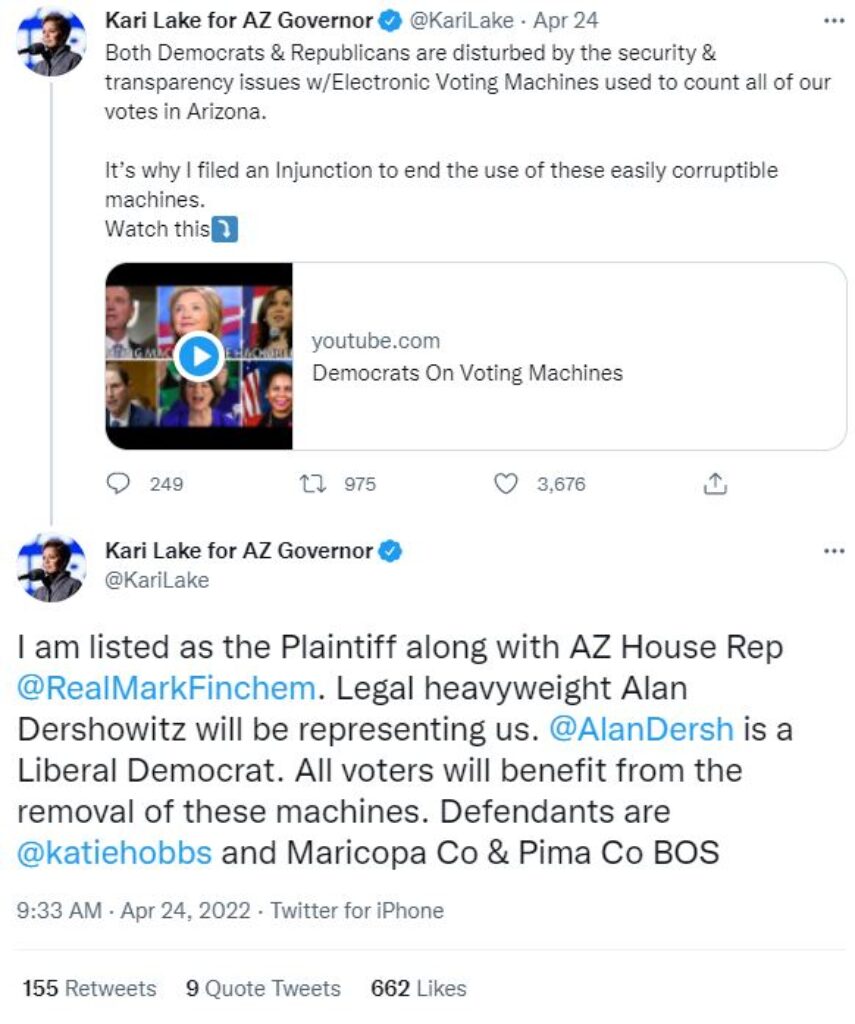 The Republican gubernatorial candidate added that Alan Dershowitz will be representing them in their legal battle, while also sharing a video compilation of when Democrats voiced objections to voting machines throughout the years.

And yet these evil people fought tooth & nail against all research into the last stolen election. TRUMP WON! Everybody knows it.