“in case u need to lose a boner fast.”

Elon Musk managed to make a hilarious jab against Bill Gates on Twitter earlier in April, comparing a photo of Gates to the infamous “pregnant man” emoji available on iPhones shortly after confirming a leaked text exchange between himself and Gates.

The shenanigans started on April 22nd after a Twitter user posted a screenshot of a purported text exchange between Musk and Gates, where Gates was apparently trying to open up discussions around philanthropy and climate change with Musk. 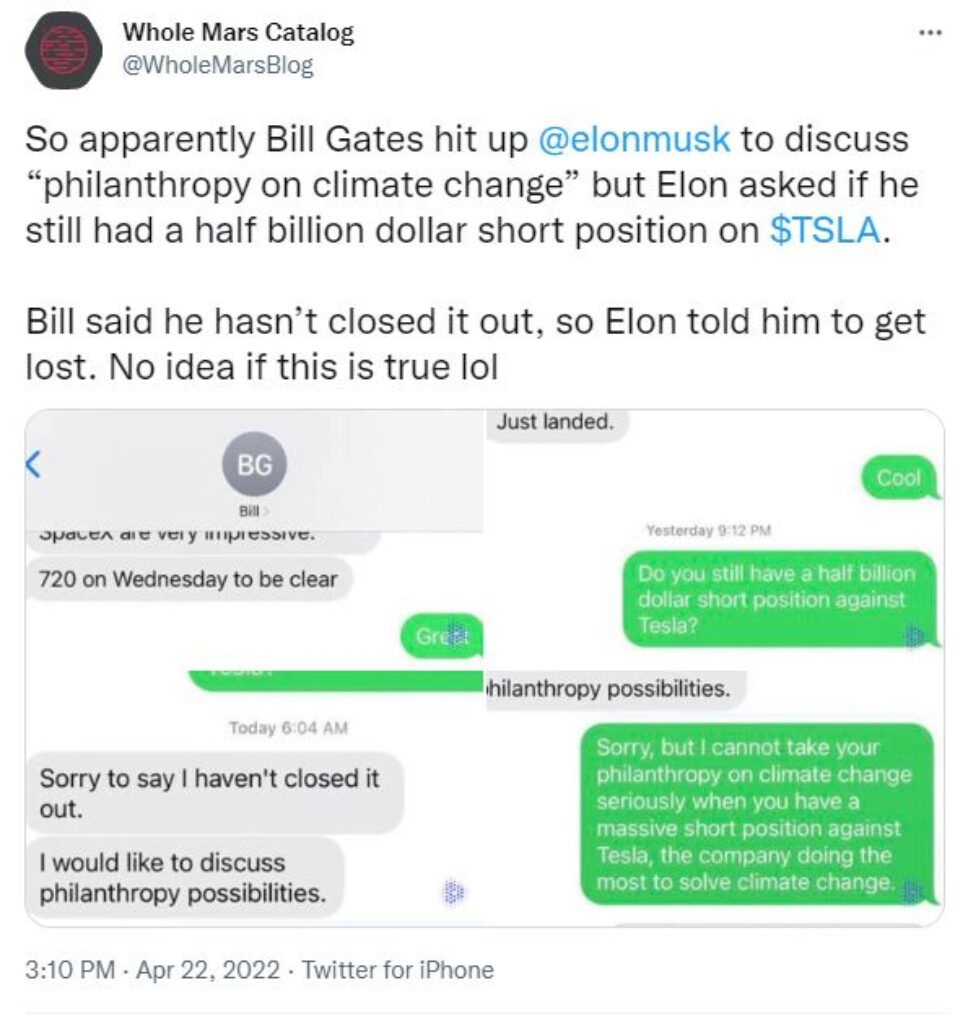 In this exchange, Musk asked Gates, “Do you still have a half billion dollar short position against Tesla?” Gates reportedly responded with, “Sorry to say I haven’t closed it out. I would like to discuss philanthropy possibilities.”

For those unaware of what Musk is referencing with a “short position against Tesla,” he’s referring to the notorious act of short selling a stock which basically entails someone hoping and betting on a stock to plummet in value so as to cash in on their speculation.

With Gates reportedly telling Musk that he still has that short position against Tesla, Musk replied that he couldn’t take Gates “seriously” when betting against Tesla as the company is leading the charge to reduce emissions by way of manufacturing electric vehicles.

“Sorry, but I cannot take your philanthropy on climate change seriously when you have a massive short position against Tesla, the company doing the most to solve climate change.”

There was of course speculation that the text exchange wasn’t the genuine article, so the original poster tagged Elon Musk on Twitter and asked him if the exchange was real.

Surprisingly, Musk responded in the thread, confirming the conversation did indeed take place while also sneaking in a pun regarding the phone call leaked to the New York Times between House minority leader Kevin McCarthy and Rep. Liz Cheney.

“Yeah, but I didn’t leak it to NYT. They must have got it through friends of friends. I heard from multiple people at TED that Gates still had half billion short against Tesla, which is why I asked him, so it’s not exactly top secret.” 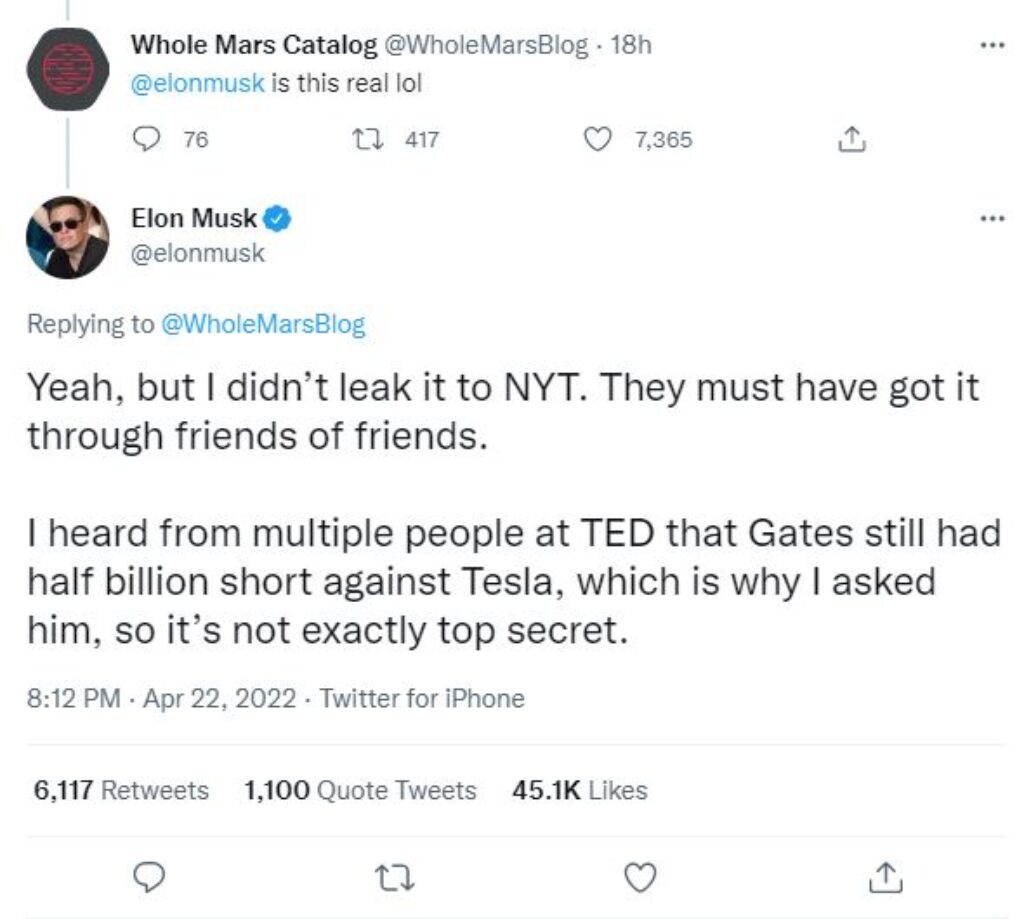 Minutes after confirming the text messages, Musk went on to post a hilarious comparison of Gates next to the “pregnant man” emoji, which we at Red Voice Media reported on the unveiling of the odd emoji made available to iPhone users. Musk captioned the photo with some of his trademark humor, writing, “in case u need to lose a boner fast.” 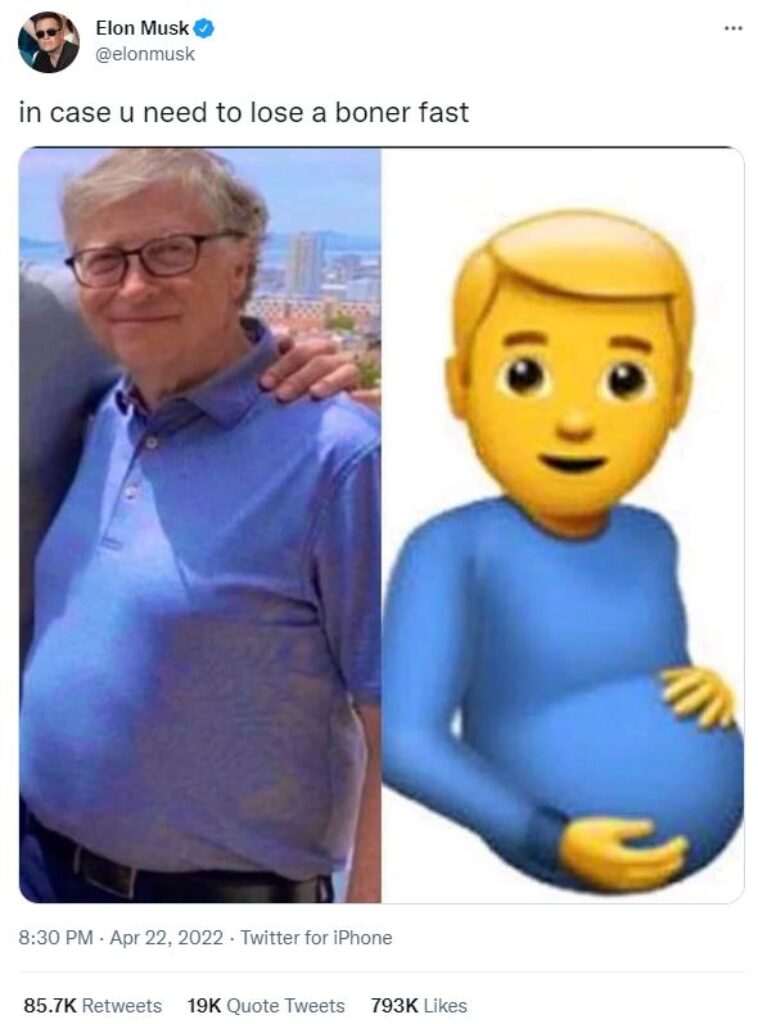 As we’ve noted in previous reports, Musk is engaged in an ongoing saga regarding his effort to outright buy social media platform Twitter, which has sent those on the Left into panic mode as Musk has described himself as being a free speech absolutist.

Borh totally lying through their teeth They both know perfectly well Morgan serving England’s industrial revolution and the coal mining industry is 100 %guilty of causing climate change together with the oil Barons globally and they need to PAY damages and reparations. Tesla musk knows perfectly well what a fraud liar deceiving pos they both are.
And they know Einstein was completely correct when he said people are infinitely stupid and they capitalise on it totally.

This is a next-level smackdown.