"Kent doesn’t have that big of an issue with illegal immigrants so long as they’ll do some ballot harvesting... he has a tendency to go out there and praise people like Bernie Sanders.”

While Kent seemingly boasts much of what the America First-minded constituent would want to hear, Kent is allegedly running a campaign that will undoubtedly raise some eyebrows with conservatives to the point where voters may speculate, “Do the ends justify the means?”

A source who worked hands-on in Kent’s campaign, his former campaign manager Byron Sanford, recently shared details about the goings on of the campaign and the sort that Kent has managed to surround himself with – alleging the aspiring congressman and some of his cohorts are conspiring to engage in shady to potentially illegal acts.

When looking at Kent’s website dedicated to his run for Congress, the first among his listed “Issues” is none other than “Election Integrity,” which is a tad ironic given the details that were shared by the source regarding Kent’s campaign.

According to 18 U.S. Code § 597, it is illegal to offer any sort of “expenditure to any person, either to vote or withhold his vote or to vote for or against any candidate.” Yet, Sanford claimed that Kent was entertaining the idea of buying votes from the local homeless population.

“[Kent] talked about the possibility of getting homeless people to vote by giving them cigarettes, pizza, et cetera.”

For the sake of context, those found guilty of the aforementioned could face up to a year in federal prison. Not to mention, the practice isn’t exactly the bastion of election integrity, which is a key tenet Kent campaigns on.

*The phone number in the text messages has been blacked out for privacy purposes, but Red Voice Media confirmed the number belongs to Ozzie Gonzalez after speaking with him on the phone regarding this story. 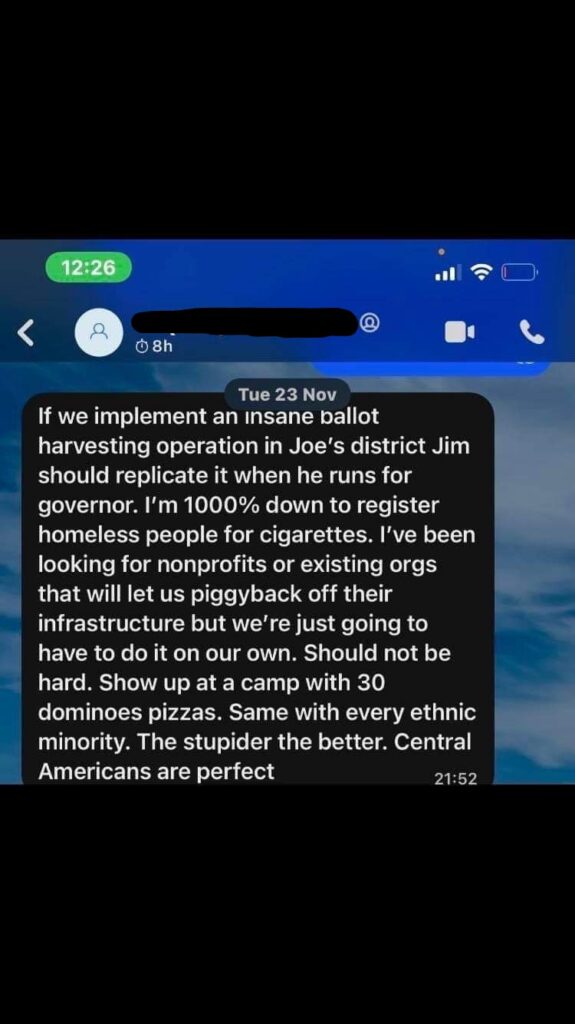 Also, among Kent’s listed “Issues” on his campaign website is a portion dedicated to immigration, which makes sense considering it is a hot topic that conservative voters want to be addressed.

Kent’s website notes that the country needs “strict immigration control,” highlighting how “illegal immigration affects our economy and the ability of working-class Americans to obtain jobs.” Yet, Sanford  claimed that Kent’s campaign doesn’t have that big of an issue with illegal immigrants so long as they’ll do some ballot harvesting.”

“And then [Kent’s] dad owns a company – I believe it’s a construction company – and his dad is in Texas right now hiring illegal immigrants to harvest ballots.”

Additional text messages from Kent campaign manager Gonzalez showcase him mentioning the possibility of getting “illegals” to vote in the election, while also asserting how he’ll “steal the election” for Kent and enlist others in harvesting ballots to potentially discard unfavorable ones. 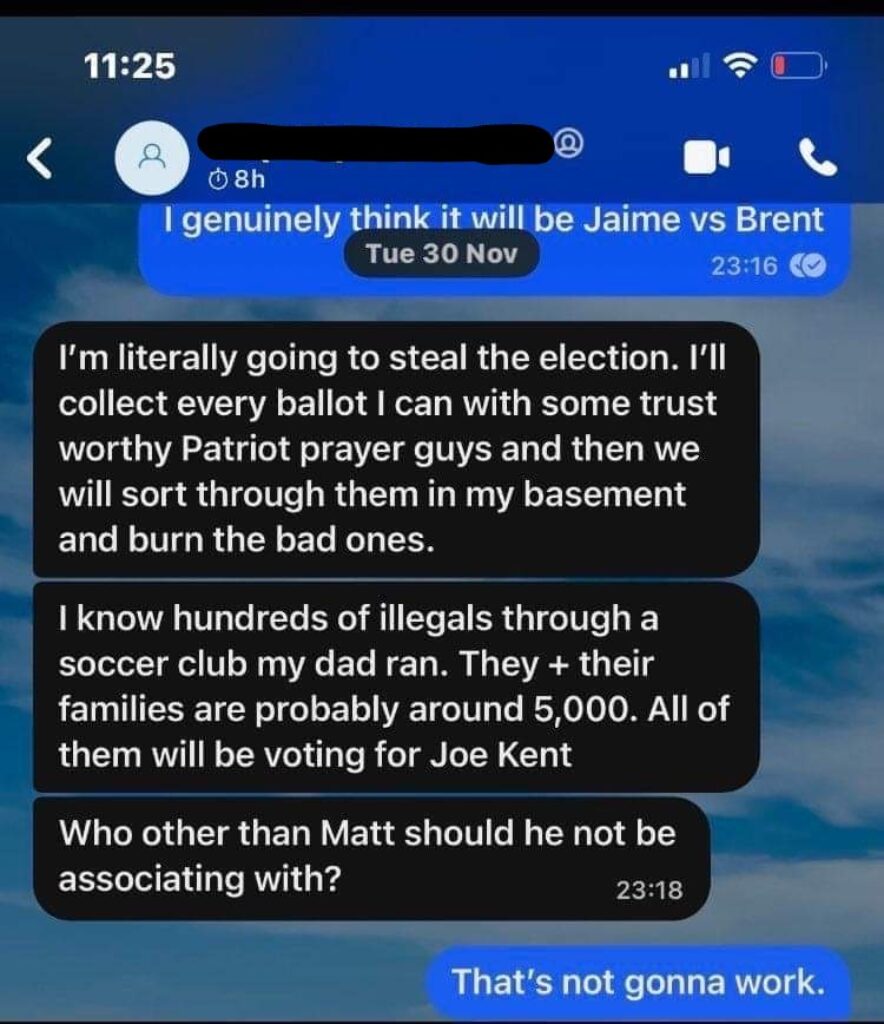 Sanford also alleged that there were talks about potentially using “flashlights” to see if harvested ballots were or were not in favor of Kent – which it needn’t require a wild imagination on why a candidate’s campaign would want to be privy of such favorable and unfavorable votes in their de facto custody. 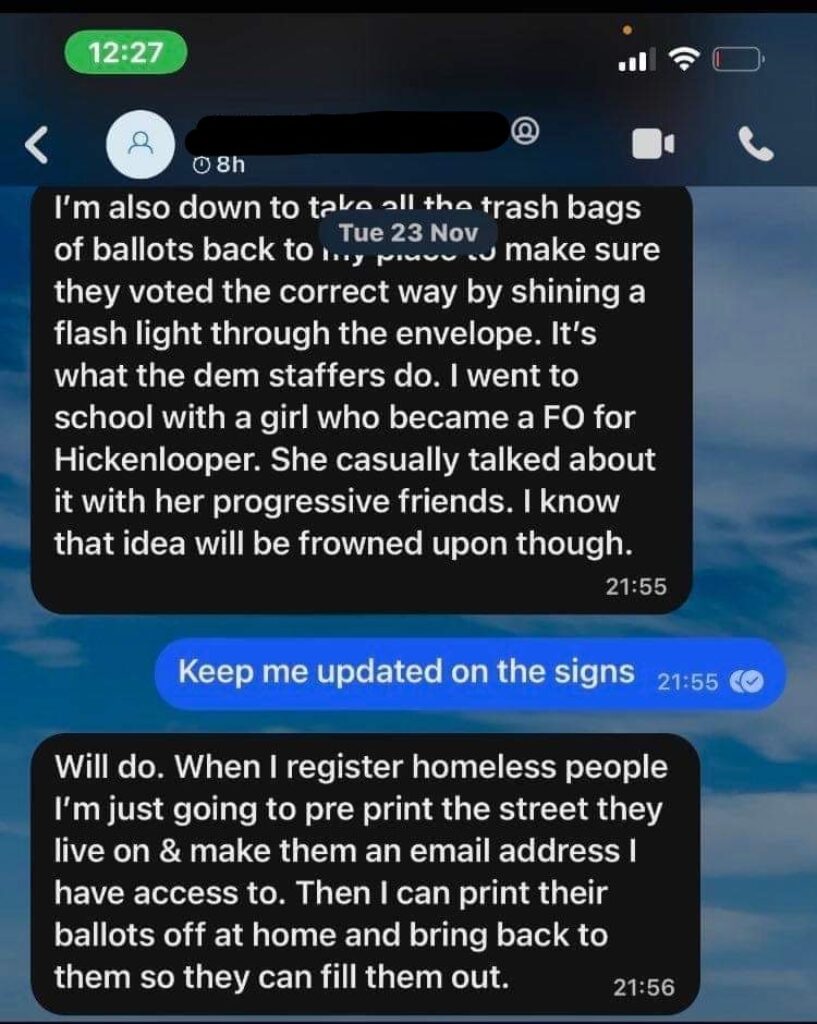 Outside of shady and potentially illegal acts taking place within Kent’s campaign, some of those close to Kent are beginning to see a pattern of ostensibly poor choices such as aligning with Matt Braynard (who Trump fired back in April of 2016 from his role as a leader of the Trump campaign data team) and an alleged conversation between Kent and controversial pubic figure Nick Fuentes over potential social media strategies.

Sanford cited an amalgamation of other aspects he felt demonstrated that Kent is “just not fit to serve as a member of Congress,” among them pointing out that the district Kent is running in “has one of the highest concentration of Ukrainians,” that will likely be turned off by some of Kent’s recent comments regarding Russia and Ukraine.

Speculating on the matter, the Sanford stated, “Regardless of what one’s position is on Russia and Ukraine, whether we should be involved or not, probably not the best idea for a candidate running for Congress against an incumbent to go out and say that Ukrainians should just surrender territory to Russia – and then 10% of the people that live in [Kent’s] hometown are Ukrainian…it just shows a lot of poor judgment.”

But while Kent also proclaims to be America First, Sanford alleged that Kent at times hardly even sounds conservative – claiming that Kent will at times shower Sen. Bernie Sanders, a self-described democratic socialist, with praises.

“He’s not as conservative as some people would think. In comparison to Heidi St. John, for instance, Joe [Kent] has a tendency to go out there and praise people like Bernie Sanders.”

On April 20th, Red Voice Media contacted Gonzalez about the allegations lodged against the Kent campaign. During the call with Gonzalez, he stated that “off the record right now, there’s no validity to them,” and asked for an email to detail out the allegations so that a more polished statement could be rendered.

However, despite sending over the email requested on April 20th directly to Gonzalez, he nor any other representative of the Kent campaign has issued a formal response regarding the allegations.

Needless to say, the allegations against Kent are both heavy and concerning – and certainly a complete divorce from Kent’s boasted principles on matters related to keeping elections secure.

Truth :poitics globally have been corupt for centuries Go back to the Pharoah murdering their families for power to smartmatic and Michelangelo satellites ensuring Eands Dominions are governed to suit he Crown.

It’s a drty business and honesty won’t stand a chance against overpowering corruption. Its that simole Truthfully

This is a hit piece on an honorable person. This is not a news story. Shame on this website for printing it. Retract it immediately and issue an apology to Joe Kent. And fire the guy who wrote it. Even just according to your rules against “discourteous behavior,” and promoting a “respectful and useful online dialogue,” this article is disqualified on all counts.

The owner of this site is a Heidi St. John supporter and has previously published questionable hit pieces on Kent.

I don’t trust all the news I hear. This could be real scam to keep Joe from winning an election. Will wait to decide when the real truth comes out.

Candidates controlled by the Deep State hire mules to harvest ballots with impunity and get a pass . . . Conservatives that TALK of doing the same get jail . . . Yep , , , that sound fair . . . NOT !!!

I’ve been hearing that Kent is the next Crenshaw. I’ve heard this from three different sources. One source is an elite that said they are keeping it under their hat. This needs investigated further. Oh boy!

And I bet every one of those “sources,” like this site, is connected to Heidi St. John.

This is a clear hit piece on Kent. Joe Kent wouldn’t do any of those things.

Who is the fascist writing this lying drivel? Didn’t this used to be a mostly conservative site, now it outdoes CNN

This is a RED FLAG.
The question is it a red flag for Joe Kent or for RedVoiceMedia.
A report weeks ago (more like an attack) on Jim Hoft was alarming to say the least. Subsequently, we been given a report that Jim found a wife in China/HongKong (11 years ago?) who was recently baptized into Catholic Church. It does not line up with his having a Filipino husband. Who’s writing this stuff?
So there’s big credibility conflict on Jim Hoft and Joe Kent.
The Ardis interview was very interesting. It ventured way out into areas that believers would wonder about a new organization wandering to general audience. It did not stand up well for scientists, doctors and others seeking to break through the government veil to truth.
Stew impresses me as a remarkable citizen of heaven and earth, but if these stories end up being short of truth then there’s justification for setting RVM aside.
Is Jim Hoft gay or even pedophile?
Is Joe Kent a fake America First candidate getting ready to cheat in his election?
Let’s clear these questions.

The Stew Peters Show is not the same as Red Voice Media, however we do work closely. After the Jim Hoft episode, RVM was also displeased with the claims made and as such we retracted the episode and also issued an apology. Humans make mistakes, but we believe that it’s important to correct them when made. The link to the retraction and apology is here: https://www.redvoicemedia.com/2021/12/apology-to-jim-hoft-and-the-gateway-pundit/

Good for you. The same thing should happen immediately with respect to this unsupported slam on Joe Kent.
The article above is obviously an opinion piece, a diatrible of suppositions and insinuations and not supported by anything of substance.
It’s appalling that it’s still available for viewing, but it could be and should be deleted posthaste. And that isn’t “censorship,” it’s just insisting on having basic standards for reporting, which this article doesn’t.

Pathetic! Allegations from a former employee. No evidence of anything from Kent. This is no better than any NYT or Politico hit piece. What’s your agenda Mr. Hoyt?

The owner of this site supports Heidi St. John. Just another hit piece.

Just re-read the entire article and can’t stop laughing! It’s not just that holier-than-thou Heidi and her supporters are vicious, they’re also not very smart. Even if such ridiculous allegations were true – and they’re not – no one would describe in detail a plan to commit illegal actions. You jumped the shark on this one.

This is a hit piece, and very obviously done; the mention of Cawthorn also being thrown into the mix, sealed the deal that it’s fake news.