Not that long ago, actress Bette Midler, who is 76-years-old, garnered a great deal of backlash after she suggested that mothers try breastfeeding instead of focusing so much on the shortage of baby formula. Although receiving a great deal of criticism for her stance, it appears the Hocus Pocus star has moved on as she shared an image referring to men as nothing more than pigs and how 80% of women are supposedly against marriage.

On Tuesday, Midler jumped on Twitter to share an image of a woman’s shirt. It stated, “For all those men who say, ‘Why buy the cow when you can get the milk for free?’ Here’s an update for you. Nowadays, 80% of women are against marriage. Why? Because women realize it’s not worth buying an entire pig just to get a little sausage.”

Not only did Midler share the image, she added the caption “Couldn’t help myself.” 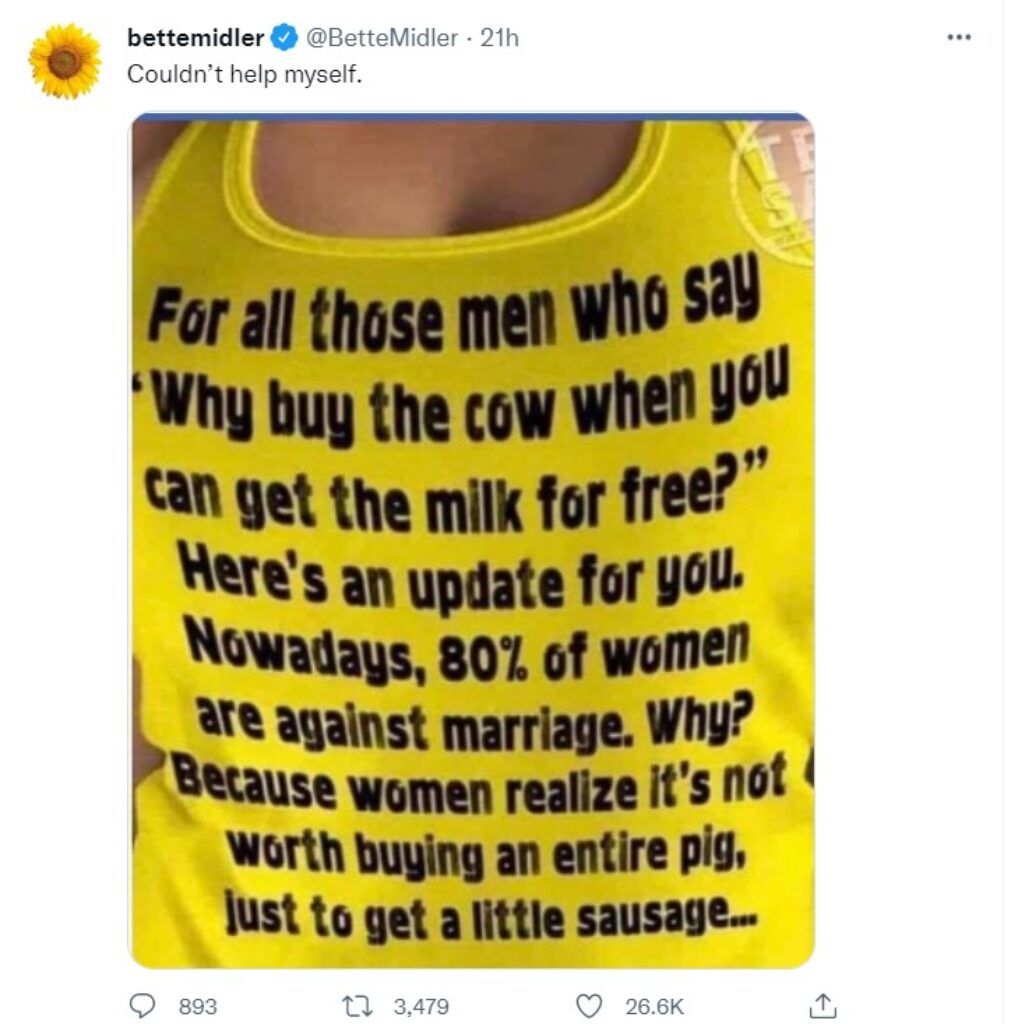 As mentioned above, this isn’t the first tweet from Midler to her millions of followers criticizing a crisis or stance. Users online, even fans, weren’t too thrilled with her statements. “No. Please- we all love you, but delete this now. There are soooooooo many reasons a woman cannot or chooses not to breastfeed. This sentiment is not helping the mothers trying to keep their babies from starving right now.”

Doubling down on her breastfeeding comment, Midler responded with another tweet, reading, “People are piling on because of former tweet. No shame if you can’t breastfeed, but if you can & are somehow convinced that your own milk isn’t as good as a ‘scientifically researched product’, that’s something else again. The monopoly news is news to me, tho, no lie. #WETNURSES.”

Another person, who has been married for 15 years, wrote, “Happily married for 15 years Because I love, respect, communicate and know in my heart she’s the reason I’m alive. (No really…she got me through stage 4 throat cancer) We take care of each other in a partnership that works because we’re equals.”

One user admitted, “ya know I never thought of it like that …just that I didn’t want to do all the housework, directing, or listening to the gripes….I crave freedom, My Time n No Obligations….ahh but as the years go by I crave a hug n warm body to accompany me.”

This piece was written by Jeremy Porter on May 25, 2022. It originally appeared in DrewBerquist.com and is used by permission.