BUFFALO, NY – On the afternoon of May 14th, an 18-year-old male reportedly carried out a mass shooting at a grocery store located in Buffalo that resulted in 10 being killed and three others being injured.

Law enforcement officials and mainstream media outlets have claimed the shooter’s motive was influenced by an inherently racist ideology, whereas others suspect the incident reeks of “a standard Deep State false flag.”

But at the center of this incident are two things that the mainstream media has not been fully sharing: A 180-page manifesto allegedly written by the shooter and a video of the shooter actively firing upon people inside the store while livestreaming to Twitch.

Red Voice Media has obtained both this alleged manifesto in its entirety as well as the unedited video that was livestreamed to Twitch before the service cut the feed off. We will be sharing both of the aforementioned in their entirety for the sake of affording our readers an opportunity to gain a firm understanding of this incident.

The incident itself occurred at approximately 2:30 p.m. on May 14th at the Tops Friendly Market, with authorities identifying the alleged shooter as 18-year-old Payton Gendron. Authorities further allege Gendron had driven from Conklin, New York to carry out the shooting – which is roughly 200 miles from where the incident took place in Buffalo.

Reportedly 11 of the 13 victims shot during the incident were black.

Looking into the manifesto that was allegedly written by Gendron prior to the mass shooting, there is a recurring theme of concerns about “white genocide” and a seemingly blatant admission to planning on carrying out the attack prior to it having occurred.

But there are some key elements that need to be addressed regarding this alleged manifesto:

The first three aspects mentioned are pretty straightforward, but the last bullet point cited can be most easily demonstrated with a picture featured in the alleged manifesto where the shooter purportedly wrote, “And my most recent self pictures are below.” 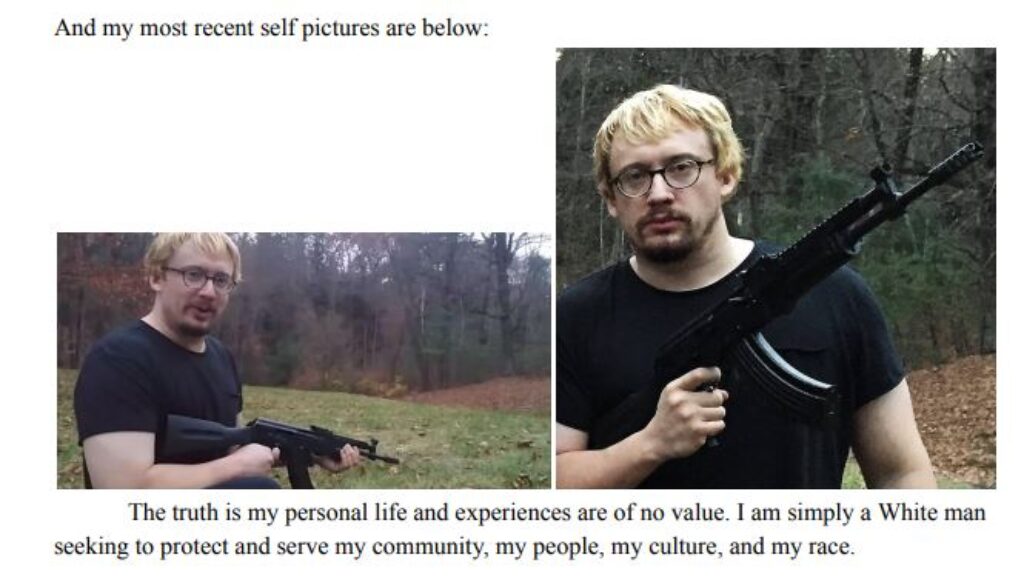 Those pictures shared are not of the alleged shooter Gendron, but that of a internet personality know as Sam Hyde, who has had a panache for online trolling now for well over a decade. Furthermore, Hyde – who has achieved meme status – has been falsely linked to numerous mass shootings in the past. Others may also recognize Hyde’s image from the debunked “Ghost of Kyiv” hoax that spread early-on in the conflict between Ukraine and Russia. 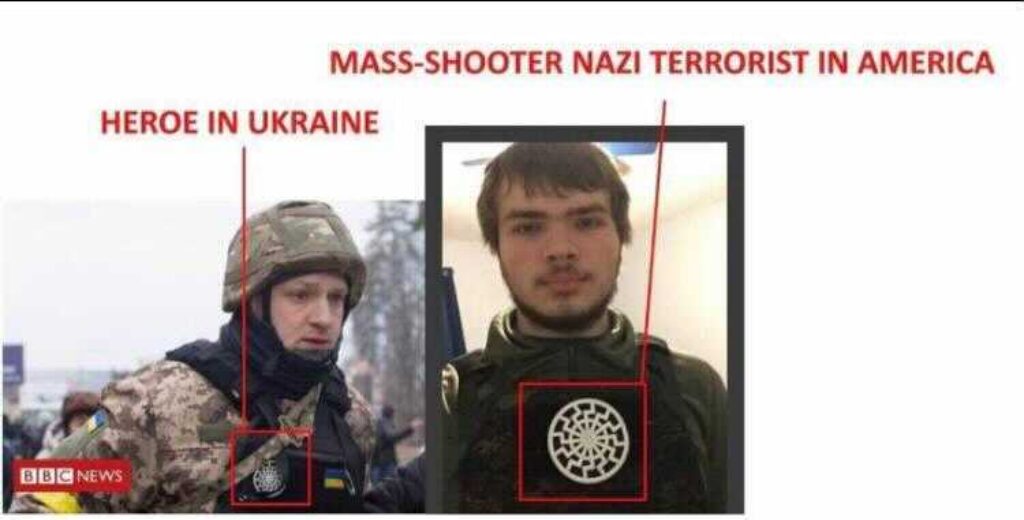 MORE NEWS: Justin Trudeau Is ‘the Worst of the Worst That Canada Has to Offer’: Former NHL Star Theo Fleury [VIDEO]

As such, that aspect should be heavily weighed when determining if this alleged manifesto is genuine or one ridiculously lengthy hoax espousing white supremacist rhetoric and talking points.

However, what is unsettling is the video that was reportedly live-streamed to Twitch of the shooter carrying out the attack.

In the video, the shooter can be seen driving around what appears to be a residential area for a few minutes and making the occasional stop, seemingly due to him trying to figure out where he was going. The shooter eventually pulls into the parking lot of the Tops Friendly Market, briefly parking before saying, “Just gotta go for it.”

He then pulls up to the front of the grocery store, exits the vehicle, and shoots his first victim who appears to be a white woman walking by. The shooter then immediately opens fire on three other people outside the store.

While approaching the store on foot, the shooter fires several rounds through the window and then enters – shooting two women who were on the ground. He then reloads the weapon and fires one more round into the head of one of the women shot moments earlier.

The video feed starts cutting in and out at this point, but one other person can be seen being shot by the suspect. As the shooter looks around the corner of one of the checkout aisles, a man is on the ground and screams as the suspect has his rifle pointed at him. The shooter then says, “Sorry,” to the man and walks away without shooting him. At this point, the feed was completely cut off from Twitch.

Rumble has removed the video but we were able to load the shorter version [GRAPHIC WARNING] here:

Needless to say, the incident leaves a lot of questions – especially on whether this alleged manifesto is genuine. But what is abundantly clear is that this shooting will reinvigorate discussions in Washington about topics like gun control and the ilk.

Payton, Irish meaning noble, Gendron French meaning heir to family estates.
Old Catholic families most likely aka neo nazi families.
His mum and dad both engineers for NY government Say no more!Mummy very active in PTA and school activities and his dad described as weird,mum as snooty by neighbours.
His dad has demonic penetratibg eyes that even in photos of him smiling somehow are,imo, very disturbing.A child doesn’t have such deep rooted homicidal aspirations from watching TV His motivations have imo come from his family background.

Gendron is a Jewish surname.
You are brainwashed… Watch Europa the last battle.

I don’t think watching a factionalized movie of WW2 is really a great source. Just on google search and, would you look at that, Gendron is Irish. Wow, it only took me two seconds! Even on the imdb page for europa, it says it’s a historical revisionism.

I think you’re right stevor. I saw the interview with Lewis, the guy that talked to the shooter the day before and also saw him surrender. He said he put the gun to his lower jaw then decided not to pull the trigger, then put the gun down and took off his vest then laid down and waited for the police to get there and arrest him. That’s like someone coming out of an MK Ultra trance. That video has been taken down…

Time to start public executions. Hanging or firing squad will do just dandy. The authorities have the video of him killing innocent people why waste the money, time, and put the victim’s family through more heart ache.

Would be to easy on him to just end it, get info out of him 1st.

Nothing to do with racism… First few victims outside the store are def. White. Another stupid attempt to take guns from law abiding American people in my opinion. New Zealand shooting was a false flag just like this one… None the less its a tragedy. Someone should get to the bottom of this and punish those that played part in it.

Manifesto said he was inspired by Christchurch which was the ultimate ff attack and which likely never actually happened. This seemed too Grand Theft Auto. I’ve seen gunfire in the hood and after one shot everyone bolts. Not here. Everyone stayed in the same spot which never happens. His shot placement was too good for anyone without extensive training. Shots through bulletproof window just happened to hit two women? No blood on walls or floor? The whole thing seems fake AF. Crisis actors or deepfake.

Right at the beginning of the video, the man behind the car was not shot, and yet he fell almost immediately the woman was shot. The shooter then “followed up” by firing a few shots at the man on the ground…

Inside the supermarket, he shot someone lying on the floor with a semi-automatic in the head, and yet the head didn’t explode in blood! It just moved as if it was hit by a puff of gas…

Last I check, I haven’t smoked anything. But why do I sound like I am tripping?

So why does he have the word nigger written on the nozzle of his gun?

I suppose a ‘racist’ is now defined as anyone with a weapon because he killed both black and white people. AND he drove 200 miles to do it? That’s just not right. Something is very wrong with his act and his so-called manifesto story, really wrong.

So far, we’ve heard only a loud outcry from the politicos for the black lives lost. Apparently, white lives do not matter to the sitting politicos. They are too busy pushing gun control and 2nd Amendment rejection. Wait. This is not the end. The Democrats will begin to stir up a huge war using the word RACISM as propaganda. Why? They have to divert attention from the mid-term elections in order to have a chance in hell of winning a musical seat. And if this is what it appears to be–alphabet agency directed–we will see more such shootings before then in support of the sitting fascist regime.

Do people even research this shit? Or do they just CTRL + F and type in random shit until they find something they can make a conspiracy out of?

Justin Trudeau Is ‘the Worst of the Worst That Canada Has to Offer’: Former NHL Star Theo Fleury [VIDEO]