RICHMOND, VA – According to a report from The Gateway Pundit, a bullet reportedly pierced through one of the windows of the Virginia Attorney General’s office building days after he’d vowed to take legal action against pro-abortion extremists in the event they unlawfully disrupt church services.

On May 7th, Virginia AG Jason Miyares issued a statement amid the growing threats coming from pro-abortion groups who had voiced intentions to unlawfully disrupt church services in light of the leaked Supreme Court daft opinion overturning Roe v. Wade.

“Some on the extreme left have responded to this week’s reprehensible leak of a draft Supreme Court opinion by calling for pro-abortion protests inside and outside of Catholic parishes this Sunday. I deeply respect the First Amendment rights of speech and assembly. But no one has the right to interfere with the fundamental and natural right of all Virginians to practice their religion in peace.”

AG Miyares’ statement stressed that it is his duty to protect the rights of all citizens of the state, to include those trying to exercise their respective religions. As such, AG Miyares pointed to federal and state law that that criminalizes those attempting to impede upon the religious rights of others.

“Federal law makes it a felony to intimidate, interfere with, or obstruct any person who is seeking to exercise his or her First Amendment right of religious freedom at a place of religious worship. Similarly, Virginia criminal law prohibits obstructing the free movement of other persons, trespassing on church property, or obstructing proper ingress to and egress from a church. My office will be monitoring protest activities directed at houses of worship and will refer alleged criminal violations to the United States Department of Justice or to the appropriate Commonwealth’s Attorney.”

On top of threatening criminal prosecution against the pro-abortion extremists who’d entertain obstructing people’s religious freedoms, the Virginia AG also highlighted that civil suits could also be brought forth against those attempting to unlawfully disrupt church services.

“Furthermore, federal law authorizes states to bring civil suits to protect their citizens’ free exercise of religion. If protest activities directed at houses of worship cross the line to illegal obstruction, intimidation, or interference, I will not hesitate to bring suit to protect the religious freedom of the citizens of this Commonwealth.” 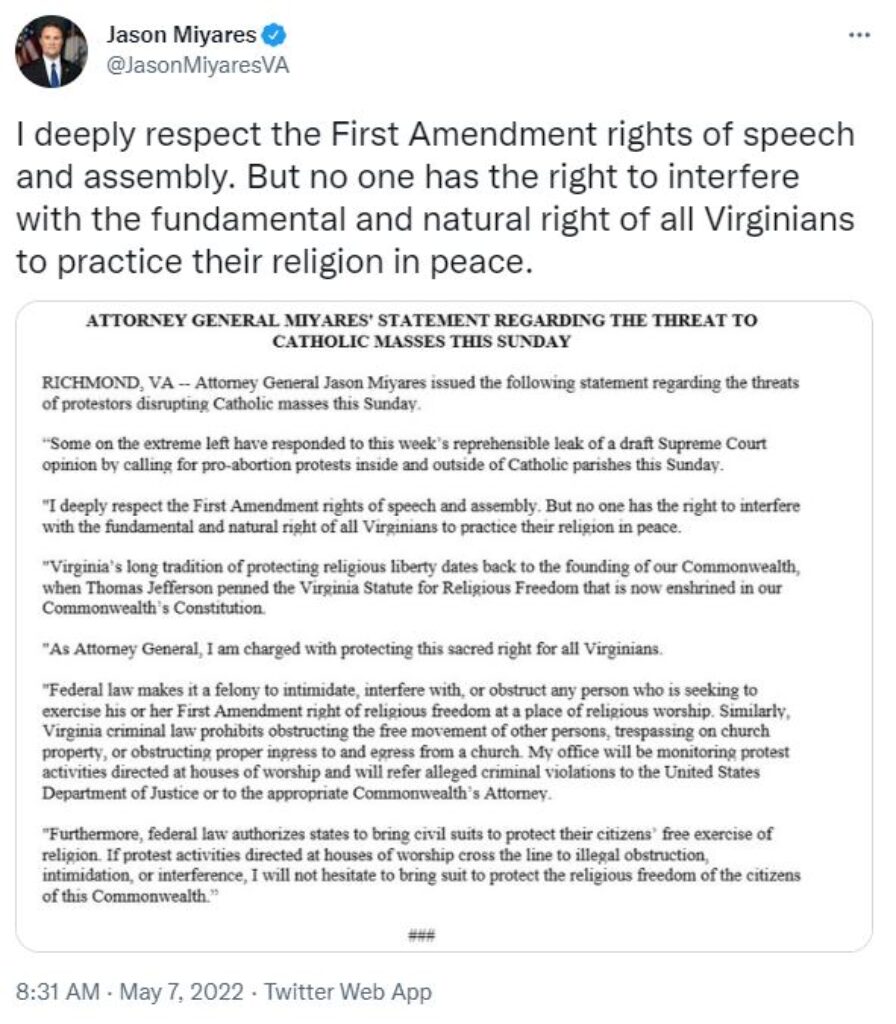 On the evening of May 9th, two days after AG Miyares issued the aforementioned statement, authorities were notified that bullet had pierced through a sixth floor window of the Barbara Johns Building – a.k.a., the Virginia AG’s office.

Speaking to the Washington Examiner, Chief Deputy Attorney General Chuck Slemp stated, “There is no indication that this incident was targeted at the OAG specifically or any individual employee.”

The round was reportedly located by cleaning staff on the sixth floor and the matter is currently being investigated.