Needless to say, it will be interesting to see what comes...

SAN FRANCISCO, CA – According to a report from The Gateway Pundit, SpaceX CEO Elon Musk is placing a pause on the acquisition of social media platform Twitter, citing that he’s awaiting further details on how many of the accounts on the platform are spam or bot accounts.

Musk, ironically, made the announcement on Twitter during the early morning hours of May 13th, writing, “Twitter deal temporarily on hold pending details supporting calculation that spam/fake accounts do indeed represent less than 5% of users.” 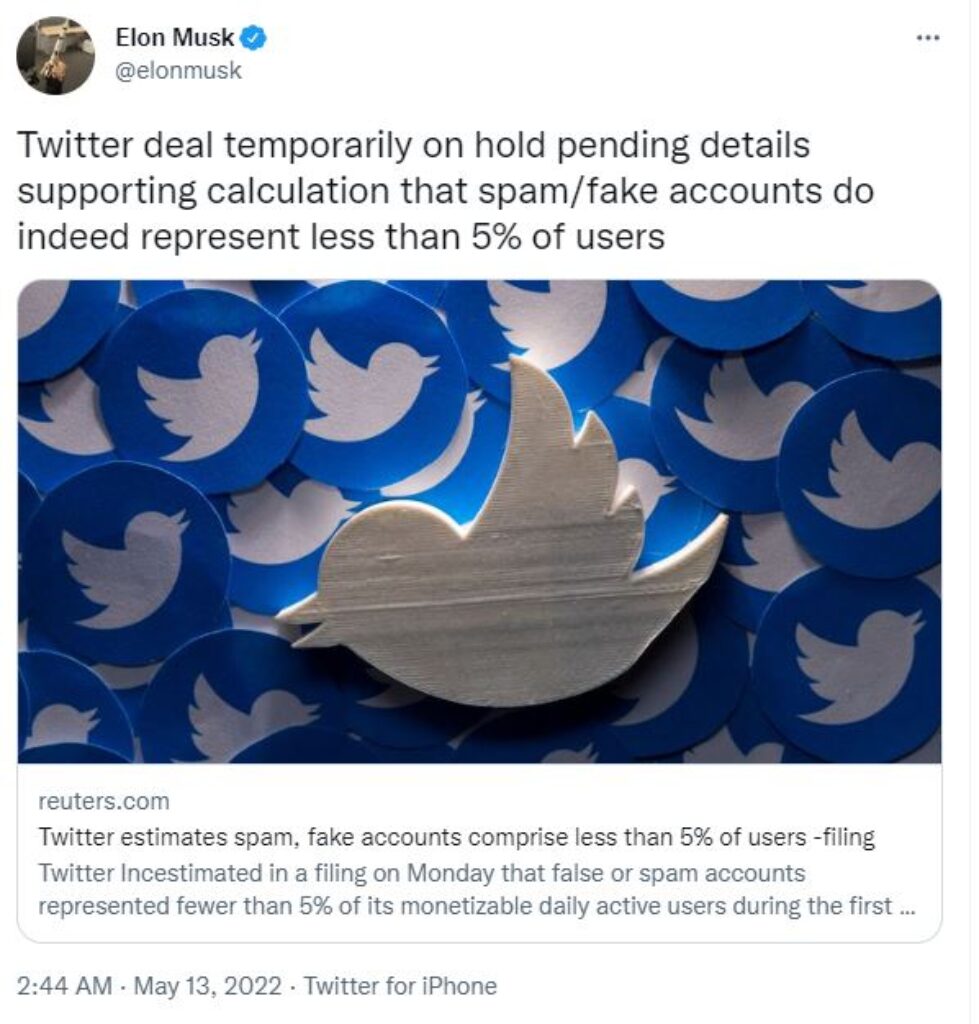 Sharing a link to a Reuters article regarding the matter of spam/fake accounts on the social media platform, the outlet reported that Twitter “had 229 million users who were served advertising in the first quarter” of 2022, and the respective filing alleged that “false or spam accounts represented fewer than 5% of its monetizable daily active users.”

Nonetheless, despite Musk saying the transaction is currently on hold, the billionaire did confirm in a follow up post to Twitter that he’s “Still committed to acquisition.”

MORE NEWS: Kash Patel Is Suing Them All, Filing Defamation Lawsuits Against NYT, Reveals Who’s Next On The List [VIDEOS]

Without having a direct look under the proverbial hood, it’s hard to say whether or not Twitter’s analysis of the number of spam or bot accounts is accurate, meaning Musk being curious of the validity of Twitter’s assessment is fair.

In a September 2021 blogpost from Follower Audit, contributor Shivam Singh notes that “eliminating Twitter bots has always been a major concern” of the social media platform and that the “past couple of years alone has seen an enormous surge in the number of automated bot accounts.”

Obviously, eight months have passed since the aforementioned blogpost was published, but it’s hardly unreasonable to question whether or not Twitter could’ve scrapped over 60% of the estimated number of bot accounts operating on the platform – let alone, combat new bot accounts from cropping up in the wake of booting other bot accounts off.

And even Twitter admitted last September in one of their own blogposts that navigating “the more complicated questions of whether an account is automated, a real person being paid to behave like a bot, or a real person who just resembles a bot” is often arduous and tantamount to playing “a game of whack-a-mole.”

Needless to say, it will be interesting to see what comes of the bot conundrum that has Musk inquiring whether Twitter is accurate in their disclosed estimation.

If it turns out Twitter is lying/fudging/deflating the actual number of bot accounts in total, it’s my understanding that Twitter will have to pony up ONE BILLION DOLLARS to get out of the deal. That being the case either way it goes the censor dummies will wind up losing their jobs once Twitter stock CRATERS if Elon walks away. I’d say that’s a win going forward either way.

Kash Patel Is Suing Them All, Filing Defamation Lawsuits Against NYT, Reveals Who’s Next On The List [VIDEOS]