“When you tear out a man’s tongue, you are not proving him a liar. You’re only telling the world that you fear what he might say.” – George R.R. Martin, A Clash of Kings

That quote from George Martin fits pretty well with this SkyNews clip where the Dermot Murnaghan interrupts and then cuts off his guest Dmitry Polyanskiy.

Dermot Murnaghan: British Defense Secretary’s statement today, Ben Wallace, who talking about Victory Day more or less said that today’s Russian forces are dishonoring their grandfathers who fought the Nazis and he said and I quote in there that what Russian forces are doing now in Ukraine is mirroring fascism.

Dmitry Polyanskiy: Well, it’s entirely up to his conscience to say such blasphemous things, I can only reply by saying that it’s absolutely disastrous and shameless, what UK is doing right now, forgetting everything what we’re fighting about, and I will only give you one example I will show you what appeared today as the official page of President Zelensky. Here you can see it in Instagram. And this is emblem here. You see it like right now. I will make it bigger. So that’s the emblem. Do you know what it is? It’s an emblem of a German division, SS division in the Second World War. So he published on the Victory Day, an emblem of fighter of Right Sector…

Dmitry Polyanskiy: …with this emblem, saying that this is a symbol No, no, don’t interrupt me, sir. Please. This is a symbol of fight against Nazism, as he sees it. This was deleted after half an hour, but of course, we have a copy of this. And do you know that the Totenkopf division was responsible for murder of 100 Britain’s in France in the beginning of the Second World War? So it means that the UK now is covering Ukrainian authorities which display Nazi symbols…

Dmitry Polyanskiy: …during the Victory Day. And these Nazi symbols were used by the same regiments that killed British people.

Dmitry Polyanskiy: Isn’t that a little bit strange for…

Dermot Murnaghan: I, I, I, I’m only interrupting you because you’ve, you, you, you, you’ve had your say, and we’ve run out of time, Mr. Polyanskiy. Thank you very much indeed to talk to you. And I should just say that uh those images that uh were shown by Mr. Polyanskiy, well, we haven’t been able to independently verify them, aah ahh you’re watching Sky News.

I searched to find the images Dmitry showed, but Dermont claimed they couldn’t independently verify. It took me less than a minute to find a few. Below are two of them.

The first one is from Armstrong Economics: Zelensky Fights Alongside Nazis [1] and shows the very same two images that Dmitry shared.

The second image is from Gelora: Waduh, Zelensky Post Photo of Ukrainian Soldiers Wearing Symbols of Elite Nazi SS Forces [2] and shows the emblem close up and also with a few Nazis from World War 2. 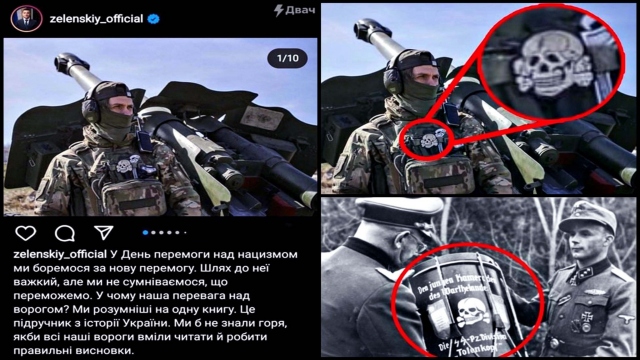