On the other end of the spectrum, 19 officers stood in a hallway waiting for 'room keys'

UVALDE, TX – While the nation learns of the disturbing lull in time between when Salvador Ramos started his shooting rampage and when police ended the threat, we have also learned of a true hero of that horrid day.

Jacob Albarado is a US Customs and Border Protection agent who was off duty and getting a haircut Wednesday when he was informed of the active shooting taking place at Robb Elementary School. Albarado’s daughter attends the school and his wife, Trisha, teaches the fourth grade at the school and sent him a text message that read, “There’s an active shooter,” she wrote. “Help. I love you.”

Albarado left the haircut, taking his barber’s shotgun with him, and went to the school. 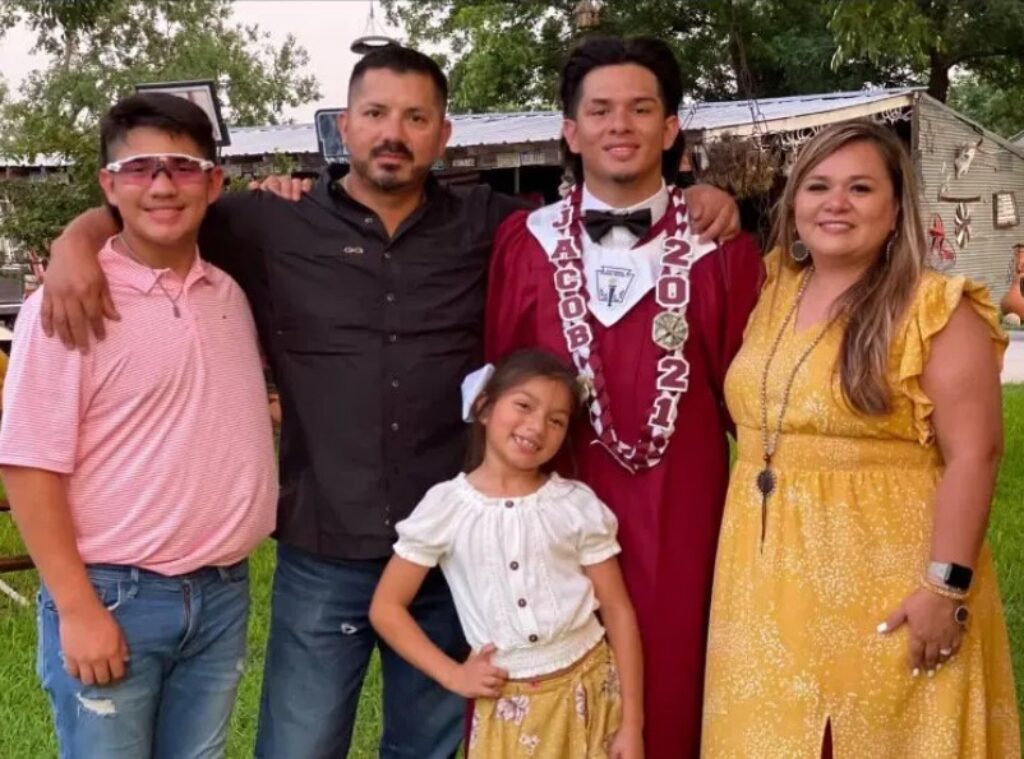 When he got to the school, the Border Patrol tactical team was prepping for entrance in the wing where the shooter was located. Reportedly, Albarado made plans with other officers on scene to enter the school and begin evacuations.

“I’m looking for my daughter, but I also know what wing she’s in,” he said, “so I start clearing all the classes in her wing.”

The New York Times reported, “Two officers provided cover, guns drawn, he said, and two others guided the children out on the sidewalk. They brought out dozens of kids and their teachers, he said, many of whom emerged screaming.”

He found his eight-year-old daughter, who had been locked in a bathroom, hugged her, and then continued evacuating the children.

His wife had been hiding under desks with her students, who also made it out in the evacuations.

“I’m so angry, saddened, and grateful all at once,” Albarado said. “Only time will heal their pain and hopefully changes will be made at all schools in the U.S. and teachers will be trained & allowed to carry in order to protect themselves and students.”

He also told the Times, “I did what I was trained to do.”

On the other end of the spectrum, police officials said on Friday that there were 19 law enforcement officers standing in a hallway while Ramos was shooting. Reportedly, the officers were waiting for “room keys and tactical equipment.”

MORE NEWS: Victor Davis Hanson: The FBI Has Become a Retrieval Service for the Biden Family

Texas Department of Public Safety (DPS) Col. Steven McCraw said in a press conference Friday, “The on-scene commander at that time believed that it had transitioned from an active shooter to a barricaded subject.

Pedro “Pete” Arredondo, who has nearly three decades of law enforcement experience and was also just elected to the City Council, is the on-scene commander and decisionmaker. It took a total of 80 minutes for police to make contact with Ramos- from 11:30 am to 12:50 pm.

However, children inside adjoined classrooms 111 and 112 were calling 911 at the same time, asking for the police to come save them.

“From the benefit of hindsight where I’m sitting now, of course, it was not the right decision,” McCraw continued. “It was the wrong decision. Period. There’s no excuse for that.”

It was originally reported that a School Resource Officer was on scene and exchanged gunfire with Ramos. That was discovered to be incorrect information, however, as the SRO was not at the school at the beginning of the incident.

MORE NEWS: Rep. McClintock: Democrats Are Doubling Down on Foolish Policies That Unleashed the Worst Inflation

While 19 officers waited outside the classroom, a little girl inside room 112 called 911 at 12:03 pm. The girl remained on the line for just under a minute-and-a-half, and then called back at 12:10 pm saying that there were several deceased children.

The Border Patrol tactical team arrived with their shields at 12:15, and the little girl called back at 12:16 pm to tell them that there were multiple children alive- eight to nine, she said.

Three gunshots can be heard on the line with dispatch at 12:21 pm.

“The belief was that there may not be anybody living anymore and that the subject has now tried to keep law enforcement at bay or entice them to come into (die by) suicide,” McCraw said.
It’s hard to grasp that the above was the belief of the law enforcement on scene, when dispatch would have purportedly been communicating the aforementioned incoming 911 calls with them.
The border patrol tactical team finally entered the barricaded room (after the janitor brought them the keys) at 12:50, when Ramos was shot and killed.
On Thursday, Uvalde Police Chief Daniel Rodriguez issued a statement that said, in part, “It is important for our community to know that our officers responded within minutes.”
However, in this instance, it’s clear that police simply showing up was not enough.

Great example of a cop who wasn’t trained during the millenial era.

A true true hero. I would love to buy that man a beer. I don’t care if the other cops were told to stand by and let the kill count get higher. I hope they know what they did.

My condolences to the families, what a horrific thing for anyone to go through.

This police officer is a hero.
Why do the police officers not have their bullet proof vests and gear in their vehicles at all times? Why would they have to wait for their gear?

The schools where I live all have police officers on duty in the school – they train the teachers, students and employees on what to do in such a scenario. https://www.alicetraining.com/

Now a days even churches have a security officer on duty. I hope they find out who left the door propped open – the doors should be locked – – sadly that is necessary.

The now infamous 19 “policemen” will never forget their cowardice, and will have to live with it the rest of their lives – how are they going to face the citizens of Uvalde who all know they failed to “protect and serve?

Victor Davis Hanson: The FBI Has Become a Retrieval Service for the Biden Family

Rep. McClintock: Democrats Are Doubling Down on Foolish Policies That Unleashed the Worst Inflation

How to Identify a Person Killed by the COVID Vaccine: Dr. Ryan Cole [VIDEO INTERVIEW]