"Providing [Illegal aliens] formula is morally right, and so we certainly support the implementation of it."

Today marked the end of an era for the Biden administration as they said goodbye to the White House Press Secretary Jen Psaki. For the last 16 months, Psaki has been the frontline defense for the Biden administration as she juggled a plethora of issues from COVID-19 to the Southern border crisis. Not to mention the numerous blunders by President Joe Biden she had to defend. But through it all, on Friday, she said her goodbye with her last press conference, and in true Biden administration fashion, it was filled with ramblings, incoherent thoughts, and the idea of hoarding baby formula for migrants at the border was a good thing.

Wanting to give an overall feel for how Psaki’s last press conference went, the video below showed the entire room filled with confusion as neither the reporter nor Psaki could get a word in without being interrupted. The frustration from the Press Secretary is one many have witnessed over her time within the Biden administration. Take a look.

Psaki wished to discuss one of the main topics was, the claims that the Biden administration was hoarding baby formula to hand out to migrants who have crossed the border. Surprisingly, the Press Secretary didn’t deny the accusation. Instead, she said,  “This is a really important question, but it’s hard for us to answer from here,” before adding, “Sometimes the issue at play here is that bigger retailers have a more streamlined process for stocking the shelves than smaller retailers. A lot of people go to stores in their community to go buy baby formula, and it may just be that there is a bit of a delay in stocking those shelves.”

Having spent well over a year spinning the narrative for the White House, Psaki noted, “So we’re working to not just address – we’ve been working to address for months – but we’re working to ensure there is greater supply, consistent supply on the shelves for as long as possible.”

While claiming the Biden administration was working on the issue as many families struggle to feed their infants, the Press Secretary defended the decision to give formula to migrants. “I would also note that we also think it’s morally the right thing to do. This is a difference from the last administration. It is the law, but we believe that when children and babies…are crossing the border with a family member, that providing them formula is morally right, and so we certainly support the implementation of it.”

With Psaki leaving the position, the White House seems excited to welcome the first black and openly LGBTQ woman, Karine Jean-Pierre, to hold the title of Press Secretary.

As for Psaki’s relationship with Fox News’ Peter Doocy, it appears to have ended with professionalism and grace. This picture was shared on Twitter by Doocy himself. 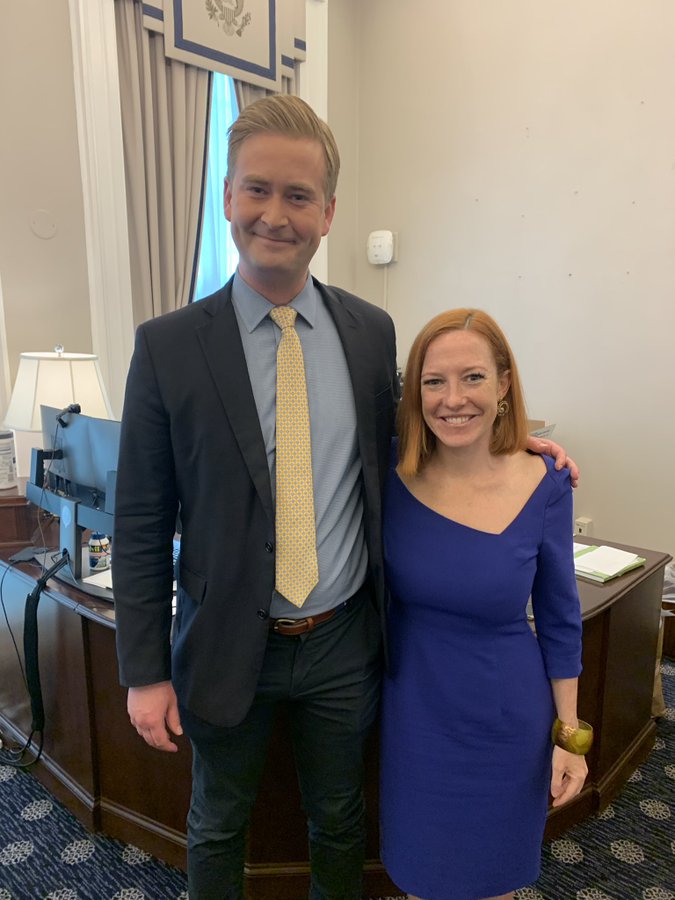 How anyone can get away with lying day in and day out is beyond me. Now we know why they got rid of Emerald Robinson as she was the only press corp really holding the Biden regime’s feet to the fire. Sorry Pete, but she was way better of putting Psaki on the spot than you were. So was Chanel Rion until they quit calling on her. With that said, the regime is bringing in another liar that is even more radical. Choosen not because of qualifications, but because she’s stylish. Can’t wait for this disaster to hold her first press briefing. Popcorn in hand.

Circle Back Pissaki was horrible.