CHICAGO, IL – Chicago Mayor Lori Lightfoot appears to have recently broadcasted what could be construed as violent and even insurrection-like rhetoric [1] in the wake of the Supreme Court leaked draft opinion, telling members of the “LGBTQ+” community that the times require “a calls to arms.”

Republican Sen. Josh Hawley’s press secretary Abigail Marone shared a screenshot of the concerning posts made by Mayor Lightfoot on Twitter, which read, “To my friends in the LGBTQ+ community – the Supreme Court is coming for us next. This moment has to be a call to arms. We will not surrender our rights without a fight – a fight to victory!”

Marone captioned the post with, “Democrat Mayor issues a ‘call to arms’ based on made-up fear mongering,” which is an allusion to Mayor Lightfoot buying into the Democrat narrative that a draft opinion overturning Roe v. Wade is somehow a foreshadowing threat to the rights enjoyed by gay Americans. 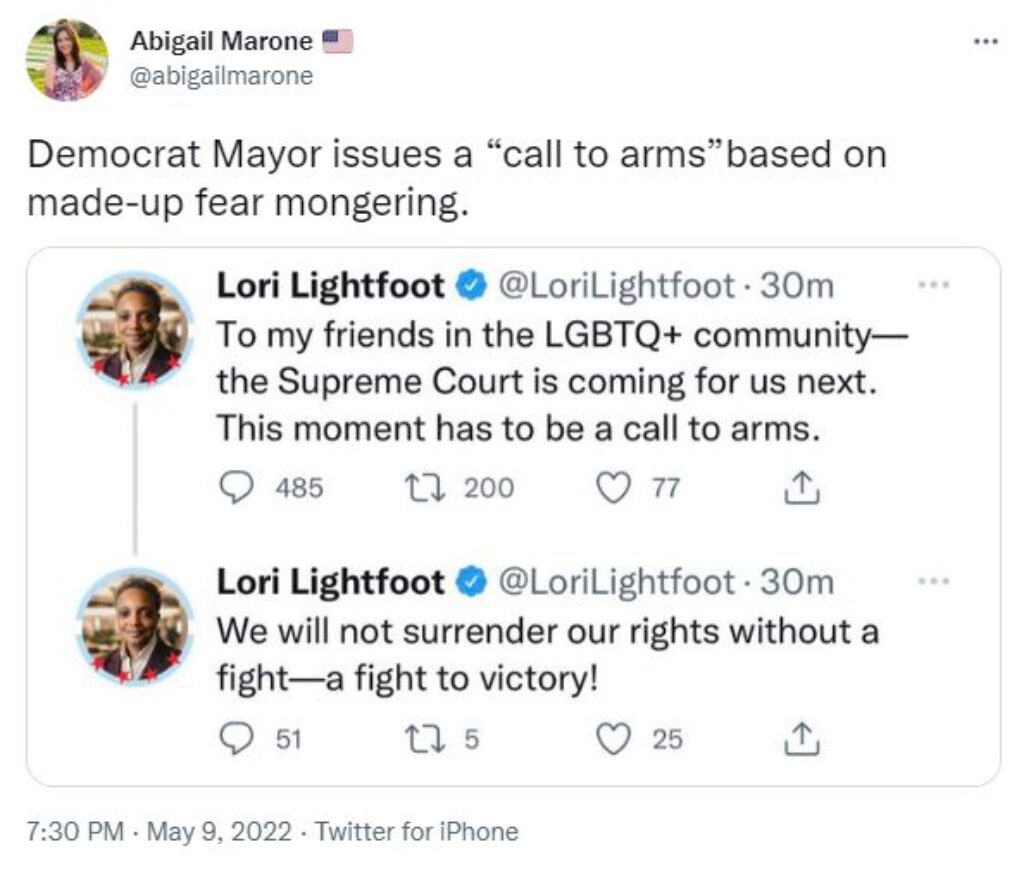 But the most concerning element in all this is the language used by Mayor Lightfoot – as “a call to arms” is quite literally defined as [2] “a summons to engage in active hostilities.”

Considering that just last year [3] former President Trump’s usage of the words “fight like hell” during a speech that preceded the incident at the Capitol were heavily scrutinized, so much so that it was included in the article of impeachment, Democrats have firmly established that words – whether figuratively used or not – matter.

In the weeks following the Capitol incident, numerous headlines were run [4] that accused the former president of inciting violence – again, based solely upon the aforementioned rhetoric.

If Trump belting out the figurative expression of “fight like hell” rings as inciting violence to those on the left, then what the Chicago mayor shared on social on May 9th is worthy of the same scrutiny [5], especially considering the language used not only incorporates “fight” twice but aims to foment of mob with the issued “call to arms.”

Furthermore, Mayor Lightfoot was also among those who accused former President Trump of having incited “violence” on January 6th, as she tweeted from her official office account that day, “I am in disbelief with what is unfolding in D.C. right now. President Trump and his enablers incited this violence. Shame on every elected official in Congress and elsewhere who fomented this anti-democratic insurrection by extremists. This is not democracy. This is a disgrace.” 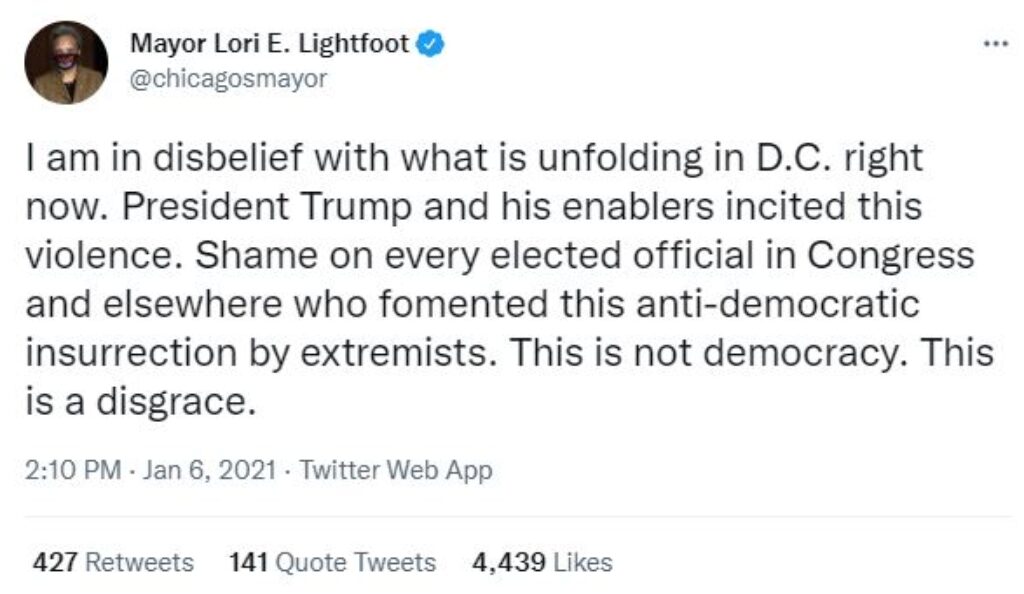 But unfortunately, Democrats won’t be holding Mayor Lightfoot’s feet to the proverbial fire – her party and constituents will act like it’s no big deal, claim she didn’t literally mean “fight” or “call to arms,” and then undoubtedly deflect by saying something about January 6th (ironically). And what’s all the more alarming is that Mayor Lightfoot is spreading this rhetoric while radicals are literally targeting Supreme Court justices’ homes and committing arson attacks against pro-life organizations.