"In the wake of the racist act of terror in Buffalo, New York will lead the charge to confront this epidemic head-on.”

Governor Hochul shared news of the effort on May 18th, taking to Twitter with claims that “social media platforms promoting violent extremism” need to be investigated. 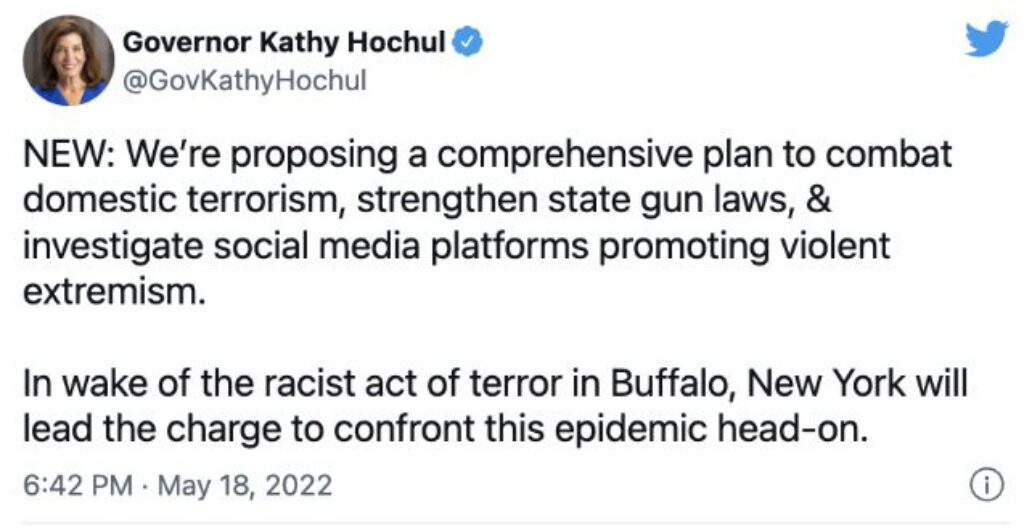 Red Voice Media previously reported on the horrific mass shooting that occurred on May 14th at the Tops Friendly Market, which has garnered significant national attention namely due to the onset of the mass shooting having been livestreamed through the online platform Twitch and a manifesto allegedly written by the suspect, identified as 18-year-old Payton Gendron.

MORE NEWS: Everything The Left Claims To Be Infuriated About 2020 Election, They Did in 2016 Only To A Higher Degree [VIDEOS]

And while there have been the expected calls from politicians and media outlets regarding things like gun control following the incident, a majority of the focus from news outlets and elected officials have revolved around the concept of ‘dangerous’ speech and methods to regulate it.

Much of the ire regarding the spreading of purportedly dangerous speech has been aimed at various Republican officials like Rep. Elise Stefanik and Fox News personality Tucker Carlson over assertions they and others have contributed to the mainstreaming of the “great replacement theory.” Said theory was peppered throughout the alleged manifesto linked to the mass shooting.

Governor Hochul issued an executive order on May 18th (which said executive order incorrectly notes the mass shooting occurred on March 14th instead of May) that instructs the New York State Police to establish this social media-centric unit tasked with monitoring online activity.

“The State Police shall establish a dedicated unit within the New York State Intelligence Center (NYSIC) to track domestic extremism and increase social media monitoring at the Intelligence Center. The unit will be responsible for developing investigative leads based on social media analyses focused on radical extremist activities motivated threats by identifying online locations and activities that facilitate radicalization and promote violent extremism.”

That same day, Governor Hochul wrote a letter to New York AG Letitia James, asking for her office to investigate online platforms like Twitch and 4chan to determine whether they “have civil or criminal liability” in connection with the Buffalo mass shooting.

“I am seeking your assistance to investigate the specific online platforms that were used to broadcast and amplify the acts and intentions of the mass shooting that took place in Buffalo on May 14, 2022 and determine whether specific companies have civil or criminal liability for their role in promoting, facilitating, or providing a platform to plan and promote violence.

The investigation should include, but not be limited to a review of those platforms that may have been used to stream, promote, or plan this tragedy, including but not limited to Twitch (owned by Amazon), 4chan, 8chan, and Discord.”

AG James has seemingly accepted the task gleefully, releasing a statement thereafter where she proclaimed her office is “taking serious action to investigate these companies for their roles in this attack.”

That’s how you spot the guilty By their opportunistic narcissistic predatory behaviours. Like cultures orca pack of wolves in sheep’s clothing And the bitches are the most vicious .

Have these morons never heard of the Constitution?

I’d think a putty knife might help removing all those layers of makeup.
Scary!!!

Hochul is a murderer, liar, thief and a BIG freaking fascist.

Now she’s going spend money that NY does not have to monitor hate speech on social media? She wants a takedown of free speech on Twitter, what little there is? There was no ‘hate crime’ specifically against the black population of Buffalo. The guy’s manifesto was clear about his messed-up concept of politics which included just about everyone. They were along Nazi lines like any good fascist, i.e. anyone who didn’t agree with him. That should sound familiar to you, Hochul being a rights denier yourself. Apparently, you and your fascist buddies who promote lockdowns, masks, store closings, the WEF/WHO, et al don’t promote truth at any level. There were two white people murdered, supposedly, as well. Apparently, she can’t read? Even so, she has no trouble repeating her lies of convenience to prove herself right when she is dead wrong. LIAR.

Bottom line—–BITE ME, Hochul. You are a superiorly creepy individual and way too stupid to have critical thinkers pay any attention to your ravings.

Everything The Left Claims To Be Infuriated About 2020 Election, They Did in 2016 Only To A Higher Degree [VIDEOS]