TUCSON, AZ – A 29-year-old high school counselor was arrested earlier in May after Tucson Police claimed she’d been sleeping with a 15-year-old student [1] from the high school. Furthermore, this same counselor was also one of the key organizers behind a drag show where high school students were scheduled to perform [2].

On May 11th, Tucson Police arrested 29-year-old Zobella Brazil Vinik under charges of sexual conduct with a minor regarding an alleged sexual relationship the suspected pedophile engaged in with a 15-year-old student at Tucson High Magnet School.

For the sake of context, Vinik was a counselor at the same school where the victim attended. However, the school placed Vinik on administrative leave on May 5th after school officials were alerted to an investigation into the suspected pedophile, with Vinik reportedly resigning the same day she was placed on leave.

Vinik’s ex-wife reportedly told police during the investigation that the 15-year-old victim had been staying in their home [3] for some time and further told police that Vinik and the victim had been sleeping in the same bed. Apparently, Vinik’s ex-wife claimed to have recently found some of Vinik’s underwear hidden underneath a pillow on the bed where the victim slept at night.

Vinik is currently booked at the Pima County Jail.

But what is of particular interest in the case of Vinik is that in the weeks leading up to her arrest, she was one of the key organizers [4] of the high school’s first drag show – one where high school students apparently performed in.

Vinik and her former colleague April Hamilton, a biological female who pretends to be male, unsurprisingly ran the school’s “Q Space” – a student club for “LGBTQ+” students. Under Vinik and Hamilton’s leadership, the duo began promoting the drag show through Instagram, highlighting the performance would take place on May 7th. 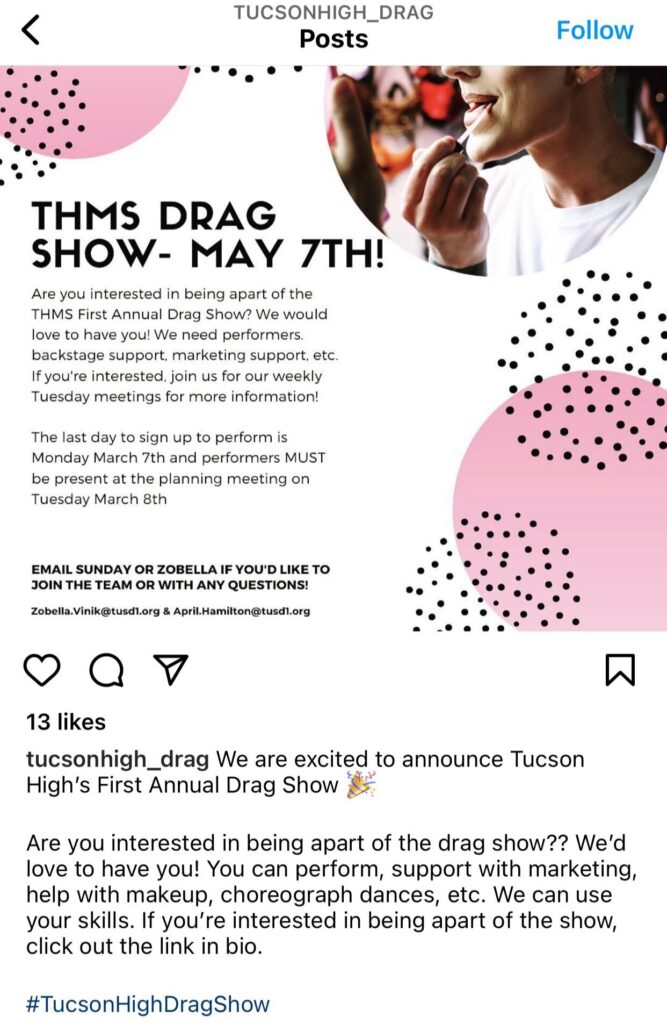 In an April 28th email sent by Vinik ostensibly to students and staff, she promoted the drag show that was titled “School is a Drag: A Badger Extravaganza” (for the sake of context, the Tucson High Magnet School mascot is a badger). Later on, in the same email, Vinik decries some of the pushback that the event was receiving, calling the criticisms of sexualizing young children in drag as being “homophobic and transphobic backlash.”

“While the support from staff and students has been overwhelming, we have experienced quite a bit of homophobic and transphobic backlash. We have been informed that there have been threats of a registered anti-LGBTQ hate group, Mass Resistance, being present, as well as other entities.” 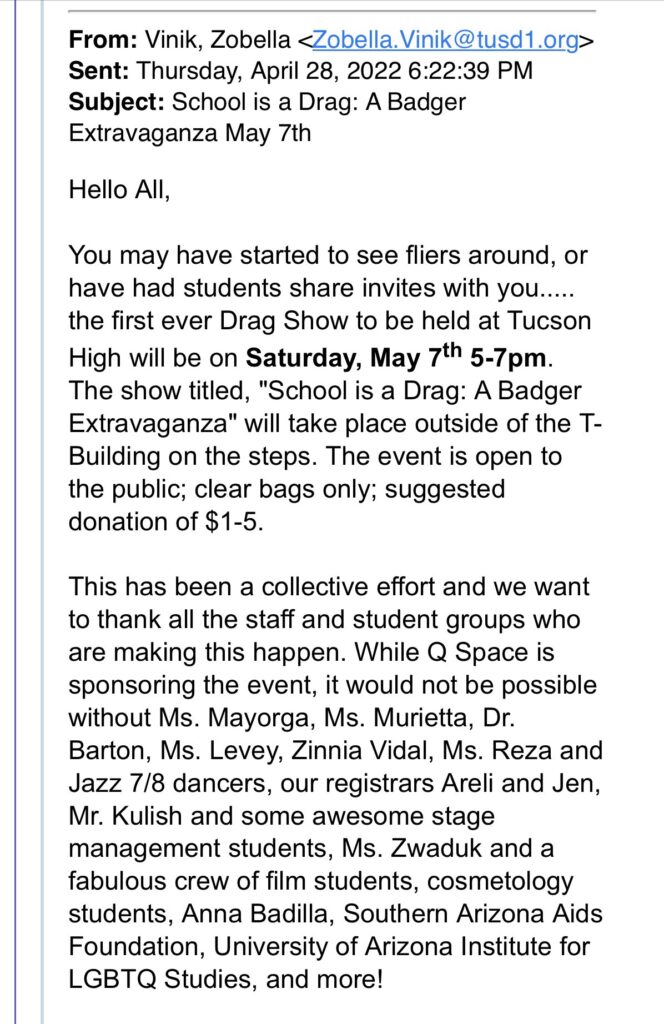 There’s currently nothing to indicate that the May 7th drag show at the high school was pulled despite the key organizer, Vinik, having already resigned from the school after they learned about the investigation into the suspected pedophile two days before the scheduled drag show.