Wait until you see their grades. Oh, wait...

SEATTLE, WA – According to reports, a high school located in Seattle asserts that approximately 80% of their students identify as “LGBTQ+, non-binary, and transgender” – a rather alarming statistic amidst an era where leftists and Democrats refute the notion that children are being groomed inside the classroom.

City Journal contributor Christopher Rufo shared the details of this perplexing statistic that came out of Nova High School in Seattle, writing on Twitter, “Nova High School in Seattle describes its pedagogical approach as ‘decentering whiteness, patriarchy, [and] hetero- and cis-normativity.’ 80 percent of its students identify as ‘LGBTQ+, non-binary, and transgender.’ The school does not issue grades.”

Rufo shared a screenshot from Nova High School’s mission statement featured on their website, which reads in part, “Through these cycles, we deconstruct systems of power and privilege and rebuild ourselves, our school, and our communities with different ways of being. By decentering whiteness, patriarchy, hetero- and cis-normativity, and able bodies, and by embracing neurodiversity, we are revisioning educational communities as spaces where students’ needs are met, growth is the metric that matters, and behavior is understood as a form of communication.” 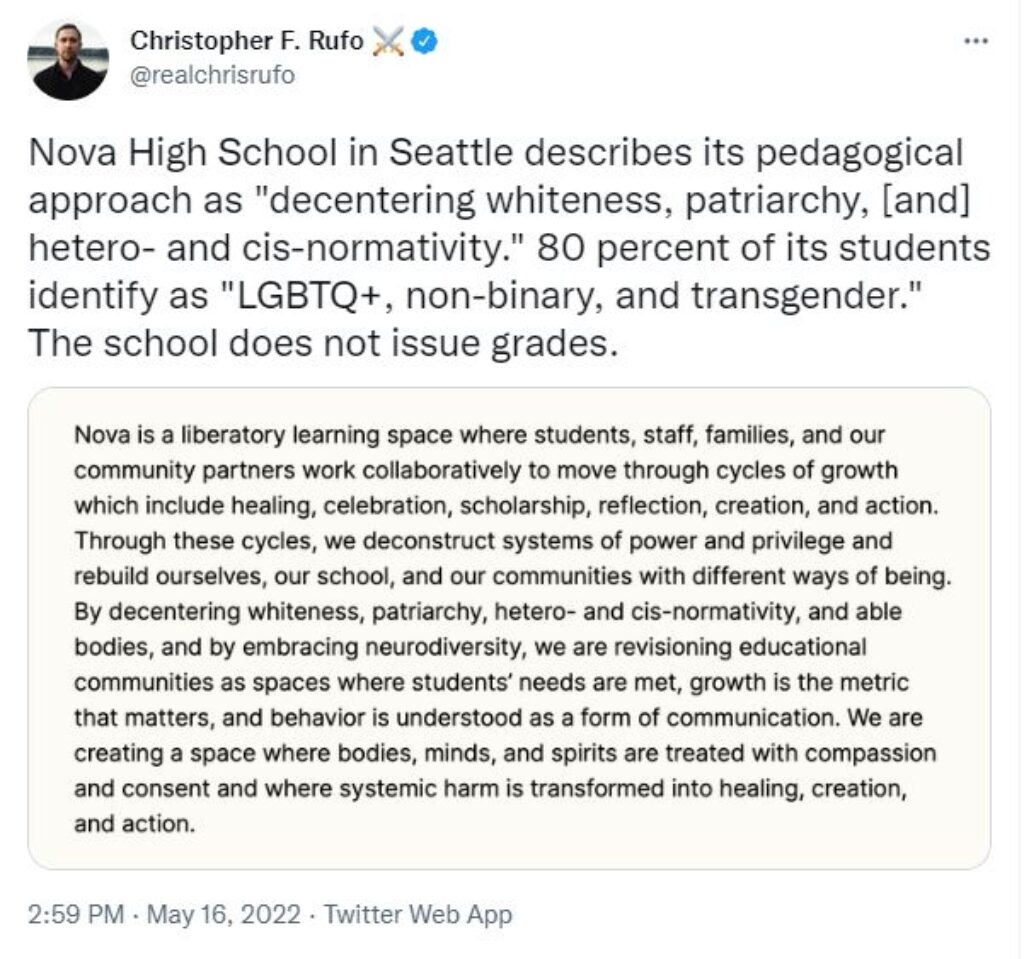 And in an unsurprising tidbit of information regarding this school, it turns out that the principal, Eyva Winet, happens to go by “they/them” pronouns, as that element regarding the principle’s self-identity is prominently featured on the school’s website. 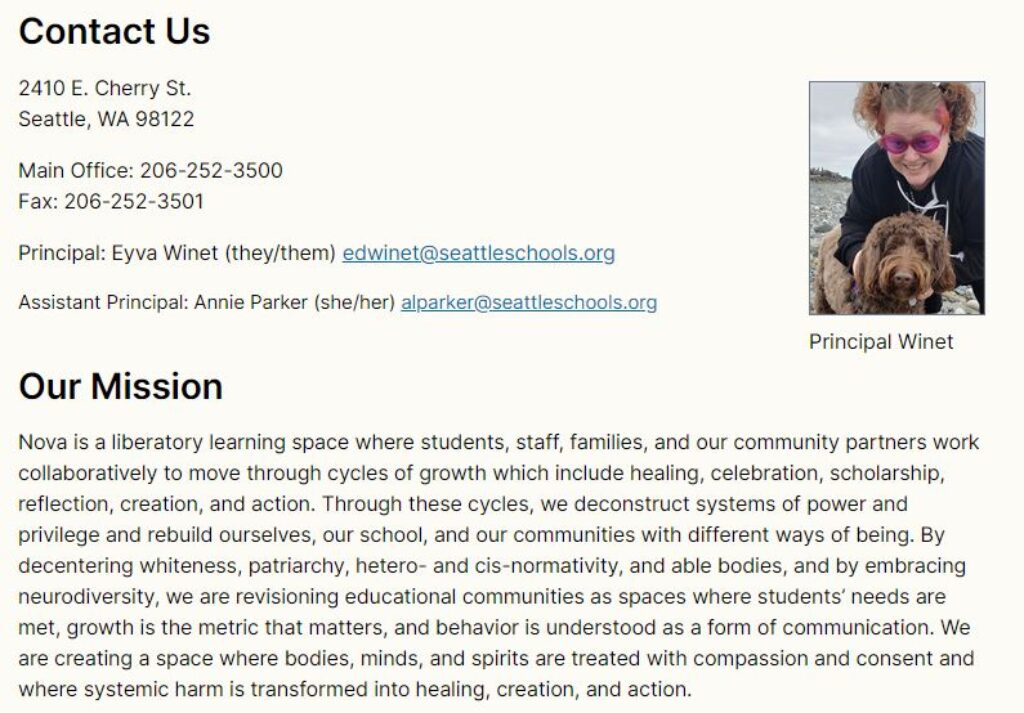 Rufo noted the peculiar “convergence” regarding this school’s embraced ideologies over the years and the impact that it has had on the current student body.

“It’s an interesting convergence of a few trends: it’s an alternative high school that’s had the hippie “self-governing” ethos since 1970; it’s all-in on social justice ideology as its moral and pedagogical system; and it’s a predominantly white LGBTQ/trans/nonbinary population.”

The City Journal contributor rhetorically asked, “I’m curious as to whether there’s another high school in the US with a higher rate of LGBTQ-identifying students. It’s at 80 percent, according to the district. Although, given the curriculum and pedagogy, it could be more of a political identifier than a sexual identifier.” 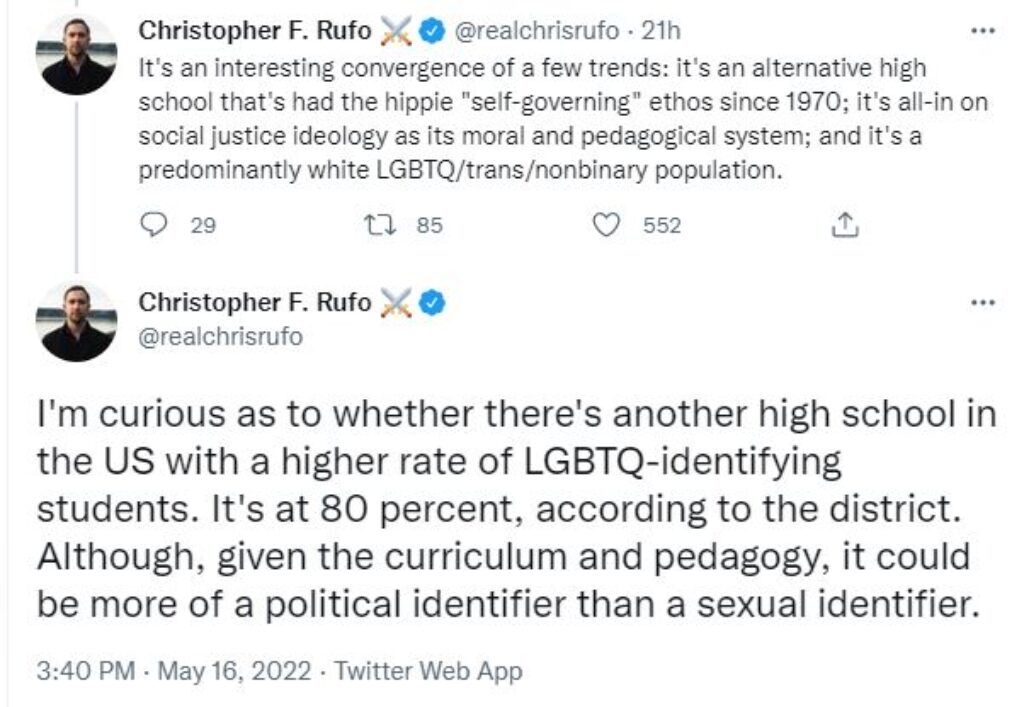 It’s hard not to look at a phenomenon regarding the student body at Nova High School overwhelmingly claiming an LGBTQ+ identity and wonder whether it is a byproduct of some grooming.

Of course, therein lies the possibility that this particular school is a magnet for those in the general area who already were embroiled in various identity crises. But impressionable children who are not already enveloped in the LGBTQ+ agenda being surrounded by peers already ensnared in the lifestyle could wind up being inadvertently swayed into it themselves.

Potentially a school environment rife with grooming from the top down, from the “they/them” principle to peers undoubtedly encouraging the agenda in tandem. Yet, Democrats and leftists alike again will work to gaslight the population into believing that no such grooming in the classroom exists.

What is wrong with the parents of these poor, brainwashed children who were once normal.
This isn’t a school; it’s an indoctrination camp.

I wonder how many of these students are saying how they identify just to say it and laugh. I believe it has been said that the teenager’s minds are not fully developed. Can’t wait to see what happens in the next few years.

Almost everyone’s sexual and as teens are basically seeking same sex role models They’re turned on by being young, Today they’re so narcissistic of course they’re as if homos.

Attorney Thomas Renz: “These Hospitals are Murdering People” and They Know It [VIDEO]