Conversations with kids about being transgender and non-binary...

A recently leaked internal email from State Farm shows the insurance company is pulling financial support for the entity GenderCool, an outfit the insurance company partnered up with to distribute LGBT-themed books to schools and libraries that would target children as young as kindergartners.

The debacle started on May 23rd after an internal email from State Farm regarding the established partnership with GenderCool wound up being leaked to the nonprofit Consumers’ Research.

The NPO’s executive director, Will Hild, took to Twitter to share the January 18th email sent out to State Farm agents in Florida asking to participate in the GenderCool effort.

“To Florida agents, State Farm is partnering with The GenderCool Project to help diversify classroom, community center and library bookshelves with a collection of books to help bring clarity and understanding to the national conversation about Being Transgender, Inclusive and Non-Binary. The project’s goal is to increase representation of LGBTQ+ books and support our communities in having challenging, important and empowering conversations with children age 5+.” 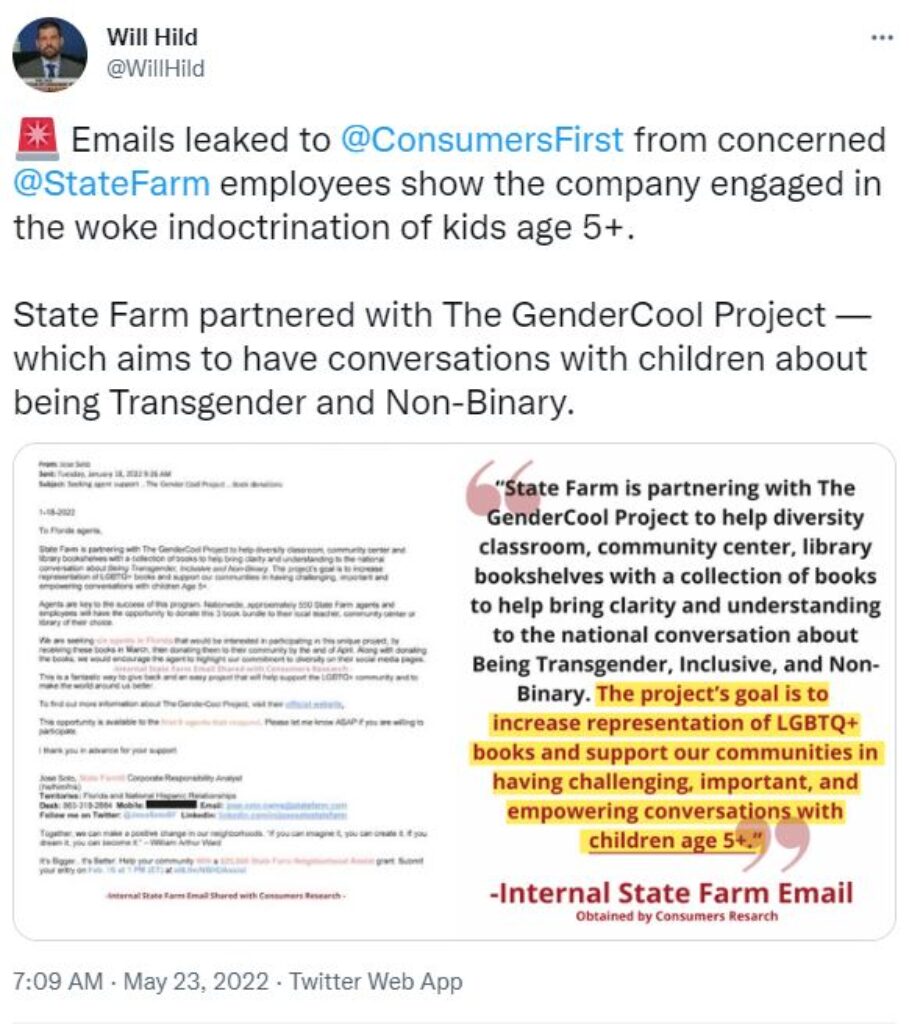 Hild also shared screenshots of some of the books that State Farm agents were given to deliver to their local schools and libraries – again, with these books meant to target children as young as age five.

“[State Farm’s] goal was to have ‘550 agents and employees’ nationwide donate a 3-book bundle about Being Transgender, Inclusive and Non-Binary to their ‘local teacher, community center or library of their choice.’ We’ve obtained screenshots of the books and…it’s bad.” 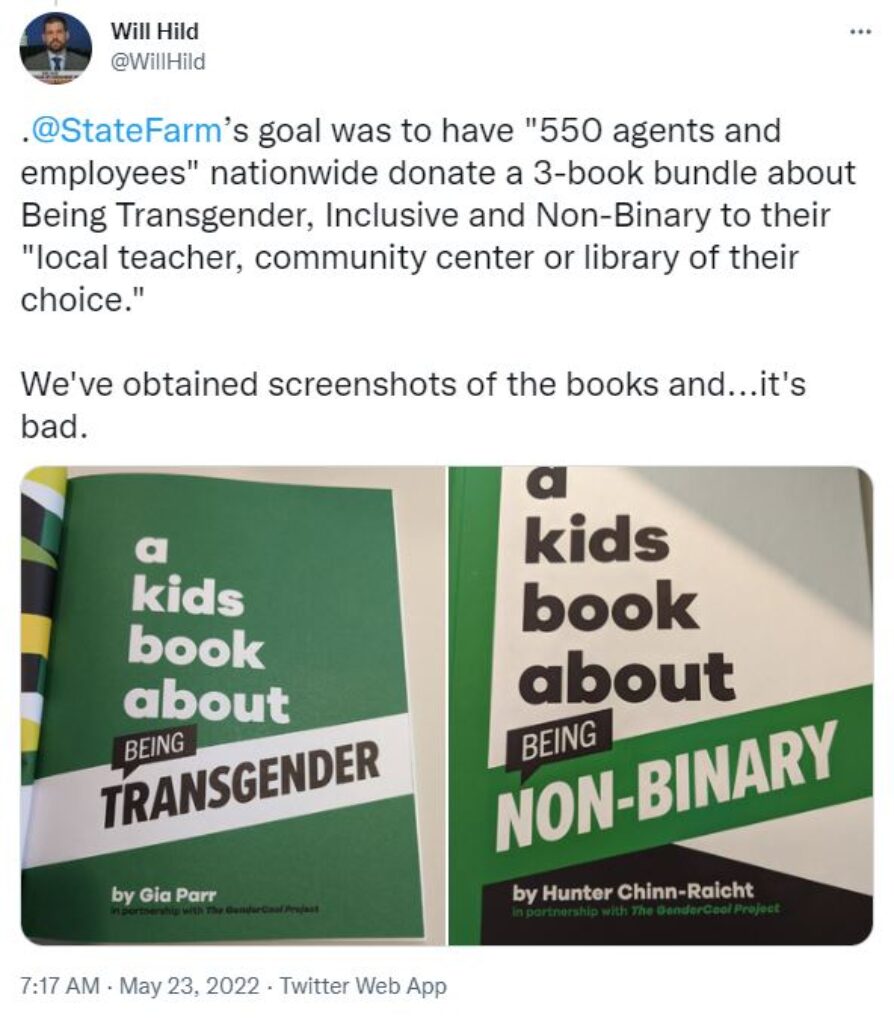 The contents of the books are rightfully concerning, as they pushed the notion that every child should begin to question their gender identity and fathom adopting different pronouns that are at odds with their biological sex. 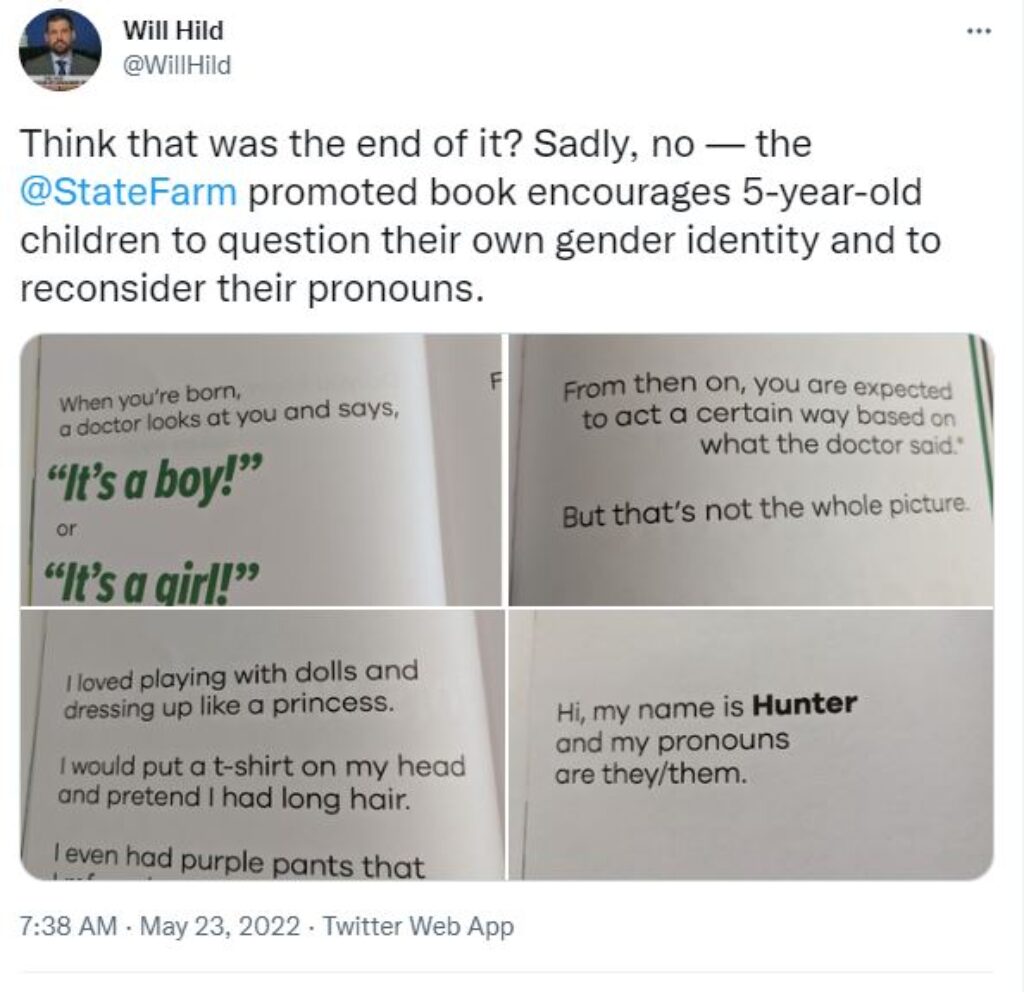 The same day the news broke about State Farm’s funding of and active participation in this youth grooming endeavor, the company’s vice president of public affairs/chief diversity officer, Victor Terry, sent out an email to all the agents informing them that they are yanking support from GenderCool in light of the negative press.

“State Farm’s support of a philanthropic program, GenderCool, has been the subject of news and customer inquiries. This program that included books about gender identity was intended to promote inclusivity.

“Conversations about gender and gender identity should happen at home with parents. We don’t support required curriculum in schools on this topic. We support organizations providing resources for parents to have these conversations. We will no longer support that program. We will continue to explore how we can support organizations that provide tools and resources that align with our commitment to diversity and inclusion.” 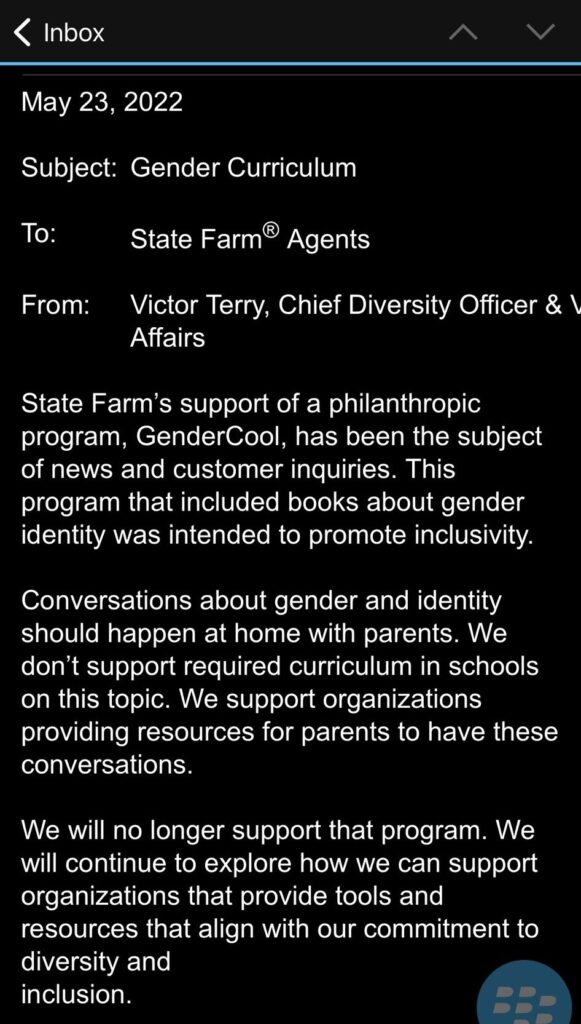 The Twitter account Libs of TikTok shared the leaked email announcing State Farm’s distancing from GenderCool, but some within the comments section of the post pointed out that State Farm isn’t really reversing course on the matter, as they admit in the email that they’ll “continue to explore how” they can partner with these sorts of outfits.

Libs of TikTok addressed that aspect, noting how they have contact with a handful of State Farm employees who will gladly blow the whistle if something awry as the GenderCool effort crops up again.

“The good news is I now have at least 3 StateFarm employees who will keep me updated if anything changes. And I know others have their own sources within [State Farm]. They’re being closely watched.”

the question is why do these companies think they should be sticking their nose in politics?

Guess I need a new insurance company too……

I hope every State Farm customer who understands that there are only two genders, will switch to another provider; one who is only in business to provide insurance coverage. If a company chooses to go against what God established, they don’t deserve to stay in business. These mentally deranged humans never learn from others, who have implemented the same sickening policies and reaped the consequences!

I vote they spend that money on actual insurance claims and stick to providing what their customers pay for.

To say that they are sorry and to pull future support is not enough. The same amount of money/number of books that were donated via GenderCool, needs to be given by State Farm for the purchase of books that promote traditional boy/girl. . . dare I say, penis/vagina identification and acceptance. Perhaps even the Matt Walsh book, “Johnny the Walrus”.