Target is aiding in the de facto grooming of confused young children.

According to reports, retail outlet Target is catering to the transgender ideology again this upcoming June with a clothing line consisting of “chest binders” and “packing underwear” – which said articles of clothing are meant to affirm the delusions held by self-proclaimed transgenders.

For those unaware of what chest binders or packing underwear are, they’re specifically undergarments marketed towards biological women who are attempting to present themselves as bearing more masculine/male physical characteristics.

Specifically, chest binders are meant to compress a woman’s breasts to an extent where they either look considerably less pronounced or are practically undetectable when worn under layered clothing.

Packing underwear takes things considerably further in the realm of affirming delusions, as they’re a specially designed type of underwear that host a pouch where women can insert a “packer” meant to simulate the appearance of a groin bulge.

Basically, these two types of undergarments encourage and embolden the symptoms of gender dysphoria – and they’re now going to be available at Target come this June and undoubtedly be presented in sections of the store geared toward young women and girls.

Bustle, an online outlet primarily focused on women’s fashion, noted, “Target partnered with TomboyX and Humankind — two queer-owned, female-founded brands — to create these much-needed lines,” where these undergarments will be available in sizes small through 4X, thereby essentially confirming that they’ll be marketed in part to young women and girls.

And if that weren’t enough evidence that Target is aiding in the de facto grooming of confused young girls, Bustle further reported that “Target reps have confirmed that this collection marks the first time the retailer has stocked compression tops in stores — a huge move for queer youth who don’t have access to gender-affirming products.”

The pro-grooming crowd are already celebrating the upcoming release of the products on Twitter, with one individual championing how “discreet” the undergarments are and could easily be mistaken for “a sports bra.”

“TomboyX is collabing with Target to put out discreet half binders in stores for Pride season. These will be moderate compression without a lot of branding, so it will look like a sports bra to those not used to seeing binders.

“A great option for young people who may be figuring things out, for cosplayers, and men with gynaecomastia and uncomfortable with how they look. Ladies and theydies with bigger chests won’t be totally flat, but it gives you an easier silhouette to improve on. Spread this information as you will.” 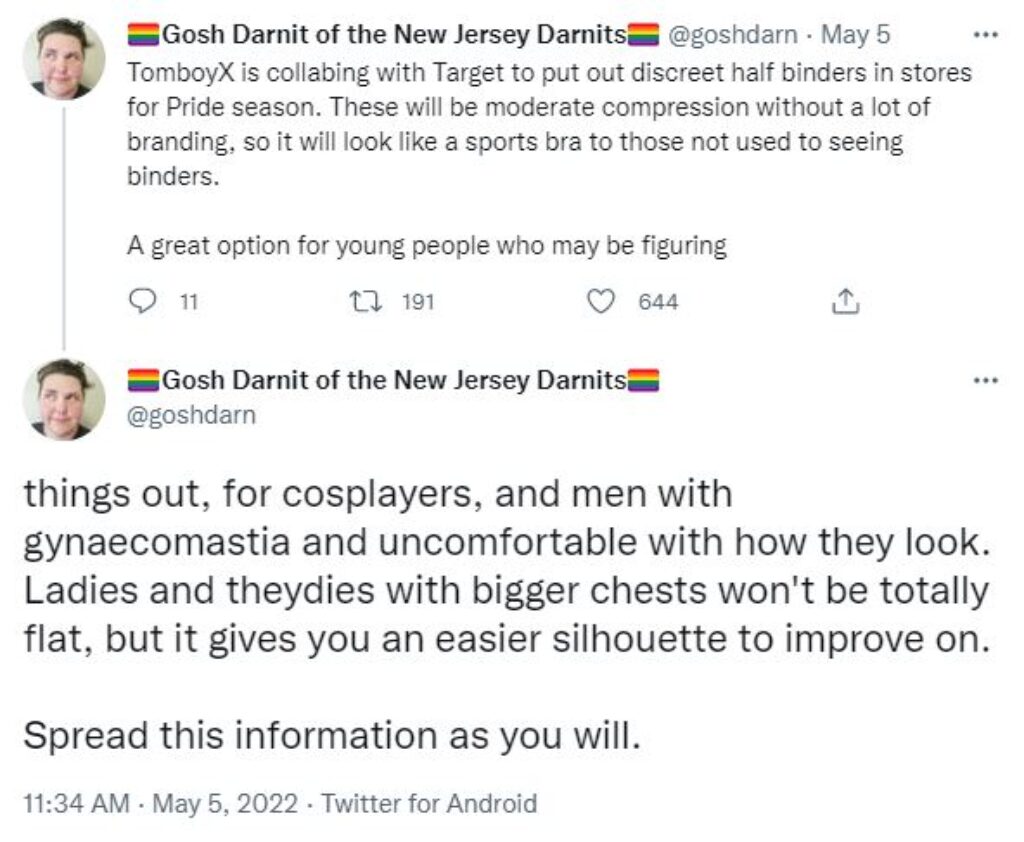 Target is part and parcel of the movement to normalize the idea of destructive body modification in tandem with indoctrinating the youth into transgender ideology, and the groomers are openly celebrating the thought that more children will be inducted into their degenerate lifestyles.

I was just in Target today (a rare occurrence, indeed), and it felt queerer than usual. Now I know why.

Trans people will make big pharma zillionaires. Profit is their motivation. They will always be needing touch up cosmetic surgeries and hormones and counselling and support And I’m certain the rejection their bodies will have to implants of breasts and the rest will lead to massive sickness and disease raking in squilluons

Ever since their first asshole decision I have and will continue to BOYCOTT this store. I am tired of IDIOTS telling me what to do, think, act, I make up my own mind and accept or reject things/persons as I feel fit.

And that is why I don’t shop at Target. That comment about “If you see a bulge in a conservative women’s pants”… Says the SHEMALE michelle obama. Thank you RVM for free speech!

It’s BS how people in power want to influence their sexual choices on the public. It’s becoming apparent Putin was right. When he stated America was ran by a bunch of pedophiles.

Dark s°tar Target is getting st°icky as toXic tar gets. . . Hence, I suspect said tr°icky emporium will be targetted for its tar being thrust in-y°our face! This ill-begotten scheme’s been essentially concocted by debased groomers’n other accosters’n costumers! Knowing the true agenda behind so peculiar a marketing ploy will merely leave said transhumanist sh°ills with egg on their gloom’n doom boomer faces’n other spaces! Hence, the despicable NWØ hype-type creeple such as Gat€s, Harari’n Shwab, et alia, can all summarily simply W€F-ØFF. . . Pfffft! ⚡️☝️⚡️