UVALDE, TX – On May 25th, Texas Governor Greg Abbott informed members of the press that the deceased 18-year-old school shooter had forewarned of the shooting [1] roughly 15 minutes prior to the massacre via Facebook.

Meta’s communications director did confirm the shooter using Facebook to forewarn of the planned shooting but highlighted that the shooter did so through private messages [2] rather than Facebook posts.

In the third and final message, sent out approximately 15 minutes before the mass shooting, Ramos wrote, “I’m going to shoot an elementary school.”

During this press conference, Governor Abbott claimed the aforementioned messages were “posted” to Facebook, and that notion began to get repeated on social media by various reporters.

Brandon Wall of Buzzfeed was among those to spread the abovementioned, which was when Meta communications director Andy Stone clarified these writings by the deceased gunman were contained in “private” messages.

“The messages Gov. Abbott described were private one-to-one text messages that were discovered after the terrible tragedy occurred. We are closely cooperating with law enforcement in their ongoing investigation.” 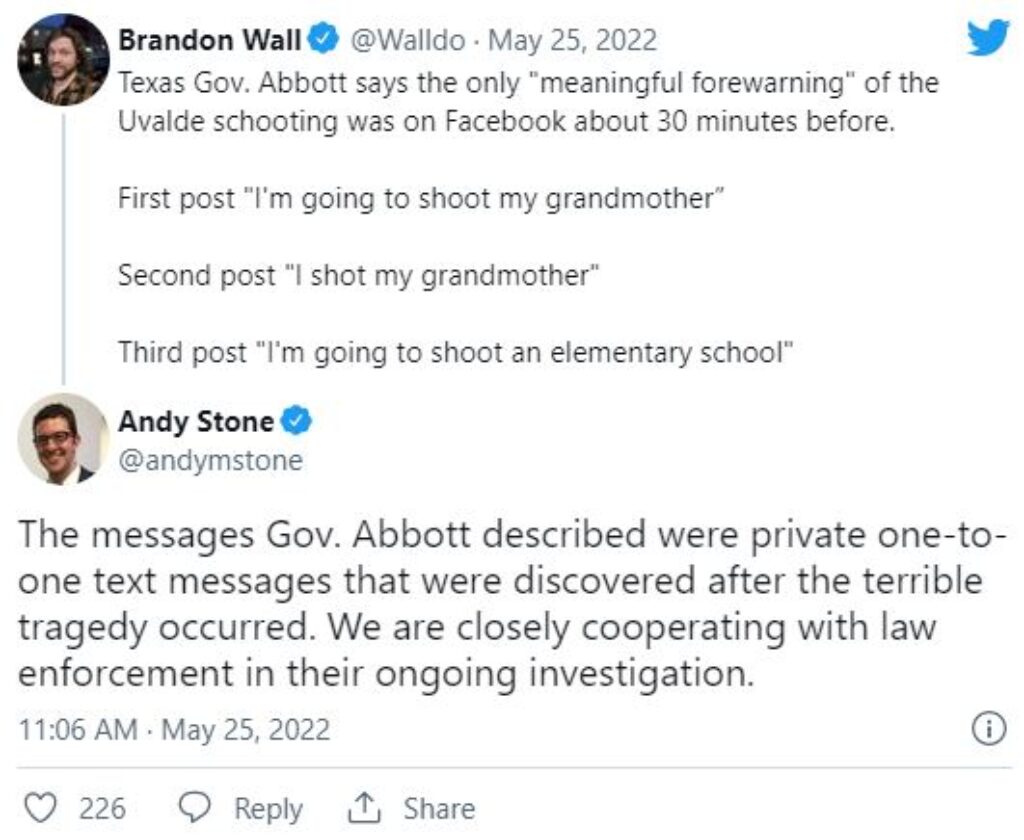 As it stands, most officials who’ve commented on this case have offered no other likely explanation/motive to the shooting other than potential undiagnosed mental health issues present within the deceased gunman, which Governor Abbott addressed during the press conference.

However, those assertions are only speculative as of this time.

What is known about the gunman was that he was 18-years-old, a reported high school dropout, and seemingly bore no criminal history nor reported issues regarding his mental health.

Ramos had purchased his first firearm [3] on May 17th from an FFL based out of the Uvalde area, then purchased approximately 375 rounds of ammunition the following day. Come May 20th, Ramos had reportedly purchased a second firearm.

On May 20th, an Instagram account authorities say belonged to the shooter hosted a post containing a photo of both of the firearms purchased by Ramos. The shooter had apparently tagged another Instagram user who had more than 10,000 followers on the platform, asking the woman to share the picture with her followers.

The aforementioned Instagram account holder had replied to Ramos’ post, writing, “I barely know you and u tag me in a picture with some guns.” On the morning of the shooting, Ramos had replied to her comment simply with, “I’m about to.”

Authorities are actively investigating other social media accounts that may be linked to Ramos, such as a TikTok account where the profile reads, “Kids be scared IRL.”

Rolando Reyes, Ramos’ 74-year-old grandfather, told ABC News [4] that he was completely oblivious to his grandson purchasing both of the firearms. Reyes is reportedly a convicted felon and thus barred from having firearms in his home and says he would’ve turned his grandson into police had he known about the weapons.

Reyes admitted that his grandson had some sort of a minor argument with Ramos’ grandmother about a phone bill, but there was nothing seemingly out of the ordinary that alerted him that Ramos was planning anything to this effect.

When Ramos shot his grandmother, Reyes wasn’t home at the time, but was contacted by a neighbor about his wife being shot. By the time Reyes arrived back home, Ramos was already gone, having fled the home in his grandmother’s vehicle.