UVALDE, TX – Just over two months prior to the horrific mass shooting that left 19 people and two adults dead at Robb Elementary School, the Uvalde Police Department conducted active shooter training with several of its officers. On top of that, the Uvalde School District was a part of an artificial intelligence program that was designed to help officials identify potential threats.

The school district participated in an active shooter training that was apparently being done in many districts in the area. The department shared several images of the training, including the role players, many of whom were high school students laying on the ground pretending to be dead people.

“Our overall goal,” the department posted on its Facebook page [1] on March 22, “is to train every Uvalde area law enforcement officer so that we can prepare as best as possible for any situation that may arise. We have hosted several of these courses and plan to continue to do so. I would like to thank UCISD Officers Adrian Gonzales, Ruben Ruiz and UCISD Lieutenant Mike Hernandez for instructing the course. Additionally, we would like to thank Dr. Harrell and Mr. Mueller for supporting our plans to keep our children and staff safe. Great job to everyone!!” 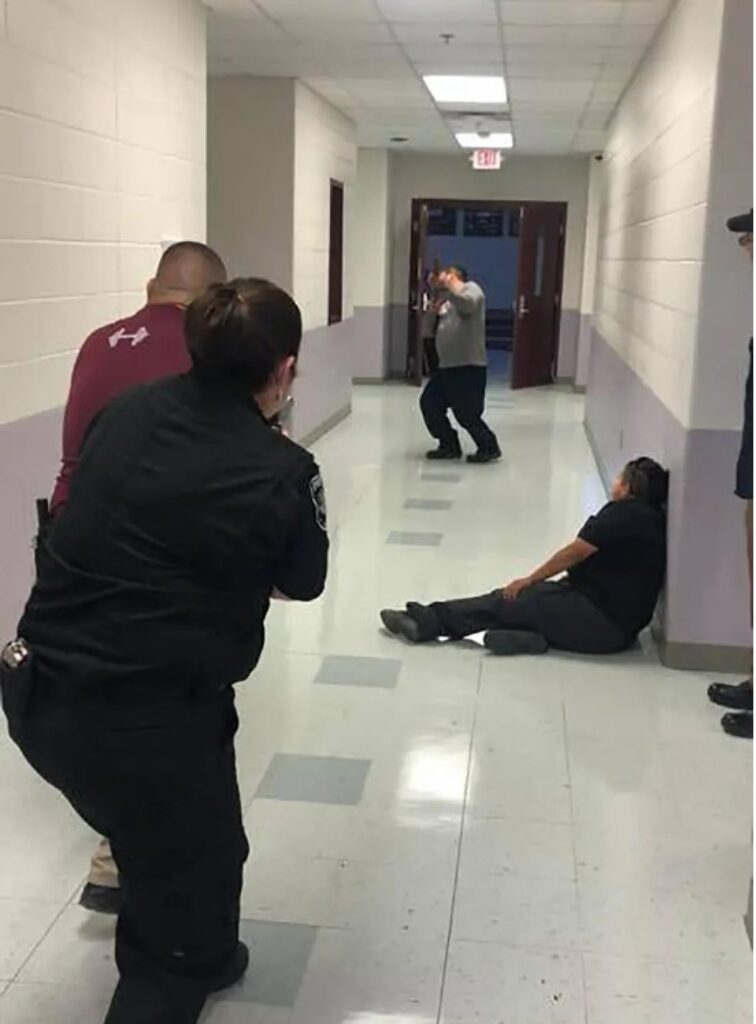 Ruben Ruiz, mentioned in the post, is a 16-year veteran of the department. He’s also the husband of fourth-grade teacher Eva Mireles, who died in the shooting.

Despite this active shooter training, police reportedly overwhelmingly underreacted during this incident, being more forceful with fearful parents [2] than the murderer himself.

Now, comments have flooded the post with people asking what happened to that training when the actual incident occurred, and others calling the shooting a false flag event. (False flag event does not mean that the event did not happen, it means that it’s an incident that was likely known about by authorities and allowed to happen anyway to push a specific narrative, such as gun control in this event.)

Further, it’s been discovered [3] that officials from the school district were monitoring students’ social media accounts via an “advanced AI-based service,” Social Sentinel [4] (part of the company Navigate 360 [5]), software that was reportedly purchased [6] by the district several years ago.

The point of the software is supposedly to recognize “signals of potential harm found in digital conversations.” Navigate 360’s website says their products are made for “student harm prevention solutions that work better together.” Also on their website prominently shown is information about how the company promotes social-emotional learning [7] (a Critical Race Theory buzzword).

After explaining that Navigate 360 curriculum “provides crucial character development and restorative curriculum to students of all ages, genders and cultures,” a question is posited: “How can schools benefit from restorative justice practices versus purely punitive measures?”

Clearly, 19 students, two adults, and every single family in the Uvalde school district did not benefit from “restorative justice practices” offered by the school. While we can’t know the extent of the record of the murderer, Salvador Ramos, because he was only an adult for a couple of weeks before the incident, Texas House Representative Tony Gonzales offered at least a glimpse [8] of Ramos’ past on Friday.

“The shooter was arrested years ago,” he said, “four years ago, for having this plan for basically saying, for saying, you know, when I’m a senior in 2022, I am going to shoot up a school.”

That means that Ramos was known to the school district, especially since he was reportedly a high school drop out and was bullied for a stutter and for wearing eyeliner, according to [9] a childhood friend, and posted random photos of himself with AR-style rifles and magazines on his lap.

It’s unclear what the parameters are for Social Sentinel to actually alert someone to a potentially dangerous post, but one would think that a recent high school dropout with a history of violent threats posting photos of himself with firearms might make the cut.

“Never before has it been more important to pay attention to the digital signals that indicate harm to your students,” Navigate 360 writes [5] on its page advertising its digital detection product.

Red Voice Media was unable to get through to Navigate 360 via telephone, and an email was not responded to by the time of this writing.