What Did The FBI Know And When Did They Know It? – Fed. Gov. Violence Against American Citizens [VIDEO]

It's happened more than most are aware...

UVALDE, TX – Following the shooting at Robb Elementary School where 19 children and two staff members were shot and killed, information regarding the incident, and the weeks prior, has started to come to light.

As Red Voice Media previously reported, parents on scene have began questioning why they were seemingly treated with more hostility that the 18-year-old murderer, Salvador Ramos. While the United States Marshals issued a statement to the contrary, a parent can be seen in the video below being tackled by police as he attempted to take custody of his daughter from the evacuation busses.

One mother claimed that she was placed in handcuffs by the Marshals for “interfering with an active investigation” while she pleaded for the police to “do something” about the shooter. The same mother said she saw another parent get pepper sprayed.

A grandfather, Bob Estrada, who lives across the street from the school said that he couldn’t figure out why the police weren’t taking action. He said, “They are trying to cover something up. I think the cops were waiting for backup because they didn’t want to go into the school.”

While mainstream media reports that Ramos had no criminal record, House Representative Tony Gonzales said that is untrue. According to Gonzales, Ramos was actually arrested four years ago for threatening to shoot up a school. “The shooter was arrested years ago,” he said, “four years ago, for having this plan for basically saying, for saying, you know, when I’m a senior in 2022, I am going to shoot up a school.”

In light of this information, it’s more likely that Ramos did in fact have a criminal record, but it was a juvenile record and therefore not made available because he turned 18 in mid-May.

It’s also been discovered that Uvalde school district officials were monitoring the social media accounts of students, with the express purpose, they said, of being able “to monitor all social media with a connection to Uvalde as a measure to identify any possible threats that might be made against students and or staff within the school district.”

So why, then, wasn’t posts made by Ramos (who is described as a “loner” who was “bullied”) which included an AR firearm on his lap flagged and investigated? Granted, if it had just been an image of an 18-year-old student with a firearm, that wouldn’t be concerning. But the totality of the information available should have sounded the alarm.

While there is currently no known answer to that question, it appears to be a theme developing regarding authorities having prior information on dangerous people who end up being murderers. 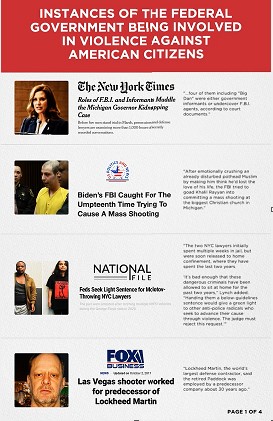 In the allegedly racially-motivated Buffalo grocery shooting where 10 people were killed, an investigation is underway to determine whether a retired FBI agent had at least 30 minutes advanced notice of the situation about to take place. The agent is reportedly from Texas, and is one of at least six other people who had regular communication with Payton Gendron.

The communication was held in online chat rooms where the participants discussed “racist hatred.” Reportedly, Gendron invited the former agent and about 14 other people into a private chat room to read his plans of the shooting, as well as the possible target location, about 30 minutes before he went on his rampage. Those people were also sent the link to watch his live streaming of the mass murder. It’s unclear whether the agent did, in fact, read the details and watch the incident unfold.

Two law enforcement officials close to the investigation told Buffalo News, “These were like-minded people who used this chat group to talk about their shared interests in racial hatred, replacement theory and hatred of anyone who is Jewish, a person of color or not of European ancestry. What is especially upsetting is that these six people received advanced notice of the Buffalo shooting, about 30 minutes before it happened.” 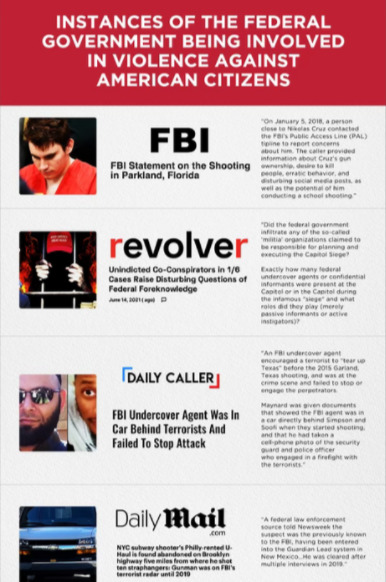 Other instances, too, of federal agents possibly being involved in some of our nations most shocking events have cropped up in recent years, leaving many to wonder how they can trust their law enforcement at the federal level.

Red Voice Media reported extensively on the plot to kidnap Michigan Governor Gretchen Whitmer, which turned out to be a plot that was fueled by an “invested conspiracy” by none other than active FBI agents. These agents goaded American citizens into bringing their anger over Covid-19 restrictions to a level of extreme criminal activity.

Then there’s the so-called “insurrection” at the Capitol on January 6, 2021, where it’s been confirmed that federal agents were at, exciting the crowd and pushing towards entry into the building. These same agents were given a shoot-to-kill command, and also reportedly handed out firearms prior to the event.

MORE NEWS: Gutfeld: Liz Cheney Is ‘Nuts’: ‘She Has This Grandiose View of Herself…It’s Embarrassing for Her’

In the 2018 Parkland high school shooting, the FBI was given advanced notice via a tip line that the murderer, Nikolas Cruz, was a potential threat to public safety. According to the FBI at the time, “The caller provided information about Cruz’s gun ownership, desire to kill people, erratic behavior, and disturbing social media posts, as well as the potential of him conducting a school shooting.

Obviously, those protocols were not followed, and the end result, as we all now know, was the shooting death of 17 people.

With all these instances of FBI agents either being complicit in or not properly stopping domestic terrorists, one can’t help but question, what is the real purpose of these federal agents?

I won’t believe anybody died at these FEMA drills until I start seeing covered stretchers being rolled out.

I won’t believe until they answer questions that should be addressed / or debunk us- if it’s not true – tell us . but they don’t seem to
be able to ….

Peyton Gendron whose case has been swept aside now, and whose name erased,sso sswiftly from the publics mind, had a retired FBI agent as one of his last contacts. That’s been proven and is being “investigated” by authorities.