And the Tweet from 2 days ago is still up. Somebody call Scary Poppins.

Is it the old adage of the broken clock being right twice a day, or is CNN making the transition – albeit slowly – to becoming a somewhat credible news source? A clip featuring Jake Tapper and Anthony Fauci talking about a recent piece of misinformation coming from the White House suggests, at the very least, that the Biden administration is running out of free passes from the mainstream media.

The misinformation in question came via the official Twitter account for the White House, where there was a claim that the COVID shots were not available to the public until after Biden entered office in January of 2021.

“When President Biden took office, millions were unemployed, and there was no vaccine available. In the last 15 months, the economy has created 8.3M jobs, and the unemployment rate stands at 3.6% — the fastest decline in unemployment to start a President’s term ever recorded.” 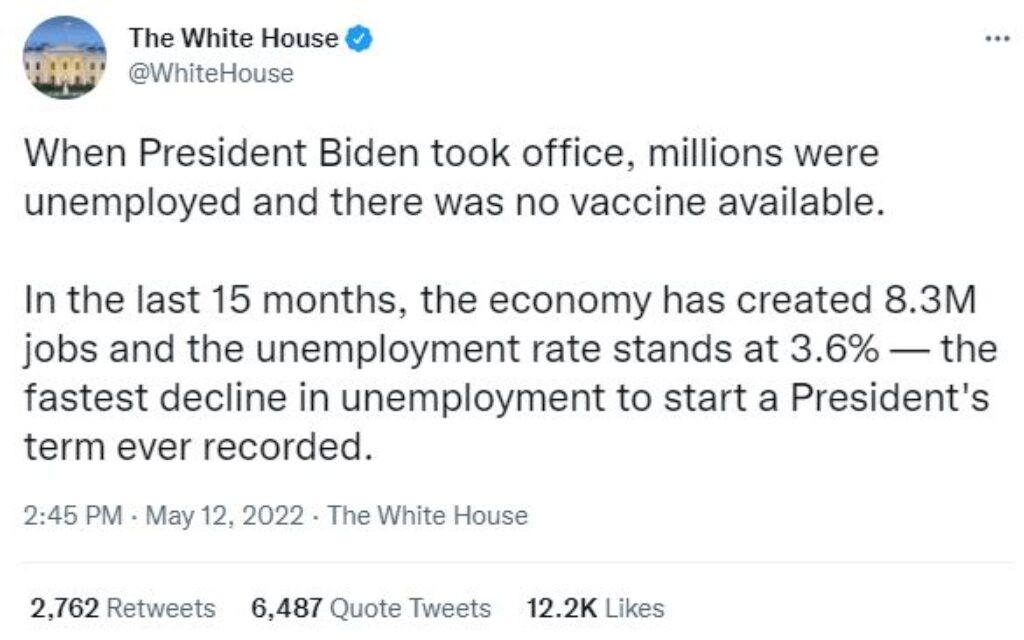 Obviously, that is an outright lie coming from the Biden administration.

As shown in a December 2020 press release from the FDA, an emergency use authorization was issued for Pfizer’s COVID shot. Furthermore, Biden had received his first of the two shots on December 21st, 2020, and nabbed his second shot on January 11th, 2021. For the sake of context, Biden didn’t begin his term as president until January 20th, 2021.

CNN’s Jake Tapper brought up the blatant misinformation coming from the White House while Fauci was making an appearance on his program, asking Fauci why the administration would outright publish this falsehood.

“As you know, that’s not true. There was a vaccine available – it may not have been widely available – but it was available. CNN fact-checker Daniel Dale points out that more than 3 million Americans had been fully vaccinated, more than 18 million had at least one shot by Inauguration Day. I think President Biden, then-President-elect Biden, had two shots by then. You’re the president’s chief medical advisor. Why is the White House politicizing the pandemic by tweeting out that there was no vaccine available until Joe Biden became president? It’s not true.”

Even Fauci couldn’t produce an answer as to why the Biden administration would put out such an easily debunked piece of misinformation, saying, “You know Jake, I’m sorry, I can’t explain every tweet that comes out…so you’re talking to the wrong person. I wasn’t involved in the tweet. I just can’t explain it, sorry.”

Tapper persisted still, responding with, “I know you can’t explain it, but certainly you would agree that it’s important to have facts when it comes to assertions being made about the vaccine, whether it’s from the Trump White House or the Biden White House. And certainly, you would agree that there was a vaccine available before Joe Biden became president.”

Fauci conceded that the statement from the White House was nonsense, saying, “Yeah, of course. I mean, he got vaccinated, and others got vaccinated. So, I think from a pure accuracy, that’s not a correct statement. But I mean, it just went out, I’m sorry. There’s nothing I can do about it.”

MORE NEWS: Heroic Off Duty Officer, With His Barber’s Shotgun, Ran Into Uvalde School Massacre To Save Kid’s Lives [VIDEOS]

On May 13th, the official Twitter account for the White House issued a follow-up statement addressing that they’d been called out for propagating falsehoods – claiming what they really meant was that the COVID shots were not yet “widely available” when Biden took office.

“We previously misstated that vaccines were unavailable in January 2021. We should have said that they were not widely available. Vaccines became available shortly before the President came into office. Since then, he’s responsible for fully vaccinating over 200 million people.” 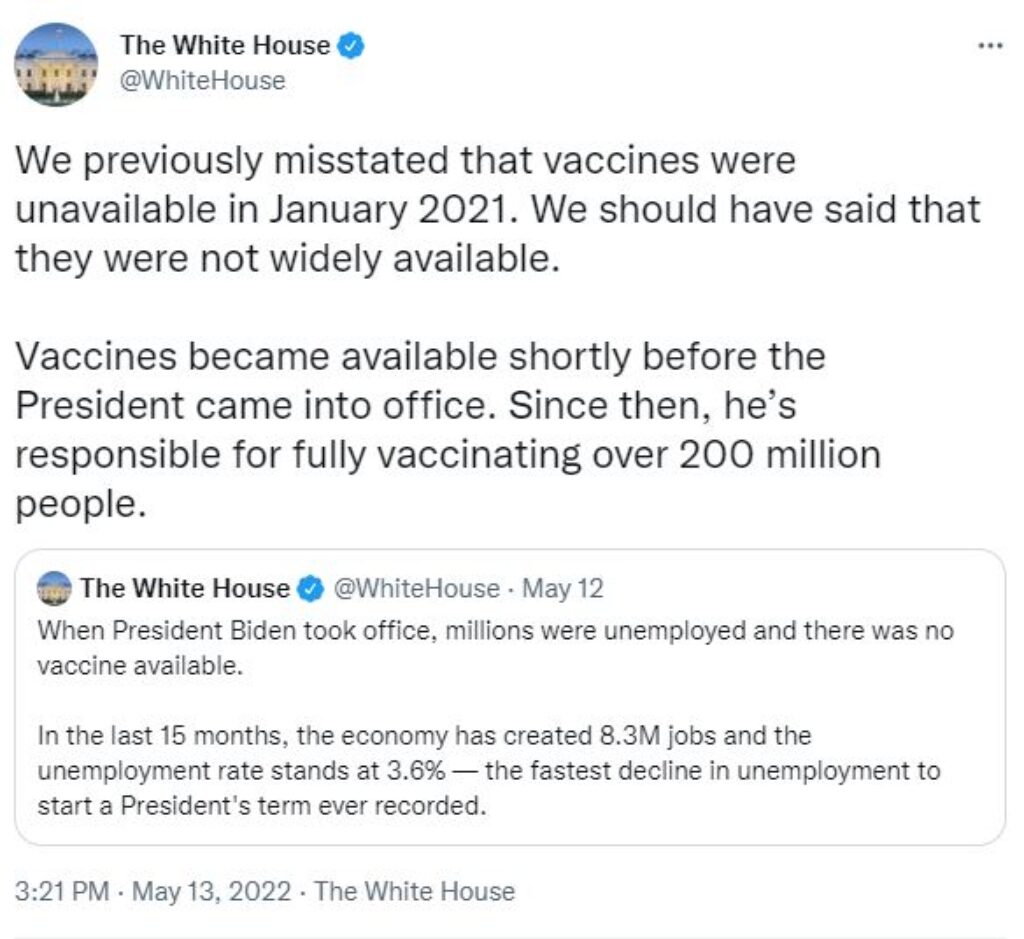 For once Dr. Franken-Fauci and Mr. Jake Tapper actually came out and Corrected This US Administration, instead of-always-evading-and-on-purpose-giving-out-Blatantly-False-Information!!!

Beezos also called out the “Ministry of Truth” on Twitter. Placing my bets that the Disinfo Governance Bd is a big dud.