A 10 year old would have placed 4th

NEW YORK CITY, NY – A 29-year-old biological male who claims to identify as a female managed to snag the first place win at a cash prize women’s skateboarding competition this week, leaving a 13-year-old girl in second place with his entry into the competition.

Richard Batres, who goes by Ricci Tres, is a 29-year-old Navy veteran and father of three children, who he had with his now-ex-wife. Tres was denied from Olympic qualifiers back in 2021 for having too much testosterone floating around in his system.

And while Tres’ Olympic endeavors may have been stalled, that hasn’t stopped him from beating the biologically female competition at women’s amateur skateboarding events.

On June 25th, Tres won first place at the Boardr Open at New York City Womens Finals, collecting a $500 cash prize in the process. In second place was 13-year-old Shiloh Catori, who walked away with a $250 cash prize.

Obviously, Catori wasn’t the only biological female – and young kid, at that – who suffered a bump down in ranking at the event thanks to the broad-shouldered Tres muscling his way into the women’s competition.

Needless to say, the fact that Boardr Open allowed for a biological male to face off against biological women – many of whom were less than half his age – has stirred up some strong opinions.

Skateboarder Taylor Silverman was among those perturbed over the farce of a competition held in New York City, taking to Twitter with, “Male wins women’s skateboarding finals and money at the Boardr Open NYC presented by DC today.” 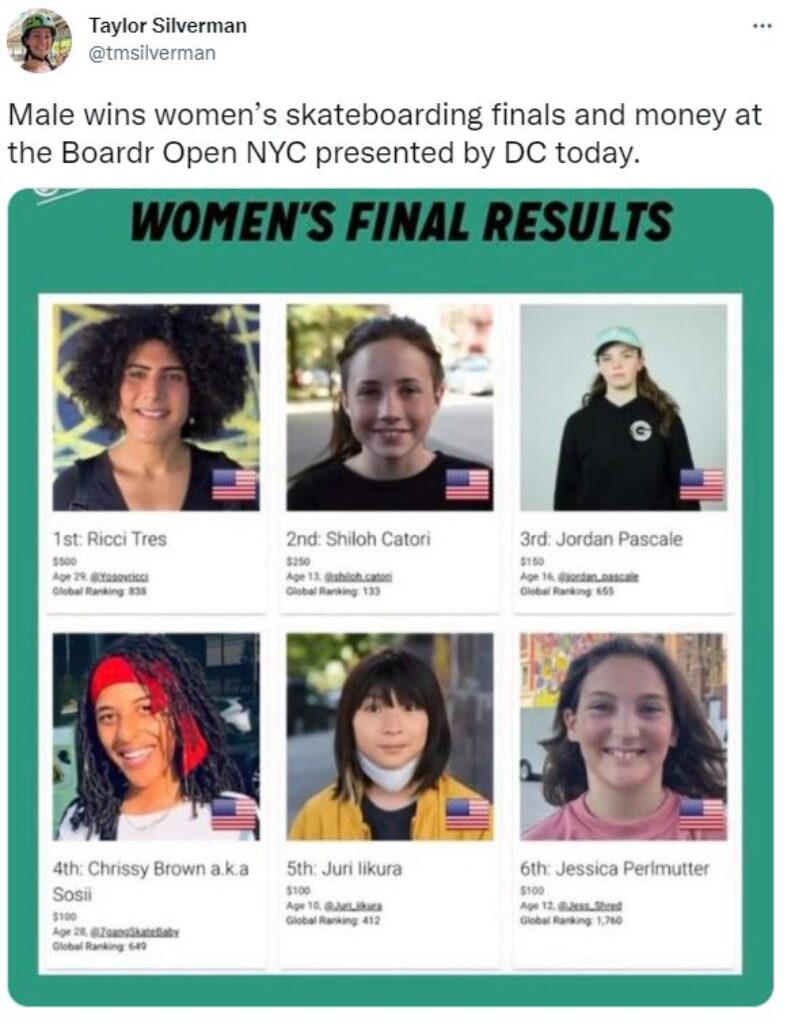 Silverman, who is also a biological female, knows all too well about the unfair advantages posed by male competitors participating in women’s skateboarding competitions.

Back in May, Silverman faced a situation where she ended up losing thousands of dollars in professional competitions due to transgenders being allowed to compete alongside her. She took to Instagram to explain how she competed in “three different contests with trans women, two of which I placed second.”

Silverman had even reached out to Red Bull to decry the practice of her and other women having to face off against male competitors in designated women’s events, telling the company in a letter, “This took away the opportunity that was meant for women to place and earn money.”

While there were the expected lashing outs from those indoctrinated into the trans ideology when Silverman spoke out in May, she’d also received a healthy amount of supportive messages for addressing the clear injustice impacting women’s sports.

More pushback has been mounting up against men in women’s sports as of late in general, with the controversy of UPenn swimmer Will “Lia” Thomas having sparked a considerable amount of momentum on that front.

The conundrum of Thomas eventually wound up resulting in FINA barring biological males who went through male puberty from participating in women’s swimming events, thereby ending Thomas’ chances of competing in the Olympics as a purported woman.

trans need their own games, like the one’s for special Olympics. they are not competing as nature male or female – call it the baphomet games. u want to be special, u ought to be recognized for what u are and proud of it.

Hunter Biden Bombshell Leak: They’re Not Telling You Everything