The naked protesters are at it again, this time supporting abortion at a Women’s National Basketball Association [1] game. On Tuesday during the New York Liberty and the Minnesota Lynx game at Barclays Center, several women rushed onto the court with their shirts off but green paint over their breasts. Other women in the stands held up pro-abortion signs.

In addition to green paint on their chests, multiple women had disturbing blotches of red paint in the crotch area of their shorts, simulating blood.

The women had to be escorted off of the court, with one literally being dragged out by a female security staff.

This is the most recent action of the group Rise Up 4 Abortion Rights, who is hosting these protest acts and posting on their social media and website [2] about the women participating being “brave.” [3]

In addition to the deranged image, the group tweeted, “This was the audience we wanted. We aren’t protesting to change the hearts & minds of woman-hating fascists. No. We are calling on those who can stop the overturning of #RoeVWade: THE MILLIONS of ppl who support #abortionrights. YOU! No business as usual. Shut the country down!”

This statement, plus website postings, indicate that there are more of these grotesque protests planned. Choosing a low attendance venue such as a WNBA game indicates that no event is safe from having to see one of these in person.

“No matter what your political background, race, nationality, religion,” one woman who ran across the basketball court on Tuesday said in a social media video [3], “YOU have the right over your own body. Leaders, political legislatures, WE ARE NOT YOUR INCUBATORS.” 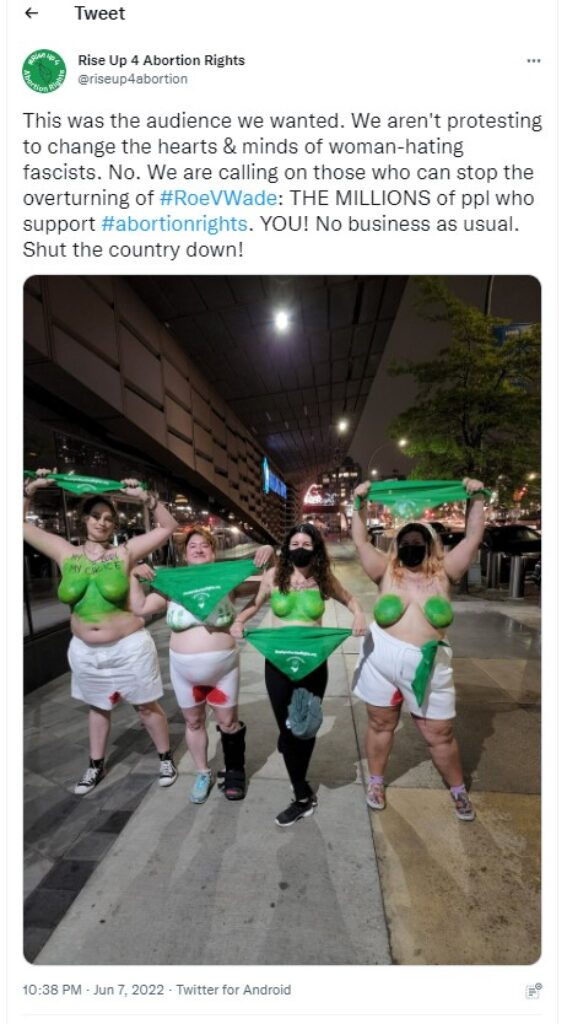 One of the group’s commonly used signs reads, “Abortion on demand & without apology,” and another is “Forced pregnancy is female enslavement.”

Further, a blog post from the website from May of this year reads, “We will make clear to the woman-haters on the Supreme Court and everywhere else that if they take away the right to abortion, their society will be prevented from functioning at all. We will NOT go back!”

No charges have apparently been filed against the naked women.

Earlier this week, Red Voice Media reported [5] on half-naked protesters stripping down to their bras and underwear at a church service in Houston. Pastor Joel Osteen’s service at Lakewood Church was interrupted by the women shouting things like “My body, my fucking choice,” and “Overturn Roe? Hell no!”

Here’s the video from that incident again in case you missed it.

The protests of course started up when a draft Supreme Court opinion regarding the 1973 decision in Roe v Wade was leaked, showing the potential for the ruling to be overturned. This would mean that the issue of abortion would be left to each individual state to decide, but those who are adamant that women should be able to kill their babies no matter where they live fear, rightly, that many states would make abortion illegal [6] or at least severely restricted in their state should Roe v Wade be overturned.