When they show you who they are, believe them.

WASHINGTON, DC – Earlier in June, the Supreme Court issued a landmark decision that falls within the realm of school choice advocates, as the high court affirmed parents have a right to enroll their children in religious-based schools using pre-allocated education funds to cover tuition.

And like clockwork, some on the left who loathe Christianity are speaking out, this time by calling for Satanic schools to be erected so they can enroll their kids in such places under this very same Supreme Court ruling.

In the case of Carson v. Makin, which was decided on June 21st, the Supreme Court examined with the state of Maine’s tuition assistance program violated the Constitution by excluding private schools whose curriculum revolves in part around religion while providing student funding for non-religious private schools.

According to Chief Justice John Roberts’ opinion in the rendered decision, it was sort of a no-brainer in that if one sort of private school is eligible for tuition assistance for students while another is not – with the deciding factor being based solely on religion being settled in a curriculum – then this serves as blatant discrimination against religion.

MORE NEWS: Gingrich Calls Mar-a-Lago Raid a ‘Dictatorship of the State Against the American People’

“There is nothing neutral about Maine’s program. The State pays tuition for certain students at private schools—so long as the schools are not religious. That is discrimination against religion. A State’s antiestablishment interest does not justify enactments that exclude some members of the community from an otherwise generally available public benefit because of their religious exercise.”

As noted earlier, this serves as a monumental win for those advocating for school choice, as this can behoove parents looking to use pre-allocated education funding for religion-based schools – be they Christian, Catholic, Muslim, or any number of other religions.

So what does the left do when they catch wind of this? Outside of doing an abysmal job of claiming this somehow runs afoul of the jurisprudential concept of separation of church and state, they’re running the idea of Satanic schools up the proverbial flagpole.

Wajahat Ali, a columnist for The Daily Beast, was among those smugly posing the concept of Satanic schools being funded, writing on Twitter, “Do Maine taxpayers have to fund a Church of Satan school? I mean, based on the Supreme Court ruling the answer would have to be yes, right,” with one woman responding, “Sending my kids there!” 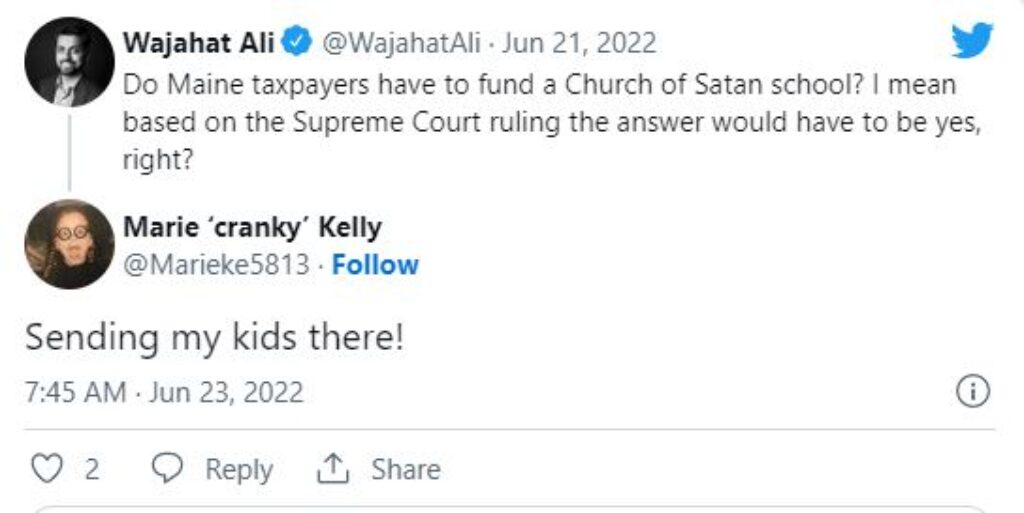 Another Twitter user was among those championing the idea, writing, “The Church of Satan is trending because now, Maine’s tax dollars must fund their religious schools, according to their new laws. As an atheist, I’m totally okay with this. Religious freedom, right? So, [Hail Satan] and have some satanic-looking Sahara horned vipers!” 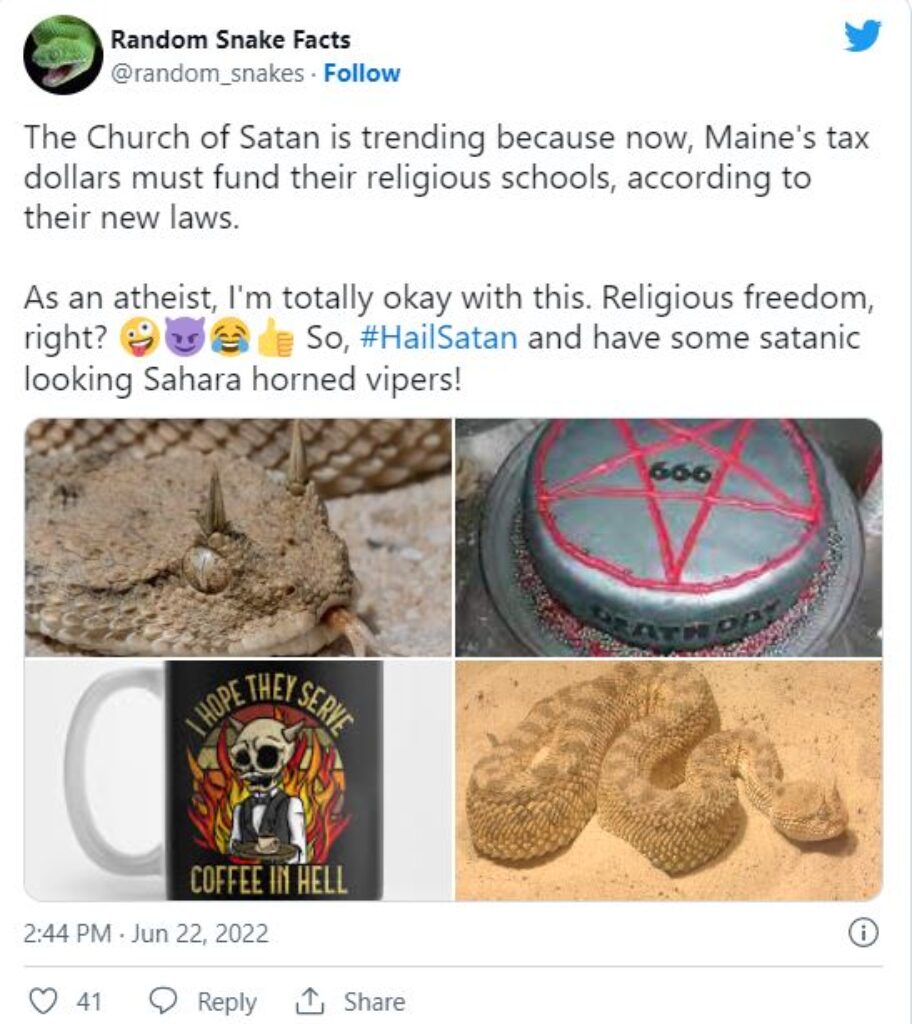 While the likes of these folks are being smug and cheeky, technically, they’d be correct if, hypothetically, there were already-existing brick & mortar Satanic schools where students could enroll for a fee. But if they think taxpayer funds can be allocated to the actual establishing/construction of such a school, they’d be bummed to learn that the SCOTUS decision rendered on June 21st does not equate to that scenario.

taxpayer dollars should fund students who attend schools that provide demonstrable ability to educate in the basic skills of reading writing & arithmetic. Any public schools that fail to do this should be restricted from receiving funds.