Rosen poked fun at Rep. Crenshaw over his affiliations with the World Economic Forum, an association that Rep. Crenshaw has denied in the past [1]. Yet, he was at one point named on a list [2] of Forum of Young Global Leaders from 2019, which is a non-profit organization launched by Klaus Schwab back in 2004.

Rosen was eventually approached by an individual at the event, where the individual accused Stein of assaulting people while heckling Rep. Crenshaw.

The videographer eventually redirected his attention to people gathered inside of the convention center hall, claiming that Rep. Crenshaw is a “sellout” and reiterating that the Texas congressman is beholden to the World Economic Forum.

While some were slightly peeved over Rosen voicing his opinion about Rep. Crenshaw, others joined in lambasting the congressman, with some shouting angrily over Rep. Crenshaw supporting red flag legislation.

The incident has already been picked up by far-left outlets like Mediaite, who’ve mischaracterized the interaction [3] as Rep. Crenshaw and his staff being “assaulted by right-wingers.” Caleb Howe writing for Mediaite, asserted that Rep. Crenshaw was “violently confronted” by “far-right social media activist Alex Stein and others whom witnesses described as Proud Boys.”

While Stein was among those heckling Rep. Crenshaw, calling him “Eyepatch McCain,” video of Stein’s interaction shows Rep. Crenshaw’s staff manhandling the conservative commentator rather than Stein himself trying to assault anyone.

Following the encounter, Rep. Crenshaw took to Twitter, calling out Stein while sharing the Mediaite article, writing, “This is what happens when angry little boys like [Alex Stein] don’t grow up and can’t get girlfriends…” 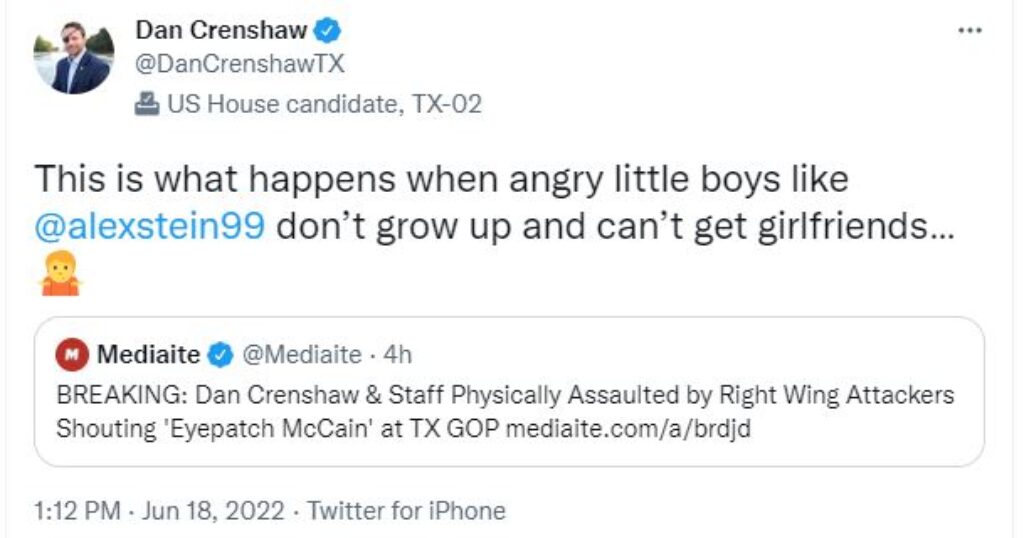 Some of the responses were generally mocking of Rep. Crenshaw, but independent reporter Tayler Hansen called out the Texas congressman for sharing an article that falsely accused Stein of assaulting him and his staff, writing, “Btw, you didn’t get assaulted, but you know that. Your security assaulted [Alex Stein] multiple times, and it’s on video. Why are you so scared of a few questions? It’s almost like you’re a bad guy or something..” 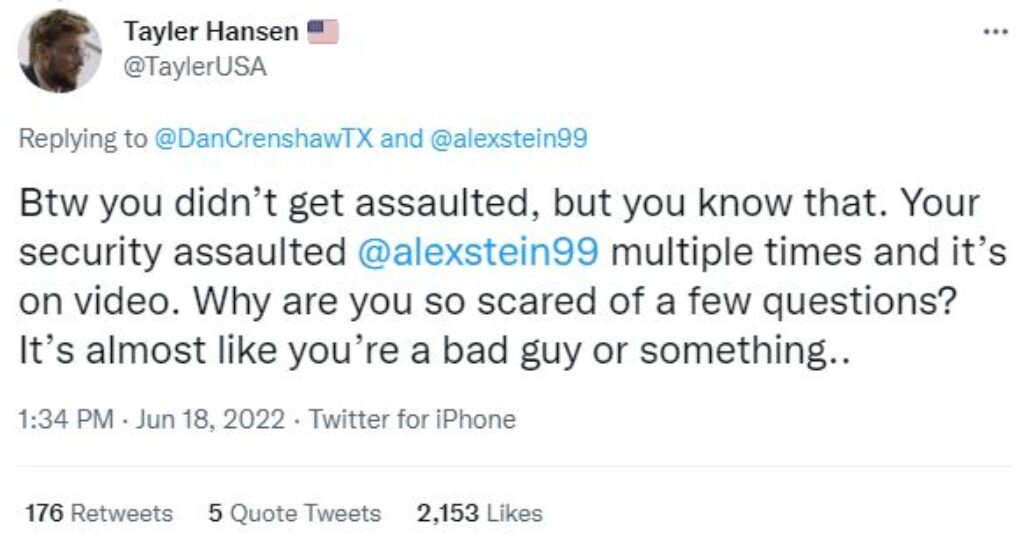