ARIZONA – A Trump-endorsed candidate running for the U.S. Senate, Blake Masters, has managed to spark controversy and raise some eyebrows regarding comments he made on a podcast where he cited “black people” as being among the critical demographic contributing [1] to the “gun violence problem” in the United States.

Masters had appeared on the April 11th episode [2] of “The Jeff Oravits Show,” where the topic of gun violence was brought up. During the discussion, Masters conceded that “we do have a gun violence problem in this country, and it’s gang violence.”

The senatorial candidate expanded upon the notion of gang violence being synonymous with gun violence, adding, “It’s people in Chicago, St. Louis shooting each other. Very often, you know, black people, frankly. And the Democrats don’t want to do anything about that.”

While there is limited national data on specifically gun-related assaults/homicides committed in the United States that is broken down by race, the most recent available data from the FBI Uniform Crime Reporting (UCR) program’s “Table 43 [3],” which is 2019, does note that 51.2% of recorded “Murder and nonnegligent manslaughter” offenses were committed by black offenders.

As for the realm of mass shootings, per a March 2021 report [5] from Becker News, approximately 73% of accused mass shooting suspects from 2020 were identified as black Americans.

Roger Sollenberger, who authored the piece for The Daily Beast that bull-horned Masters’ comments, took to Twitter on June 5th promoting his article while claiming that what Masters alleged during the podcast is “false and deranged.”

“Rarely are Republicans so explicit about their bullshit counterarguments. But please read this whole report because there’s more to this guy. What Masters says is false and deranged, frankly.”

Apparently, Sollenberger grew incensed over some of the replies he received in the comments section of his Twitter post, accusing people of being “racists” for explaining that while Masters’ comments were perhaps unsavorily blunt, there is a significant issue within the black community regarding gun violence.

“Buncha racists in the replies here seem really happy to point out that Black people are killing each other. Anyway. Blake said THE gun violence problem in the U.S. is ‘gang shootings.’ ‘Black people.’ Not one among other problems. Not an outsized representation. The only problem.”

Sollenberger has since been ranting on Twitter about being presented with evidence showcasing that gun violence committed by and impacting black Americans is “racist,” posting on June 6th that even “facts” can be “racist.”

“As if Blake Masters or any of these people even *pretended* to give a fuck that Black people are shooting Black people, or that it means anything to them at all outside of a trick to score a decontextualized rhetorical point. Facts can and do serve racist agendas, folks!” 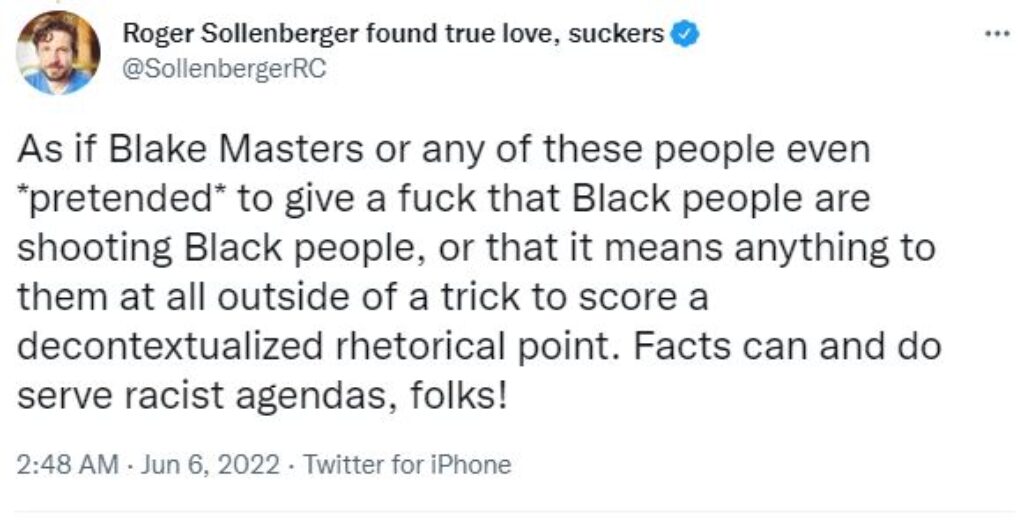